On October 3-4, ITMO University hosted ITMO DigiEduHack, a hackathon on digital education organized as part of the European Commission’s major initiative. The event brought together dozens of teams from the UK, Italy, Finland and other countries that collaborated on projects in the field of digital education. ITMO University became the only hackathon’s venue in Russia. The competition in St. Petersburg gathered over 100 participants: students, lecturers, university graduates, school children and professional programmers. 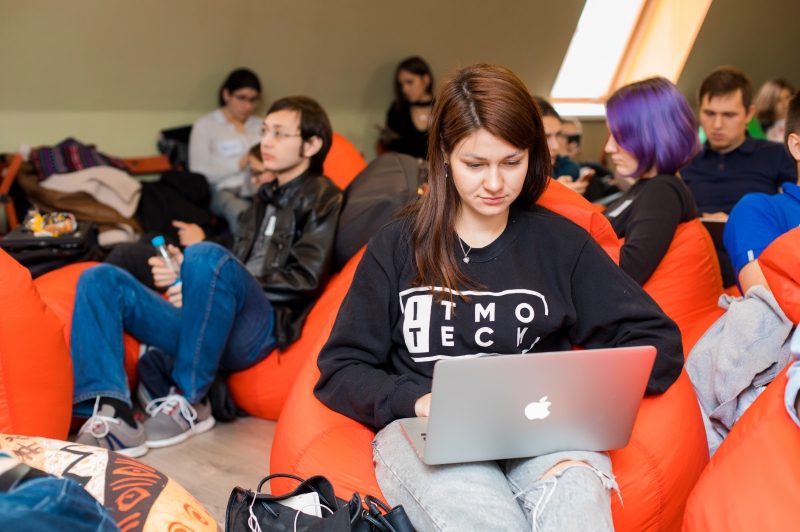 Coordinated by Aalto University (Finland) with the assistance of EIT Climate-KIC, DigiEduHack aims to consolidate a global community of experts, as well as to develop and promote the most promising projects in the field of digital education.

On October 3, this global initiative brought together hundreds of participants from all over the world, making up some 50 teams which took part in hackathons at various venues around the world. ITMO University became the only hackathon’s venue in Russia. Organized by ITMO University’s Department for Educational Policy with the support of ITMO University’s Entrepreneurship Center, ITMO DigiEduHack involved ITMO University Bachelor’s, Master’s and PhD students, as well as professional programmers, lecturers and researchers, and even two school students’ teams.

The hackathon’s participants could try their hand at three tracks: Artificial Intelligence in Education, VR and AR in Education, and Gamification in Education. The competition lasted for 24 hours. In the course of this time, the participants had to develop an educational innovation in the field of education and present it using modern technologies.

When the hackathon came to an end, the participants presented their results to the jury, made up of ITMO University representatives, as well as the hackathon’s partners: QIWI, Grid Dynamics, Modum Lab, IC LAB, and NTI University 20.35. Apart from that, each team had to upload the concept of their prototype in English, a picture of their product and, optionally, a link to their product’s website to their personal account on DigiEduHack’s official website. The best participants from Russia will then compete for the main prize of 5,000 euros for the implementation of their projects with participants from other countries (read this article to learn more about the hackathon’s rules and program).

Apart from implementing their original ideas, the participants of the hackathon worked on cases provided by ITMO University’s facilities and laboratories, NTI University 20.35, and the event’s partners.

The Evolve school team, made of Dmitry Ioksha and Artyom Prokhorov, came to the hackathon with their own idea. They developed a service that can predict whether a student would be expelled from the university or not.

“We have already participated in a number of hackathons before, including those organized by ITMO, and even won at some of them. We decided to take part in ITMO DigiEduHack first of all because it is international. And we chose the track related to AI because we had already worked with similar systems,” share the school students. “By the end of the hackathon, we developed a telegram bot, which is, in fact, some sort of a test poll: you start a dialog with it and answer its questions, and then the bot collects information about you, analyzes it using a neural network, and tells you if it’s likely for you to be expelled or not.”

In the future, the members of the Evolve team plan to apply for programs related to programming. Dmitry Ioksha notes that he has already chosen ITMO University.

The participants of the track “VR and AR in Education” were offered to create a virtual laboratory for natural science disciplines, a platform for conducting exams in the VR format, as well as a method that would allow for using VR and AR technologies for studying programming and robotics of humanities.

“We developed our project in two directions at once: on the one hand, we added AR elements into it, while on the other, we used gamification to keep it interesting for our users. The game uses the mechanics of the Pokemon Go game, and unlike the majority of projects in our track “VR and AR in Education”, which tie the user to a specific place, we encourage them to travel a lot. We developed the concept for eight disciplines, including chemistry, biology, physics, computer science, history, social studies, and astronomy,” says Gleb Novikov.

The QIWI company presented their own case for the track “Gamification in Education”. Its main goal was to create a product that would be interesting for 10-16 years olds and would help them hone their literacy skills in a game format. The participants who chose this case were asked to develop a game (a mobile app) in Russian and English, aimed at helping the users improve their financial and digital literacy. What is also important is that the game should have different levels and modes and the users should be able to share their results on social media.

A group of ITMO University staff, lecturers and students from the FLS Team team (Alexander Isaev, Maxim Bazanov, Evgenia Slasten, and Alexandra Simanovich) developed a service for teaching programming in a game format.

“We all work in the same company, First Line Software. That’s why we decided to participate in the hackathon together. We had long been thinking about taking part in such a large-scale event, and ITMO DigiEduHack gave as this opportunity. We chose this track because here it’s pretty easy to come up with something really interesting without spending too much time. We developed a programming learning platform. Keeping it short, you have any integrated development environment that you want to use for your programming language; you download a plug-in, sign up on the portal, create an account, and then just follow the plot of the game, acquire new knowledge, fight monsters and do your best to survive,” explains Alexander Isaev, an FLS team member, associate professor at ITMO University.

ITMO University’s Faculty of Technological Management and Innovations tasked the participants with developing a concept and prototype of an educational (business) game. Here participants had to deal with the situations where they were tasked with allocating the shares in an entrepreneurial project or startup, but in a well-thought-out and balanced way and not just 50/50 and using specific methods and technologies. The game should also emulate the real-world state of affairs on the technological market.

Apart from that, the teams could develop a gamification scenario for conducting university surveys or choose another case provided by ITMO University staff or the hackathon’s partner companies. The full list of cases is available in the event’s official VK group.

As a result of the hackathon, the judges chose three winning teams, one per each track.

Emerging as the best in the “Artificial Intelligence” track was the project of Anna Avdyushina and Sergey Milantiev, Master’s students at the Faculty of Software Engineering and Computer Systems. They proposed an online service Answer Way for the analysis of questions from user forums and visualization of analytical data on the most popular topics.

“We’re interested in Data Science, and as soon as we heard about the hackathon, we’ve come up with the idea of our project. Its main goal is to help students and those who develop online courses identify the gaps in this or that field. Roughly speaking, there are situations when users can’t find something on the internet by just googling it, and they resort to forums and ask their questions there. We collect information from these forums, analyze these questions and thus can identify the fields where problems occur and which it’s worth paying attention to when developing educational materials. We plan to further develop our project after the hackathon as there is a range of complex aspects we need to work on, and in the future, we plan to focus on online resources and propose a special technology. Apart from that, going forward the project can be expanded to other fields, not just programming,” say the members of the Starlight Memories team.

The “VR/AR in Education” track was won by the team Lonely Whales. Anna Kartashova (third-year student at the Infocommunication Technologies Faculty) and Anastasia Usakova (fourth-year student at the Faculty of Software Engineering and Computer Systems) developed an educational platform Save Me, which features game elements to enable the immersion into emergency situations for teaching first-aid techniques.

T.O.A.S.T., a team of Master’s students from the Institute of Design and Urban Studies, was recognized as the best in the “Gamification in Education” track for their solution of the case submitted by the company QIWI. Trofim Kremen, Oleg Lavrov, Artyom Anisimov, Stella Moslem, and Temirlan Dzodziev proposed the game draft Digilit aimed at the development of digital literacy among high school students.

It is these projects that will be considered by the international jury of DigiEduHack after the conclusion of the hackathon. The winning teams will compete for the main prize worth 5,000 euros alongside their international counterparts.

Apart from that, the authors of the best solutions were awarded prizes from partner companies, invited to participate in ITMO’s Accelerator program and are to receive consultations on the development of their projects from experts of ITMO Entrepreneurship Center.