How Not to Fall For Fake News

We’re joined by researcher Arseniy Tretyakov and Maksim Tovkailo, a co-founder of the Fakecheck.ru fact-checking service to find out how not to fall victim to fake news. 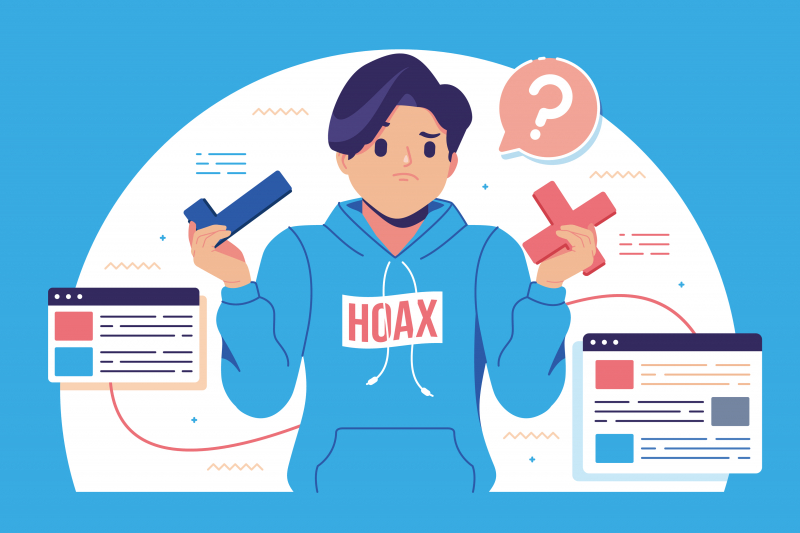 Fake news is a phenomenon found in every sphere – from the entertainment industry to politics and science. And while some of it may simply give us a laugh, other times it may harm someone’s health or ruin their reputation.

It became a hot topic long before the pandemic. For some years now, scientists have been looking into the effectiveness of fact-checking and the scale of misinformation found on social media.

But the coronavirus has made the issue even more severe. To emphasize the extent to which unreliable information has spread, the WHO has begun to use a special term – infodemic. Today, researchers continue to study posts about COVID-19 on social media.

As social networks grew in populatity, fake news has spread further – for now it can be spread not only by its creators, but via regular users who feel compelled to share these eye-catching headlines with their friends. And that’s not to mention the special bot accounts that exist solely for this purpose. Fighting fake news and verifying the authenticity of online news is the task of analytics agencies all around the world; but it’s important for social media users and news consumers to understand that some of the information they’re presented with may be false.

First of all, it’s important to read beyond the headline and familiarize yourself with the actual text of the article. Then, you can start looking for signs that let you know whether the source of this information is trustworthy. We’ll discuss some of these signs in the article below.

Then, joined by Arseniy Tretyakov, a researcher of fake news, and Maksim Tovkailo, a co-founder of the Fakecheck.ru fact-checking service, we’ll find out how individuals and entire agencies tackle the fake news epidemic.

What to pay attention to

The American non-profit organization NPR points out on its website that stopping the spread of fake news is not only the responsibility of the platforms on which it is spread, but of those who consume it, too. Citing advice from Melissa Zimdars, an assistant professor of communication and media at Merrimack College, and Alexios Mantzarlis, director of the International Fact-Checking Network at Poynter, NPR gives the following advice on how to read news the right way:

To learn more about the definition of fake news and how this subject is studied, we attended Arseniy Tretyakov’s talk that he delivered as part of the Digital Humanities Center’s series of research seminars.

Arseniy Tretyakov is a PhD student at the Universidad Carlos III de Madrid, where he’s working on a thesis about ways of detecting Spanish-language fake news and misinformation with the use of machine learning. Arseniy is also a lecturer at ITMO University’s Master’s program Data, Culture and Visualization. Earlier on, he and his colleagues had developed a way to identify fake news in the Russian language using artificial intelligence methods.

He suggests defining fake news as false information about a given event that has been published online or in print media.

“Sometimes, print media make mistakes and publish retractions later. Fake news is not a new concept. Yellow journalism and hoaxes have been around forever. It’s just important to understand that fake news can lead to real, negative consequences, and is therefore legally punishable,” says Arseniy Tretyakov.

It’s also news that has been recognized as false by fact-checking agencies, moderating staff of social networks, media monitoring organizations, or courts. Among these are The Poynter Institute’s PolitiFact.com or FactCheck.org. In Russia, a new service called Fakecheck.ru was launched earlier this fall.

Arseniy points out that fake news becomes such when people begin to propagate it. That’s why it’s important to understand the goals of those who create it.

“Without a goal, fake news is just satire. That’s why it has to be discerned from “accidental” fakes – parody news sites or meme pages,” he says.

He also describes a few common traits of fake news:

During his seminar, Arseniy Tretyakov also spoke about various services such as Grover, which generates fake news in order to be better at detecting them, or the Fake News Generator, which can make fake news based on a template. Then there are neural networks that are able to create fake headlines.

“Grover, for instance, is made with neural networks. It’s open access text generation tech that can easily be found on GitHub. For now, only its headlines are more or less comprehensible, but it can be used for some kinds of actual news, such as weather forecasts or short sports reports,” he explains.

According to Arseniy, the difficulties associated with studying fake news stem from the fact that oftentimes neither the headlines nor the actual text are any different in style from “legitimate” news. One reason is that many outlets write in a specific signature style.

There are a few:

One method that works well, says Arseniy, is tone analysis – checking the text for its levels of negativity, positivity, or irony. This method works well when analyzing text because fake news and misleading comments are more likely to be written in a sardonic tone; negative comments, naturally, also contain plenty of negativity.

Another solution is to accumulate a database of fake data and classify it for further research, such as content analysis. To that end, researchers can develop methods of finding entities (persons, names of organizations, groups, etc.) in unstructured texts. When processing natural language, this will help separate “regular words” from names and titles and therefore better identify fake news and figure out the most common subjects.

According to Arseniy Tretyakov, the best way not to fall for fake news is simply not to get your information from dubious sources. But if you’ve encountered a news report that has made you suspicious, you can visit a fact-checking website or, if it hasn’t been checked yet, even submit it for analysis yourself.

No such thing as black and white

Founders of the Fakecheck service believe that there are indeed cases when it’s difficult to say for sure whether a piece of news is true or false. There are plenty of cases such, especially because news stories are often a mixture of truth and errors. Fakecheck rates news stories based on its own “fake-o-meter,” which features labels such as: “True,” “Mostly true,” “50/50,” “Disputed,” “Fake!”, “Satire,” “Careful!”, and “No assessment”.

Maksim Tovkailo, a co-founder of Fakecheck, explains that a fact-checker can’t be an expert on every subject. Their job is to verify facts by analyzing them and consulting respectable sources. For instance, when verifying a news story about a scientific study, the fact-checker cannot confirm or disprove an experiment described within.

“Their task is only to make sure that such a study has been carried out and that the media have correctly represented the facts presented by the scientists. Fact-checking is about reliability, too, but it’s very important to understand that this reliability is ensured by analyzing how carefully authors deal with facts and how they interpret them,” explains Maksim Tovkailo. “A fact-checker can find out whether such a study even existed in the first place and assess how well it’s been interpreted and retold by journalists.”

Maksim’s advice is to pick reliable sources of information that you can trust. And it’s better to have several. In his words, reliable news organizations don’t indulge in flashy, clickbaity headlines, use correct, formal language, and cite their sources. It’s also important to make sure that the text is logical, coherent, and accurate in its conclusions and facts. If the story describes a conflict, make sure that the situation is described from all points of view.

“Critical thinking is important in any case – any text may contain errors, especially if it’s a large one. Don’t hesitate to google things and check their veracity if you don’t feel entirely confident in what you’ve read,” he concludes.