On the day prefacing the start of this year’s St. Petersburg International Economic Forum (SPIEF), in an event held at the A.S. Popov Central Museum of Communications, Rostelecom unveiled a prototype of Russia’s first quantum-encrypted data transmission network. This data transmission mechanism is considered to be the safest one out there, as the keys protecting the traffic cannot be intercepted or stolen because of the laws of quantum physics. ITMO University is one of the developers and suppliers of state-of-the-art equipment. 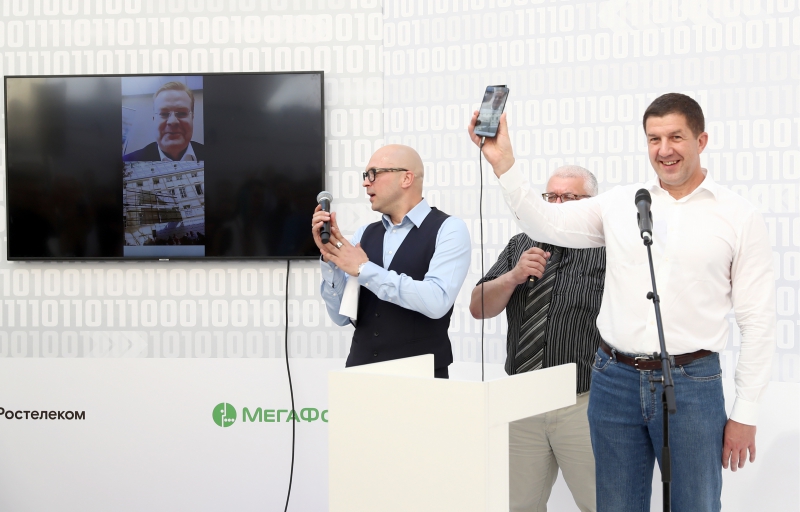 The presentation of a new network by Rostelecom. Credit: forumspb2019.tassphoto.com

For the first time in Russia, Rostelecom presented a prototype of a multinode and multivendor network operating on Russian encryption technology. This network uses the equipment and solutions developed by a number of Russian research centers and companies, ensuring their smooth interaction throughout the whole data transmission process. The system operates on several nodes, allowing for the technical possibility of connection of a multitude of users regardless of the location of their offices and the quantum-key-distribution cryptography equipment used. All these elements make the system truly unique. After a year of intensive training on simpler samples, Rostelecom and its partners on the project have finally presented the technology to the wider public.

As it is widely known, digital economy is founded on the use of data. The higher the value of this data, the more there are of those who want to exploit it. Stealing, leaking, and destruction of data can all lead to consequences the severity of which can be frightening to even think of. Our subsidiary company Rostelecom-Solar detected over 765,000 computer attacks in 2018, which is 89% more than last year. Quantum solutions provide the highest degree of data protection known today. That’s why Rostelecom decided to focus on this topic and become the leader in introducing these technologies in Russia. The results of our work allow us to forecast the launch of the first quantum-encrypted commercial services in as early as 2020,” notes Mikhail Oseevsky, the president of Rostelecom.

Encryption is needed to protect the data transmitted from one point to another. Keys are the element integral to this process. The problem with keys, though, is that there are a multitude of ways one can obtain them illegally, be it stealing, buying or overhearing. That is why the tenacity of the encryption system based on that specific key is often put at risk. Quantum encryption provides a solution to this problem; with it, the keys no longer have to be handed over in envelopes, vaults or with security guards. Quantum keys are transmitted via (or near) the same network that the data itself is transmitted. The defining feature here is that these keys cannot be intercepted or stolen. This is ensured by the laws of quantum physics.

The technology draws on the physical properties of photons, as it is these elementary particles that underlie the process in which the keys are created. The photon can exist in different states, which can be designated (or interpreted) as 0 and 1. Such randomly generated single-photon states are transmitted via fiber optic links from one node to another, and afterwards, using a special algorithm based on information about the state of the photon, digital keys are generated at network nodes. Should an attacker attempt to intercept a photon on the way from one node to another, the photon will, due to its physical properties, change its state, prompting the key generation algorithm to report the problem and the exchange of reliable key information between the nodes will be stopped.

“It is with great pleasure that ITMO University accepted Rostelecom’s offer to cooperate on that special project. Back in the day, in 2014 we’d become the first in Russia to connect our university campuses to a quantum network, and this led to the rapid development of the technology. Nowadays, the technology that we use is different from its counterparts used all over the world, from Switzerland to the US and China. Whereas our international colleagues opt for transmitting single photons on its base frequency, we use a unique patented technology that operates on side frequencies, allowing for a substantial increase in both the speed and the distance between the networks,” explains ITMO University rector Vladimir Vasilyev.

The prototype network in St. Petersburg consists of nodes located at Rostelecom’s laboratory on Sinopskaya embankment, in the SafeNet engineering center on Aptekarsky Prospect, and the A.S. Popov Central Museum of Communications on Pochtamtsky Lane. All of them are connected via high-speed fiber optic links provided by Rostelecom. The quantum key distribution-enabled protection of data is organized using only domestically-produced solutions: the prototype presented was run using equipment made by ITMO University and the Russian Quantum Center.

“ITMO specialists’ work in the field of quantum communications dates a long way back; the University built its first functional network in 2014. After that was achieved, we moved on to the question of how to make this technology manufacturing-ready and fit to be integrated into the networks of communications providers. The significance of the process comes from the fact that this is applied work conducted within the complex framework of the interaction between a communications provider and its equipment against the larger context of telecommunication networks with all of their specifics. This is the next step that symbolizes the integration between science, the industry and communications providers, which allows us to establish a smooth, full-cycle provision of services to the end client,” comments Artur Gleim, the main developer of the system and head of ITMO’s Quantum Information Laboratory.

“What Rostelecom carried out today was a comparative demonstration: each participant (ITMO University and Russian Quantum Center) had its node located away from the main node in the Museum of Communications. The principal goal of the presentation was to show that Russia has not one but two fully operational systems and that these are capable of successful interaction between them. At present, work is still being done to develop common standards for different systems since the latter aren’t yet capable of “seeing” each other, but in this experiment they do meet in one place. Rostelecom run a number of comparative tests prior to this demonstration, and our system proved to be the most effective one. Today, the company presented the country’s two leading systems in action to the wider public. Rostelecom has big plans on rolling out large-scale sections of protected networks spread between different centers, and we aim for our system to find its use. Right now, the company and we are in the stage of active negotiations on the matter; we are doing our best to ensure that the equipment provided suits Rostelecom’s technical requirements. We hope that, as the company advances in the implementation of its road map, we will be advancing with them,” comments Vladislav Bougrov, head of ITMO University’s School of Photonics.

According to Boris Glazkov, vice president of Rostelecom, enriching the classic encryption system with the quantum one means that the encryptors will be able to resist the recording and consequent deciphering of traffic by malefactors. At the same time, it leaves human error factor out of the picture, preventing the very occurrence of the keys being stolen: it is not people but the network nodes that deal with the keys from here on now. Any intrusion in the system will be detected straight away from the change in the key’s state.

“The system presented is as close to what communication providers use in the real life as possible. The first aspect that ensures this is the fact that there is a sizeable number of vendors, the second is that we operate with Russian-made equipment, and the third is that the system uses domestic encryption technologies as prescribed by both the state and corporate customers. This technology is more true-to-form to the real practice of quantum encryption in Russia than any other analogue existing in the country,” explains Boris Glazkov.

As soon as next year, Rostelecom plans to launch commercial services using the quantum key distribution technology, which, according to the experts, guarantees the highest level of data transmission protection out there.

“Above all, this technology will find its use in the state corporate sector; we also expect significant demand from the finance sector and the state administration system. We are also aware that both in Russia and internationally, another active consumer of this technology are banks, which pilot a lot of solutions based on quantum protection. These solutions will go on to spread to other sectors. We are confident that this development will come in handy in telemedicine, a field highly sensitive to the transmission of medical data in real-time mode. It is also certain that data processing centers will in the future be also interconnected via such protected communication channels,” shares Boris Glazkov.