In early April, the startup pitch-session “Smart City. New markets for Russian startups: exploring North Rhine-Westphalia” took place as part of the 16th week of Germany in St. Petersburg. ITMO Technopark invited projects that focus on inventions in the field of smart cities, transport infrastructure and waste processing. Entrepreneurs presented their ideas to the business communities of Russia and Germany and received valuable feedback. 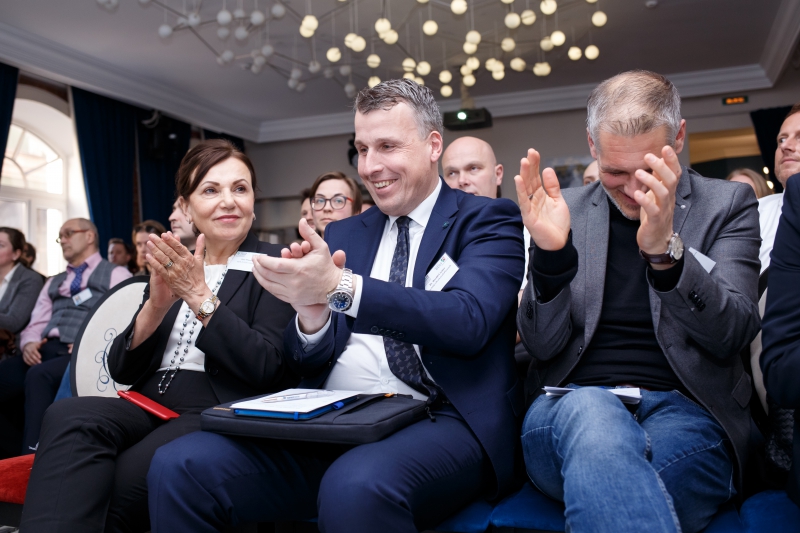 A pitch-session is a popular format of startup events where you can present your project to investors and get feedback, prizes and useful contacts in return. “Smart City. New markets for Russian startups: exploring North Rhine-Westphalia” brought together companies that focus on technological solutions for smart cities on one side and representatives of major German brands in St. Petersburg such as Siemens and Deutsche Bank on the other.

“Digitalization continues to make its way into our lives, and Russia keeps pace with this trend,” comments Vladimir Nikitenko, Branch Director Northwest at German Russian Chamber of Commerce. “Technologies are being gradually introduced into the operation of governmental agencies and the development of the city in general. Just recently, it became known that St. Petersburg plans to make changes to its transport system and replace all regular buses with electric buses. Another recent initiative has to do with using Big Data for solving the issue of municipal solid waste treatment.”

The issue of waste treatment was among the problems that were brought up by the young entrepreneurs. Apart from that, they also offered solutions in the field of safe driving, urban planning and safe and accessible data transfer. The participants also had to choose the best projects and vote for them alongside the jury. Among the experts were Oliver Weimann, a managing director at ruhr:HUB, Harald Kremer, the head of the cluster of nanotechnologies, microsystems engineering, new materials and photonics of the Federal State of North-Rhine Westphalia, and Elena Matekina, the head of the Central and Eastern Europe and Russia Department at the economic development agency of the German State of North Rhine-Westphalia NRW.INVEST.

The pitch session was organized by NRW.INTERNATIONAL and NRW.INVEST with support from the German Russian Chamber of Commerce as well as ITMO University Technopark.

Digitalization for the development of urban infrastructures

“Let’s say a city wants to build a road it needs,” explains Timofey Volozkiy, the laboratory’s co-head. “Its administration will have two choices: either simply build it and hope for the best or approach an expert and get a forecast. Most choose the second option, but in that they face serious difficulties: such a consultation and the associated software cost from 150 to 300 thousand euros, the analysis takes up to a year and a half, and if any changes are made to the plan, they have to start the whole procedure from scratch.”

The OTS laboratory offers services in the field of modeling on completely different terms: subscription, a user-friendly web-interface and open source simulation modules. The development takes not a year but from four to five months. What’s more, the models account for invalid input in its analysis and updates automatically when they receive new information.

The team’s members have already developed concepts of transport systems for Krasnoyarsk and the Krasnoyarsk Krai, as well as prepared the concept of transport  communication in St. Petersburg during the FIFA World Cup 2018. Among the laboratory’s partners and customers are the Ministry of Transport of the Russian Federation, ITMO University, Peter Service and others.

Today, its members offer the most advanced technology and are planning to develop an AI that will be capable of solving modeling and forecasting tasks on its own.

As their prize, the OTS laboratory got one free day of participating in Germany’s largest exhibition of startups Digital Demo Day. Every year, over 120 teams from all around the world gather in Dusseldorf to exchange experience in such fields as VR/AR, IoT, robotics and other. What’s more, the event offers great opportunities for meeting with potential clients and investors.

Second place went to the International Laboratory “Mathematical Methods in Physics of Complex Materials”. It’s staff member Olga Timokhina presented a waste management system with IoT support for smart cities. In essence, it is a platform for automating separate waste collection. The project implies the deployment of intelligent refuse bins  that are fixed with special sensors throughout the city. These sensors collect data on how full the containers are, which is then sent to processing centers and used for optimizing the routes of garbage trucks. A mobile app will help monitor the state of refuse bins, as well as block and unblock them. You can read more about the system’s technical aspects in one of our previous articles.

Right now, the scientists from ITMO’s Department of Network and Cloud Technologies with support from ITMO University Technopark are developing the platform as part of the CroBoDDIT project, whose organizers plan to promote breakthrough information technologies for the development of urban infrastructure. The project is conducted within the framework of the Russian-Finnish cross-border cooperation program and aligns with the concept of long-term socio-economic development of Russia until 2020. According to their plans, the first intelligent refuse bins will appear in Finland and Russia by 2021.

As their prize, the project’s authors got an opportunity to participate in the RuhrSummit, where startupers present their projects to representatives of German business.

The event’s special prize for an invention in a promising field went to the O2 Lighting Systems company. The company focuses on different lighting technology, including the development of Li-Fi, which might eventually become the main method of wireless data transfer. As opposed to Wi-Fi, it doesn’t use radio waves but rather electromagnetic waves of the visible band. In order to connect to a network, the user connects to a light source via a special transmitter. Li-Fi guarantees the safety of data transfer, makes unauthorized connection impossible and provides for a high interference resilience. You can read more about the technology in our interview with Igor Seredin, CEO of 02 Light Systems.

At the pitch session, the company’s representative Ivan Polukhin spoke in detail about the company’s economic model and the full cycle of components for working with Li-Fi production. The startup develops all the essential equipment: Li-Fi transmitter and receiver modules, as well as routers that can connect to several light sources at once.

As a prize for the team’s work, jury member Harald Kremer, the head of the cluster of nanotechnologies, microsystems engineering, new materials and photonics of the Federal State of North-Rhine Westphalia, offered them support in the development of their project in Germany.

Among other projects presented at the pitch session were the project by the Quality of Urban Life Laboratory (QULLAB) on developing “emotion maps” of a city and the E-CIM, an emotional information model of a city for officials who make important decisions concerning a city’s development (you can read more about QULLAB and its activities here), as well as a platform for creating digital infrastructures of smart cities by the Airalab company.