ITMO University’s business accelerator Future Technologies has recently hosted a pitch session by the business angels club iHarvest Angels. Its aim was to select promising projects to invest in their development. Three winning projects will receive consulting support from leading experts as well as an opportunity to attract financing. 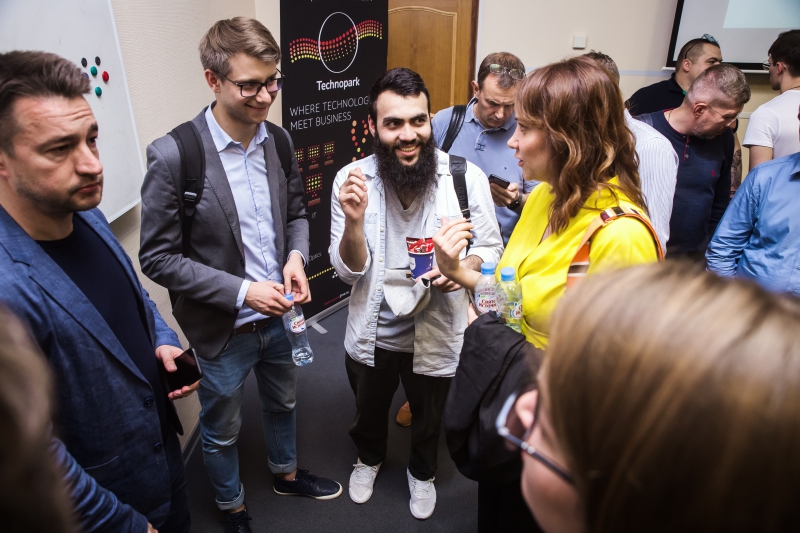 The iHarvest Angels business club is an informal group of 15 local business angels that conduct joint investment, starting at 3 million rubles, in innovative projects that have the potential to be upscaled for international markets. Among the experts are representatives of investment funds working in a wide range of fields, from IT to retail and others.

Coordinating the investment session was Igor Kudinov, entrepreneur and associate professor of practice at ITMO University’s Faculty of Technological Management and Innovations.

“It is for some 10 years already that ITMO University has been actively pursuing the creation and development of innovations ecosystem around itself. It has become in this field one of the leading organizations both in St. Petersburg and Russia at large. As one of the co-founders of the startup VeeRoute, which came from ITMO, I can confidently say that the University does its utmost to support the creation and growth of innovative businesses. It was only natural, therefore, that such a significant investment opportunity be hosted at ITMO, and I hope that the following events will also be held with the University’s contribution,” says Igor Kudinov.

Andrey Myaskov, head of the business accelerator Future Technologies, also expresses hope that this collaboration with iHarvest will give rise to many joint events.

“The accelerator has already completed more than five successful enrolment campaigns, and now we’re working with projects on an individual and continuous basis. Over the years, we have accumulated a large set of very promising projects, which will only expand in the future thanks to our well-coordinated attraction system. And we know that a lot of these projects need investments to fulfil their best potential,” comments Andrey Myaskov.

To participate in the pitching session, aspiring startuppers had to submit an application and undergo selection. Including experts from the Future Technologies business accelerator and representatives of iHarvest Angels, the judges favored the projects that had a well-established team, a completed prototype, and a confirmation of market demand for their product or service. Apart from these criteria, the experts picked the projects that have the potential to develop in the international market. The profile of the projects in question didn’t play any role in their choice. In the end, 12 of the 50 startups that applied to partake in the session were chosen by the judges.

As per the format of the pitch session, participants were asked to give a five-minute presentation during which they had to talk the experts through the main idea of their project, the problem it aims to solve, its competitive advantages over similar offers on the market, as well as analyze the target market, give an overview of the team and set forth their team’s strategy for making their project a reality. After this followed a five-minute Q&A session with the experts present at the meeting.

Participating at the session were two residents of ITMO University’s business accelerator Future Technologies. One of them was the startup Laeneco, the authors of which developed an electronic stethoscope and an app that allow flu-stricken users to conduct independent check-ups of their lungs. In case the device detects abnormal noises, it recommends the user to seek medical help. All check-ups can be recorded and stored in the app’s archive, which also allows the user to contact a doctor from a round-the-clock telemedicine service or make a traditional doctor’s appointment. As highlighted by the startup’s founder Ilya Skorobogatov, the system can allow for timely detection and prevention of pathological conditions.

Last year, Laeneco took first place at a pitch session organized by ITMO University’s Technopark together with a number of Japanese experts. Their win allowed them to participate at the eminent WARAKU SUMMIT in Fukuoka, Japan, where the startup succeeded in obtaining the support of the Japanese government, who approved the technology for launching on the Japanese market.

The startup Funbo was another resident of ITMO University’s business accelerator that got to participate in the iHarvest Angels pitch session. Since its foundation, the project underwent several changes to its concept: the founder, Master’s student at ITMO’s Faculty of Software Engineering and Computer Systems Nikolay Golos, originally planned to organize cybersport games just for recreational purposes. But after some consideration, the team decided to center on the educational aspect, providing training for amateur players.

Last year, the team of Funbo developed their own service aimed at helping gamers of all levels reach the professional level and perform at cybersport tournaments. Joining forces with professional cybersport players and coaches, they developed a course that allows the users to better understand Dota 2 and improve their individual gaming level. What is so unique about the course is that it provides gamers with insider information and real cases from experienced coaches who trained successful cybersport teams.

As of now, the company focuses on two major customer segments: the users who want to become professional players, and those who just want to play in comfortable environments.

“We’re developing in several directions: we help users assemble a team, provide them with training and introduce the tournament aspect. Right now, we see our biggest potential in the assembling of teams,” says Nikolay Golos. “We have already reached the stage where we’re ready to attract our first investments, so it’s important for us to receive feedback from seasoned experts and business angels.”

He adds that at the earlier stages, the project majorly benefited from the significant support provided by ITMO University’s business accelerator Future Technologies. The latter helped the team with building their marketing strategy, analyzing their immediate competitors and target market, and organizing their sales. No less important for the development of the project were the contacts and the opportunities for consulting external advisors offered by Future Technologies.

Among other participants was the Moscow startup GetFaster, which develops solutions for food retail chains and manufacturers.

As told by the representative of the company Anton Zakharov, the company has been developing the project for two years already. Initially, the founders conceptualized it as a food delivery service, but later decided to make a shift to the b2b segment. As of now, GetFaster is aimed at food manufacturers and retailers.

“We’re working on solutions for food retail and manufacturing. Our current activities are focused on the provision of comprehensive outsourcing of tasks associated with the launch of online sales, which can include both processing of orders and the creation of ready-made solutions if a retailer wants to build an online sales system from scratch,” says Anton Zakharov.

Yet another participant of the session, the startup Arni, aims to develop a software product that will help companies communicate with their clients in natural language. Arni.io is an autonomous sales assistant and tech support specialist powered by AI. Last year, the project became one of the 30 projects selected to participate in the first enrolment of the joint accelerator by Sberbank and 500 Startups.

Following the results of the pitch session, Arni, Funbo and GetFaster were the three winning projects chosen by the judges. The top-7 included the startup Tensy, which developed a decentralized P2P educational platform, as well as Laeneco, Inssmart (a service for insurance agents), and Mind&Machine (a project offering solutions for the optimization of corporate management in retail enterprises).

Dmitry Ermakov, investor and co-founder of the company Oodji, gave a very high appraisal of the potential of projects pitched at the session.

“In the last year, I’ve taken part in some 15-20 pitch sessions in St. Petersburg, and this session was without any doubt the most interesting one with regard to the quality of the projects presented,” commented the expert. “As each member of the iHarvest Angels club makes their own decisions, we can work with any of the participating startups regardless of the final ranking.”

Dmitry Ermakov also gave some advice to the entrepreneurs gearing up to present their first project to investors.

Firstly, a startupper has to have a unique vision. In as little as four to five minutes, they have to convince an investor that they and their projects are worth working with. To achieve this, an entrepreneur should have a vision of how they’ll develop their project, as well as a solid program of specific steps they aim to take to make their project a reality.

Secondly, a startupper has to have an ability to sell. They have to present their project in such a way that even people who don’t have an in-depth understanding of the field or technology in question would want to learn more.

Lastly, a startuppers has to have an appropriate set of skills. Investors need to understand that their future partners have a certain record of working in the target industry and know its specifics and problems. What’s more, notes the expert, it’s important that a startupper has a sum of money to invest in the project in order to carry it through the first stages of its development.

According to Andrey Myaskov, it’s absolutely crucial that such sessions are organized on a regular basis. That’s why the organizers are considering the option of holding future events of this format in collaboration with the iHarvest Angels club. Apart from that, the Future Technologies accelerator regularly hosts workshops during which experts in different fields discuss the aspects necessary for making startups a success.

An updated event schedule of the Future Technologies accelerator is available on their official website.