Resident startups of ITMO’s Future Technologies acceleration program have presented their projects at a pitch session for investors, mentors, members of the press and special guests at the event FT Startup Drive. This is a new format of presentation in which the top priority is placed on the quality of the jury and the expert pool as opposed to the number of guests. Participants had the chance to get personal advice from members of the jury and the mentors. 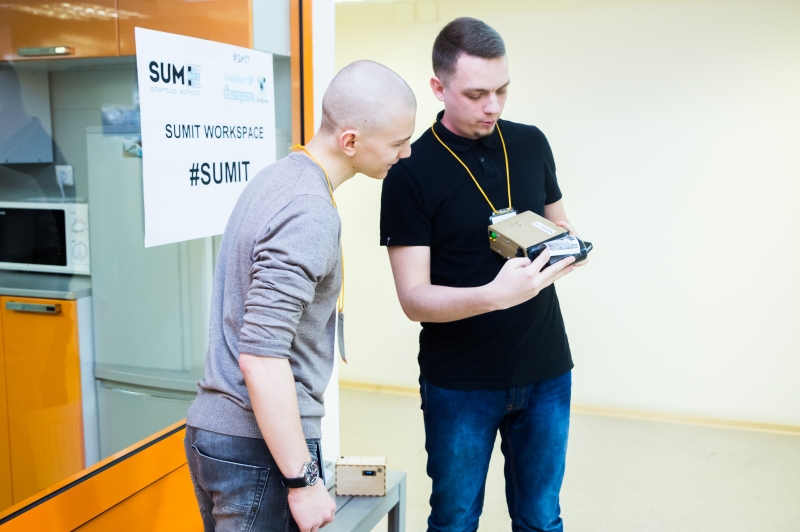 This service can be used by educational institutions to track their students’ attendance rates, inform parents of missed classes and notify students about schedule changes  or special events. Administrative workers can keep track of everything online and use the service to compile reports. The developers have already conducted a survey and found out that 70% of institutions recognize the need to introduce such tools in their work, while 25% are interested in buying copies before the end of 2018. While a participant in the program, the startup has already managed to begin working with 12 clients, with 4 more contracts expected to be finalized by August 2018.

This project aims to detect and predict the development of near-sightedness, or myopia, using neural networks. Ophthalmologists can input patients’ data to have the program calculate how myopia will develop in each patient. The neural network was trained with a massive amount of data gathered from patients with myopia. By identifying patterns in new cases, the system will suggest diagnoses and future defect growth.

Why is this important? First of all, it’s estimated that 2.5 billion people around the world today suffer from near-sightedness. By the time the planet’s population reaches 10 billion, half of all people will be afflicted. Progressive myopia may result in blindness, which is why it’s crucial to understand the progress rate and develop the correct treatment procedure. Besides, such a service would shorten the time a visit to the eye doctor would take, making lines shorter and the clinics’ profits higher. According to the developers’ data, 70% of medical specialists would like to use the service, while 60% of their employers would support the introduction of the new tool. The startup has already made preliminary arrangements with two medical clinics, and its team includes a qualified ophthalmologist.

This dating app allows users to invite each other to spots of their choice . All users would describe their favorite spots upon sign-up. The developers plan to receive service fees from the owners of the venues where couples end up going. According to the project’s team, what makes their project better than other similar projects is that its target audience would exclude “shady” crowd. After all, to gain access to the app, users need to upload a real photo and receive at least 60% “likes” from other users.

Rehabot is a mechanical training glove used to recover fine motor skills after strokes, brain trauma or aneurysms. The issue with clinical rehabilitation is that even though patients are taught to walk and move, less attention is brought to the restoration of their fine motor skills. This forces patients to spend more time on additional sessions with physical therapists and other methods, extending the time they need to come back to their regular way of life.

Rehabot is worn on the wrist and used for various exercises, tuned using a computer software package. The training techniques are based on mechanotherapy; the device can even perform passive exercise, which is useful for patients with paralyzed limbs. Rehabot can be used at home or in hospitals; medical specialists can monitor the device remotely. The startup’s team has received several pre-orders and will conduct tests in cooperation with medical centers. The developers plan to patent the device soon and begin sales.

The application is used for automated analysis of road incidents and filling out European Accident Statement forms used by insurance companies to combat fraud and identify faulty parties. Drivers can document their incidents, upload photographs and a description into the system and the program will attempt to identify the cause and the guilty party.

Accident Solver will be of special interest to insurance companies, who can use its findings to identify fraud. By some estimates, nearly 30% of insurance payouts are received by those who fake road incidents.

Some of the projects that ITMO.NEWS has written about previously were also present, such as Pallium – a decentralized platform that uses blockchain technology to let AI developers operate, store and train their AI models using the computational hardware provided by other members of the network.  Such a platform is needed as investments into the field of AI grow by 10% annually, but development is still very costly.

Horum is another startup we’ve written about before. Its developers are creating a system in which users can create educational VR videos. Companies can use the service to train their employees; students can use it to learn how to use a certain type of equipment. Essentially, whenever someone has to learn a new tool, they can do it in virtual reality without stunting production or taking away time from their coworkers.

You can read more about Funbo, who also presented their project to investors, in our article. The project aims to let gamers pay to play games with seasoned cyberathletes.

Moment is a photo camera that can make instant snapshots using receipt tape. One of its advantages is the extremely low cost of each picture; the camera can also boast built-in filters. Users can even use the device to make notes: speaking into the camera’s microphone will make the text appear on a printout.