“We Got Noticed by Intel and IBM”: How an ITMO Technopark Resident is Winning Over the American Robotics Market

Founded by ITMO University and Boston University College of Engineering professors, The MerkleBot company has headquarters in Silicon Valley and a developer office in St. Petersburg. Recently, the startup was awarded in the Robotics category at DeveloperWeek, the world’s biggest developer conference. After that, it was noticed by major companies. Vitaly Bulatov, CEO at MerkleBot, gave a lecture on business management in the USA at ITMO University during his short visit to Russia, and ITMO.NEWS took the opportunity to ask Vitaly several questions about the startup. 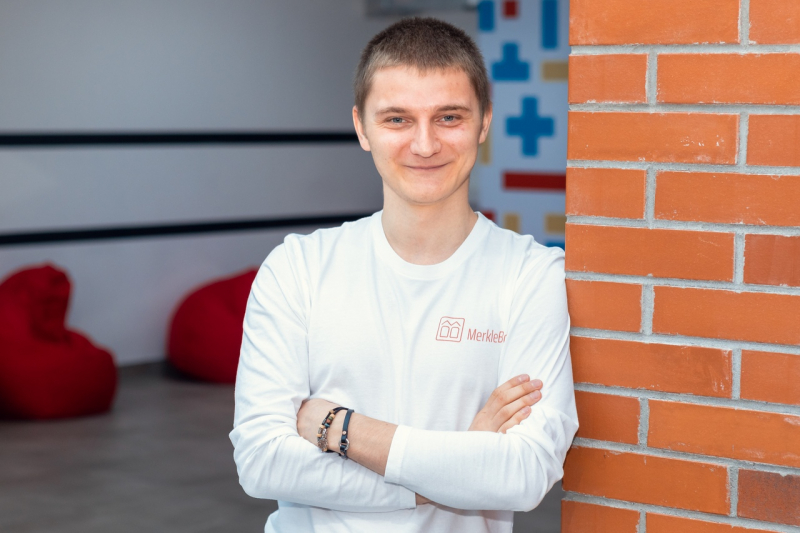 MerkleBot is a platform for the automation of financial operations in the field of robotics powered by the blockchain technology. The user is “hiring” a robot and pays for the amount of operations, and the transaction is performed automatically.

Basically it’s a brand-new business model: robot as a service. Robotization of the processes can be difficult to implement at small and medium businesses: the robots are too expensive and technologically complex. MerkleBot helps such companies automate some of the processes without additional problems: the clients don’t have to waste money on fully re-equipping their operations before they start to gain profit from the automation. They only pay for the amount of operations that the robot performs: just like they would pay an employee.

I first met Sergei Lonshakov (developer, blockchain architecture specialist, and one of the founders of MerkleBot. – Ed.) when he was giving a lecture at one of the first blockchain conferences in San Francisco. I didn’t really understand much of his presentation, but what I definitely noted is that the blockchain technology has a huge potential for implementation on the market.

Sergei Lonshakov and Aleksandr Kapitonov had a research project in robot economics. Their idea was that robots had already been implemented in various industries, but there still wasn’t any tool for value transferring between different autonomous robots or between a robot and a person. It’s unclear how to perform transactions, how contacts are supposed to work, and how to automate its economics: that’s what they were working on.

Sergei offered me to participate in the commercialization of their research. At the time I was just looking for a technological product to work with. I was working at J’son & Partners consulting: we were making financial models and products for telecom companies. So, I wasn’t creating anything myself, I was working on strategies and business plans for other companies. I wanted to get experience in business management. That’s why I joined Sergei’s team, and then met Aleksandr Kapitonov.

We began to cooperate with Babak Kia (development director, Boston University professor, Internet of Things specialist. – Ed.) after he had helped us organize a meet-up in Boston. He was interested in what we’re doing, and connected us with Boston companies. Boston is a robotics hub, lots of robotics companies, scientific and nearly-scientific projects are located there.

Initially we were creating an open source project as a research company. We had several projects in drone traffic management and ecological monitoring.

After Babak had joined us, we decided to re-launch the company with a new product idea and a new team. That's how the MerkleBot was born.

We only create software for robots: we don’t produce the robots themselves. Like most of the investors and mentors say, “Hardware is hard”. Everything related to hardware is difficult to scale up and produce. That’s why we wanted to avoid that. We understood that our team’s general specialization was communication protocols, so we focused on making a platform that would help the companies organize the robots as one infrastructure, even if the robots are of different manufacturers.

Before we attracted our first investors, we had to work out of pure enthusiasm for half a year, while preparing the technology. The concept of economically autonomous robots meant that we had to use blockchain technology, so we got immersed into that. We were involved in cryptocurrency early on. When this market boomed, it helped us a lot: we were able to fund our project for a long time. It was partly a mistake, because due to that we got immersed into the technology again, and continued to do research projects just because it was interesting for us. We had some clients, but not the ones that would allow us to scale up. I guess one should find a fine line between “I have nothing to eat” and “I can do anything (so I end up not doing the right thing)”.

We used to present ourselves the wrong way for a long time. We were telling people how we were building robot economics, and how the robots would be making contracts with people, but it was too vague. Instead of this, we should’ve told them how we’d built a platform that would allow the robots to perform operations and receive payments from the transactions. Robot as a service is a new business model that has never been presented on the market before.

Our first case was a pilot project related to drones. It was a long-time research project. We created a technology that would allow one to summon the drone by pressing a button that would make it go to a certain location and film it.

We presented it to a big paintball venue. They started to bombard us with their suggestions and requirements. We had to develop a lot of things, both hard- and software, even though the market is not that big.

So, we began to grow, and started to work on drone traffic management. The same technology was used for autonomous vehicle traffic management, and we received a grant for this research. At some point, we realized that we were dealing with technology research, even though the market wasn’t quite established yet. So, we started to look for a nische that already existed. That’s how we entered the field of industrial robotics. It’s already there, and the technology stack is basically the same. We were creating a communication protocol for the machines, and provided safe value storage and transfer: just like a client would pay the drone for the filming, the company pays the robot for the operation. Technologically speaking it’s one and the same, but the market is very different.

We aim for the international market, not only the American one. Our headquarters are located in Silicon Valley, so we’re in the midst of technological development. Directors and deputy directors of the companies from all around the globe come there to check out some innovative products. There, you can arrange meetings with representatives of the companies from any country. We can suggest our product for those who are looking for the specific solutions to robotics automatization. So, we are not limited geography-wise.

Out of our team I alone am based in San Francisco. The main part of my job is sales, and visiting conferences and meetings. In St. Petersburg, we have an office for the developers: we have six full-time employees. In four years, we have worked with about 20 people, and they still cooperate with us sometimes when we have a project that requires a very specific specialist.

Developer Week is the biggest developer conference in the world. The fact that we were awarded as a best innovation in robotics this year means that we offer a service that is really in demand among the people of the industry. We got noticed by the representatives of major companies like Intel and IBM, and had a chance to talk with them.

Of course, neither Intel nor IBM are our direct customers, but their interest is just what any startup needs. Every startup is eventually headed to the exit: to selling your share of the company. There are two options: IPO (initial public offering) and selling to a major company.

Our vision is to create a fully autonomous robot economics. We want the robots to be able to get organized into multilevel supply chains, so that, for example, a fully autonomous facility could produce something, then book a delivery through another service robot, then pay automatically and so on.

Our short-term goal is to take up a significant share of the robotics market. We want to help the companies implement and manage robotics, we want to become a “driver” for this market.