ITMO’s freshmen’s team won the first place at Robotex-2017 competition, which has recently become the largest robotics competition in Europe. The competition included 24 categories. ITMO’s team won in the category DJI Drone Race, getting ahead of the Tallinn University of Technology. ITMO.NEWS shares about the new team of winners: who these freshmen students are and what they do. 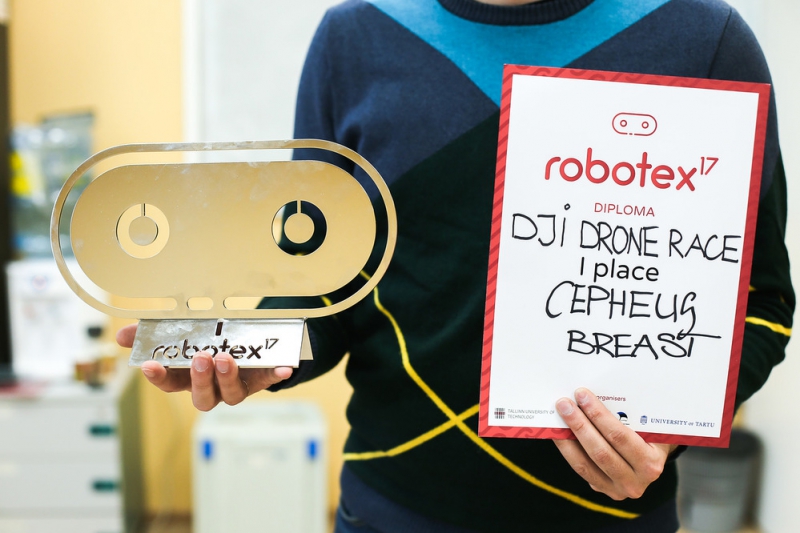 Robotex Festival, organized by the Tallinn University of Technology and the University of Tartu, has been actively developing over the past few years. This year, it has become the largest robotics event in Europe. More than 15,000 spectators attended Robotex-2017. The festival featured various events for all robotics enthusiasts: children, students and even their grandparents who came to cheer for them.

ITMO’s team included freshmen from the Department of Control Systems and Informatics, Valery Chernov, Artem Egorov and Alexander Semenov, as well as Egor Zhdan who is a student at the Computer Technology Department . "All ITMO team members are winners of various academic competitions and hold a number of awards. We invited these guys to study on an individual educational program at ITMO. They are a test group that is going to be trained according to the latest trends in education, as ITMO’s administration has announced previously. In spring and summer, we consulted with the team and found out: what special interests they had, what their requests were, what conditions should be provided especially for them, what should be included in their educational program, and what - on the contrary - should be removed from it. Ultimately, we could agree and form a team of four people for whom we prepared an individual educational program which includes various project activities," - explains Alexander Kapitonov, assistant at the Department of Control Systems and Informatics.

According to Alexander Kapitonov, project activity is one of the educational priorities for the team; and participation in the DJI Drone Race Robotex 2017 became a stage of educational process which students organized themselves to a great extent. The guys independently chose competition, category and started preparing immediately after enrolling in the university, in September. Unmanned aerial robots competed in the DJI Drone Race category. They had to overcome obstacles and be faster than the other contestants. The students chose Parrot AR. Drone 2.0 to compete in this category. ITMO’s Department of Control Systems and Informatics provided the team with this drone. Team members developed special software for this drone and equipped it with an additional number of functions, for example, technical vision. They also came up with a regulator which allowed the drone to hold proper position and orientation in space. In addition to that, the students developed a special algorithm on the basis of this regulator, allowing the drone to move along the desired trajectory, while changing its orientation according to the law which students formulated themselves.

"We distribute roles and responsibilities in our team accordingly. Valery Chernov who is our team-lead is also responsible for developing low-level code: that is, for configuring microcontrollers and writing libraries, making work with them easier. We have an engineer, a mathematician and a programmer on our team as well. We are currently working on projects which are not related to this competition also. Other team members help the programmer solve problems that arise while we work together. During our training for Robotex, one of the three drones completely failed, for example; and we had to repair the others. We also faced production defects quite often and had to replace certain elements, which required certain engineering skills," - explains Artem Egorov, one of the team members. One of the most important rules of participation in the mentioned category states that the robot should be autonomous and the operator should be able to turn it off at any given time. The drone competition looks very much like Formula 1 races: each drone should fly a maximum number of circles in the shortest time.

"Our drone is connected to a computer and works via Wi-Fi. Particularly, its take-off and landing are carried out by a command from a computer, as it should be done, according to the competition rules. Everything was fine with the network at the beginning of the competition. However, as the audience filled the room the Wi-Fi network and air got filled with other signals - and communication with the drone became unstable. So, we ventured out to one of Tallinn’s shopping centers, bought a Wi-Fi signal amplifier and returned to the competition grounds. This allowed our drone to respond to our commands faster. The organizers gave the teams five minutes to set up their drones. After that all of the participants had to leave the grounds, leaving only their robots behind. All of the drones had to operate automatically. One person from the team was allowed into the competition grounds if the drone needed a reboot", - explains Valery Chernov. Robotex-2017 was the first competition for the new team which took place only a few months after the students’ admission to ITMO - and the guys won it. The students are currently considering other competitions involving drones, where they could apply their skills and experience and win new awards.

A quick reminder: RobotChallenge used to be Europe’s largest robotics competition by the number of participants, visitors and categories - until last year, when Chinese representatives bought out the rights for it. From now on this competition will be held in China. This year's RobotChallenge was held in Shanghai.