December 3 marked the final round of Robotex, the largest robotics competition in Europe. Last year, ITMO University team Cepheus took first place, while this time our students placed second and third, losing to students from Germany. In this interview with ITMO.NEWS, they share about what challenges they faced during the competition. 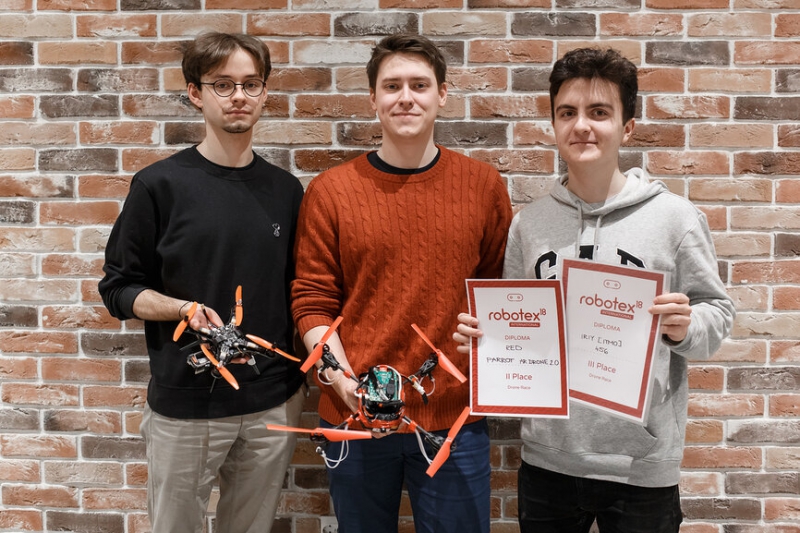 Organized by Tallinn University of Technology and the University of Tartu, the Robotex festival has recently become one of the biggest European competitions in the field of robotics. Every year, the event brings together some 35,000 visitors, 4,000 engineers, and representatives of more than a hundred technological companies.

However, the new robot made the team have a tough time, as its navigation system suddenly malfunctioned. The students didn’t manage to fix it entirely, which resulted in them lagging behind.

The second drone didn’t function perfectly either. After completing four circles out of ten, it collapsed and fell. What’s more, its nose started to come off. The students approached the situation creatively: they cut the part off and attached it back to the body using red tape. Thanks to this, their device evoked associations with the team’s name RED.

“Despite the difficulties, we never get angry at our robots. Instead, we treat them like Soviet drivers treated their Kopeykas, tenderly calling their cars “Swallow”. It sounds a bit weird, but that’s how things work here. If you treat your robot like a pile of metal, it will soon become one,” shares Artemiy Zenkin from the RED team.

The team’s hopes for victory disappeared when they saw the performance of the TU Ilmenau team.

“They didn’t participate last year, and we were really taken aback by their performance. They first came out with two drones: one in their hands, and another one on a fishing pole, which made us giggle. But then their robot made ten perfect circles and our jaws dropped,” recalls Valeriy Chernov.

According to the students, the drone’s control algorithm developed by RED’s team member Konstantin Pachkovskiy is much more flexible than the one made by the competition winners. But the German students had prepared a detailed mini-map of the place and controlled their flight using the given coordinates.

“The system should be as rough as possible so that it doesn’t depend on the lighting conditions and other factors,” explains Valeriy Chernov. “But what all these competitions are really about is experience. You come to an unknown place and quickly adapt to new conditions and tune your system accordingly. This is a very valuable skill, which may come in handy in your future career. I think that we did pretty well.”

ITMO students note that they give credit to the German team. The winners also complimented ITMO participants on their work and invited them to take part in a robotics competition that will be held at TU Ilmenau on May 10.