The All-Russian Olympiad in Robotics has recently ended at the Innopolis University in Tatarstan. ITMO University's School Team in Robotics got 1st place in the senior group of the Open category, having developed the Strawberry Fields project on creating a smart garden bed that makes use of Soft Robotics technologies; members of the junior group presented the AppleBot - a robot for picking apples - and won silver medals. The competition brought together 600 aspiring robotics specialists from 60 regions of Russia who competed for the opportunity to become part of the Russian team at WRO 2018. 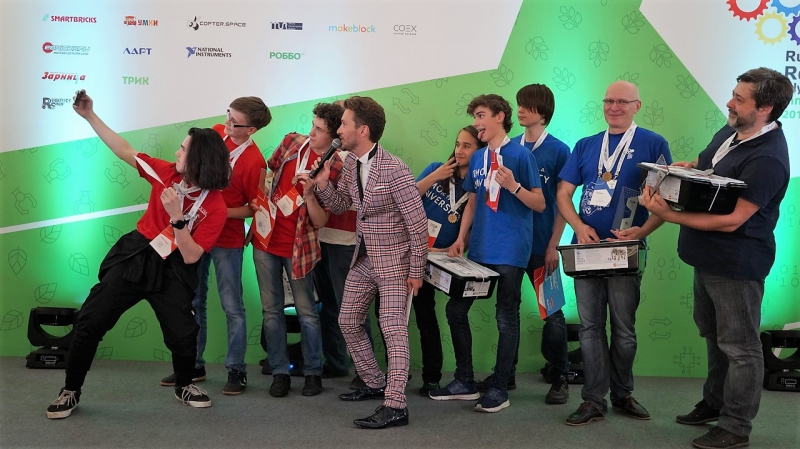 The All-Russian Olympiad in Robotics is the final stage of a nationwide contest in the programming of robotic systems. The event acts as a platform for conducting both competitions based on national categories and standards and those following the rules of WRO (World Robot Olympiad). This year, it has been the fifth time that the competitions took place in the city of Innopolis in Tatarstan.

ITMO’s school teams supervised by coaches Igor Lositskiy and Evgeny Zavarin (the project is conducted in collaboration with Lyceum №239) participated in the Open category of the competition.

Traditionally, the tasks and topic of the World Robot Olympiad are proposed by the country that hosts the international finals. The topic of WRO 2018 is “Food Matters”; according to the rules, the participants' projects have to comply with at least one of the aspects of the 2nd Sustainable Development Goal: promote sustainable agriculture, improve the quality of nutrition, provide for food security and contribute to ending hunger.

In order to make the best of their ideas, the students had to apply the skills they've been training during the regional stages: construction, project development, and presentation skills, as well as show great teamwork. All of these competencies allowed the Russian national team to show great results in 2017's WRO in Costa Rica, where ITMO's School Team got gold in the Open category’s Senior age group.

Members of ITMO’s junior team, Alexey Kudryashov from Lyceum №533 and Dmitry Gotodovoy from Lyceum №366 developed the AppleBot – a robot that can pick apples and bring them to a sorter, and got 2nd place. The senior team, represented by Vasiliy Dunaev and Dmitry Kharlapenko from Lyceum № 239 and Aleksandr Tulpanov from the Laboratory of Continuous Mathematical Education presented the Strawberry Fields project that won the gold medal. Strawberry Fields is a smart garden bed that grows strawberries. A robot uses a camera to detect strawberries and map them. By using a special application, any person can choose particular berries and give the robot the order to gather them.

"The project's main gimmick is using a Soft Robotics technology of soft gripping. In order to complete this project, we've turned for help to specialists of ITMO's Chemico-Biological Cluster, who provided us with all necessary materials and helped us with Soft Robotics elements, so that our robot could work with fragile objects," comments Igor Losistkiy.

We'd like to note that the Russian WRO division amounts to more than 12,000 participants in 4,000 teams, yet only the best of them - winners of regional qualification stages - can participate in the All-Russian Robotics Olympiad and aspire to join the national team. This year, the final stage brought together 600 participants from 60 regions.

The participants of WRO’s national finals competed in four categories: Regular, Open, Advanced and Robot Football. What is more, the competition’s guests could attend workshops where they could learn to construct robots for different purposes, as well as lectures of WRO’s technical partners and members of laboratories and the Robotics Development Center of Innopolis University.

Based on the results of the All-Russian Olympiad in Robotics that acts as national finals for WRO, Innopolis University will form and train the Russian national team that will take part in the World Robot Olympiad 2018 that will take place in Thailand from November 16 to 18.