Research associate at ITMO’s Laboratory of Femtosecond Optics and Femtotechnologies Semyon Smirnov has received an award of the Science Photo Competition hosted by Wikipedia. Performing an experiment, the scientist managed to get a snap of a femtosecond laser spark and the cone-like supercontinuum it created. This kind of radiation has a wide range of applications in many scientific fields, from the study of the properties of new materials and biologic tissues to the optimization of data transfer systems. The researcher shared about finding beauty in research and using photography to popularize science with ITMO.NEWS. 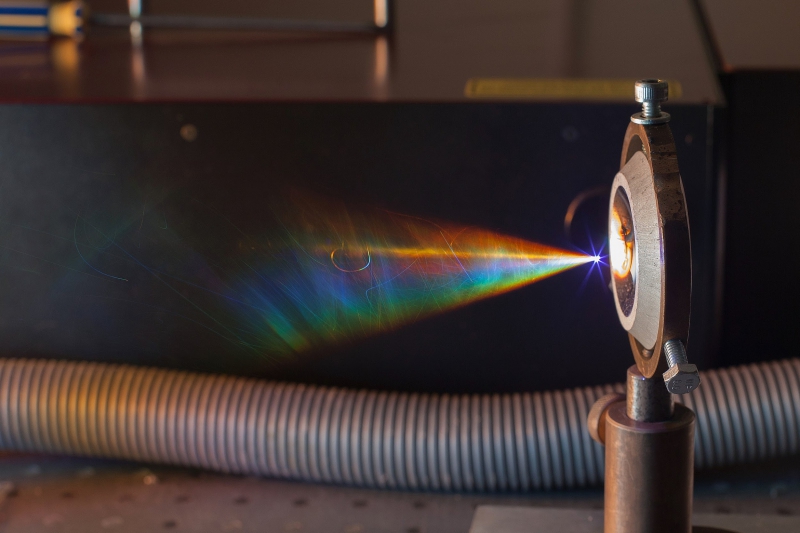 Femtosecond laser spark and the cone-like supercontinuum it creates. Photo by Semyon Smirnov

Organized by Wikimedia RU together with the scientific TV channel Nauka, Science Photo Competition is a scientific photography and illustration contest which was taking place from July 15 to October 2, 2018. Its main goal was to promote science and discover high-quality, modern photographs and other media to illustrate science-related Wikipedia articles with.

In 2018, the competition was hosted in the following five nominations:

According to the rules of the competition, there were three winners crowned in each nomination. Unveiled in October, the results included a familiar face from ITMO University: Semyon Smirnov, a researcher at the Laboratory of Femtosecond Optics and Femtotechnologies, was awarded an honorary second place in the General Category nomination.

Capturing supercontinuum: how to make a photograph translate the beauty of science

Semyon Smirnov’s scientific interests lie in the field of terahertz radiation, its generation and application in different fields. His cutting-edge research on polarization characteristics of terahertz radiation generated by dichromatic femtosecond filament formed the foundation of his PhD thesis, which the young scientist defended in 2017. Semyon notes that the findings he obtained allow for a deeper understanding of physical processes in new phenomena which occur from using giant-pulse lasers, and paves the way for applying these radiation sources to the development of new concepts of data transmission.

The photograph that has won Semyon the second place in the Wikipedia competition (which is also the main picture of this article) depicts a femtosecond laser spark and the cone-like supercontinuum it created. It was taken during an experiment on the generation of supercontinuum (a coherent source of white light in the visible to near-infrared bands) in 2014, conducted by the researcher as part of his work on his thesis. The experiment used a special optical scheme with a unique femtosecond laser system based on titanium-sapphire crystals.

“I had to identify a certain part of the supercontinuum spectrum which was formed by the femtosecond laser spark, and evaluate the effectiveness of how this part was being generated,” says the scientist. “The creation of a supercontinuum by a femtosecond laser spark is a fascinating spectacle, so as soon as I witnessed it, I decided to capture it on film. Assisted by my colleagues, I shot the process in a 15-second exposure setting. This time was needed for us to highlight the laser spark area with smoke which made the cone-shaped supercontinuum visible. We generated the smoke by placing a sheet of paper into the spark area for a couple of seconds.”

This radiation is used in a wide range of scientific research areas. One example is the study of properties of new materials and biologic tissues: unlike X-rays, terahertz radiation doesn’t cause a harmful ionization of tissues and is therefore considered the safest contact-free method for tissue imaging, explains Semyon Smirnov. Although some devices capable of working in the terahertz frequency band have already entered the market, their effectiveness is still not enough for them to be used on an industrial scale, and this is what makes the quest for new radiation sources so important, believes the researcher.

Among other potential applications of terahertz radiation is the concept of new-generation wireless systems, envisaged to transmit information much faster than the technology we have today. Such research is also carried out by ITMO’s International Institute of Photonics and Optical Information Technologies, which the laboratory Semyon Smirnov works in belongs to.

Four years on from this memorable experiment, Semyon happened upon an ad of Wikipedia’s Science Photo Competition in the newsletter of ITMO’s corporate intranet system ISU, but didn’t make much of it until his colleagues convinced him to try his shot. The scientist has been a keen photographer for more than ten years; much of his work depicts his home Laboratory of Femtosecond Optics and Femtotechnologies.

“My first scientific photographs were taken about six years ago, when I was asked to contribute to the laboratory’s promotional leaflets. My aim was back then, as it is now, to make people interested in our work. I think that a captivating photo is a great way to attract people’s attention, and to motivate them to look into the essence of the process captured, themselves. My current focus is on fundamental research in the field of the generation of terahertz radiation. But I do plan on continuing with my scientific photography hobby. For physics isn’t only a very interesting science, but also a very beautiful one,” shares Semyon Smirnov.