At the end of September, a team of ITMO University students took the grand prix of one of the largest hackathons in Russia. Today, they are working on an app for a major sports media outlet. ITMO.NEWS met the members to find out how a neural network can help you become a football ace and why they’re not hurrying to accept job offers from leading tech companies. 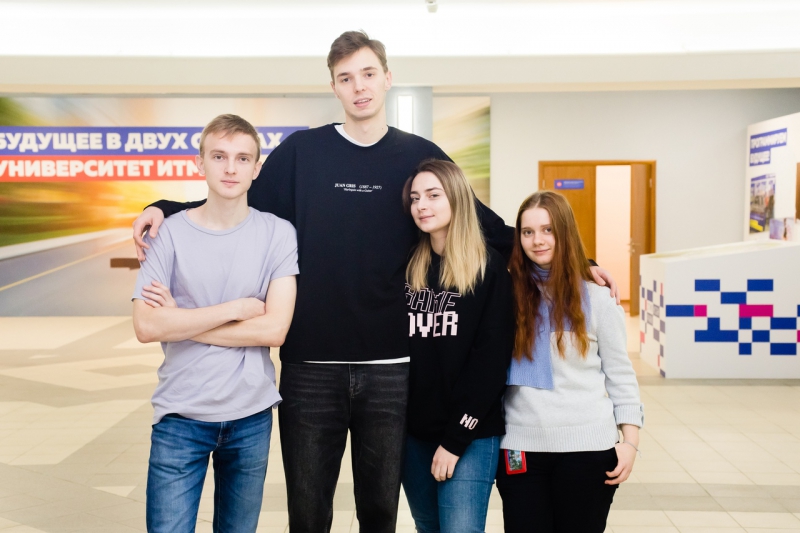 The team GarlicBread, which represented ITMO at VK Hackathon 2019, doesn’t have a long record, big experience of participating in hackathons, or an impressive list of diplomas and awards. VK Hackathon was the first one for three of four GarlicBread members. Nevertheless, all this didn’t prevent them from winning the competition’s grand prix, coupled with 500,000 rubles and countless job offers.

Securing their victory was a project of an app that would allow users to watch footage of shots on goal made by famous footballers, record their own attempts and compare how closely they’ve managed to copy a sports star’s shooting technique. The app left such an impression on a VK Hackathon’s partner, sports media outlet Sports.Ru, that now the team are in discussions on developing their project further and building it into Sports.Ru accounts on social media.

The hackathon’s participants had 48 hours to come up with and implement a maximally detailed model of an app aimed at solving the tasks submitted by the event’s partners, which belonged to one of eight fields, including media, charity work, culture, sports, travel and so on. The team GarlicBread have decided to try their hand at media and proposed their solution for the promotion of Stories recorded by the social media users subscribed to Sports.Ru.

“As a result, we envisaged and created a service that allows to check for how closely you can copy the style of your football icon,” says one of the team members, third-year ITMO student Igor Anokhin. “How this works is you choose your reference video, record a similar video from a similar angle and upload it to the system. The software is operated by two neural networks: the first measures your body’s position based on 12 points, calculates the vectors of your movement and compares how you and the footballer move. The second neural network calculates the ball’s flight trajectory and compares it to the one in the reference video.”

“After that, the system makes other comparative calculations and produces a percentage-measured result of how close your shot was to that in the reference video. This result is then displayed in your Stories on the social media VK, and you can share it with your friends,” adds another team member, ITMO student Alina Nikolaenkova.

To complete their development, the team members not only had to master a new platform VK Mini Apps, but also assemble a big enough database so that the neural networks at the heart of the project would be able to learn to identify a person in a video and build a virtual model of their skeleton, as well as identify a ball in the footage and build its flight trajectory.

“In the course of the hackathon, we had to physically go and shoot a couple of goal attempts ourselves,” shares team member, ITMO Master’s student Vladimir Razuminin. “While we were driving to the pitch, we were afraid that the sample data would be too scarce, that it would be just us and our camera person on the pitch. But a lot of people wanted to help and came, so at the end what we were afraid of wasn’t not finding enough people but finding enough time so we could record everyone.”

As a result, the would-be winners presented their project presentation exactly three minutes before the hackathon ended. But it still currently stands as a rather rough prototype aimed at demonstrating the core idea and its potential implementation. GarlicBread may have claimed the competition’s victory, but their work has just begun.

Eyes on a (new) prize

In the near future, the team members will engage in discussions with the leadership of Sports.Ru thrashing out the question of further applications for the team’s idea. Thus, their concept hasn’t just stayed at the tournament case phase but could soon help football fans hone their game skills.

“Even now, working to expand our app’s functionality, we’ve come to the conclusion that it can be of benefit in three main directions,” adds Vladimir Razuminin. “To the Sports.Ru audience, it could be an opportunity to compete in different challenges, which is very popular now, on YouTube for example. To football buffs, it could be a great way to hone their skills. For instance, if you wanted to practice a special kind of kick, you could watch an educational video, record your own and see where you go wrong. The third application is sports schools. Coaches can monitor the training sessions’ dynamics in numbers, improving their analytical potential and advancing the digitalization of the whole training and learning process.”

The participants also plan on vying for the second main prize of VK Hackathon, which is soon to be played out between the winners and prize-winners of the September tournament. It will be awarded to the team whose project will show the best growth dynamics after the end of the hackathon.

“In half a year, we want to compete for another prize of 500,000 rubles, which will be awarded to the two teams whose projects will demonstrate the best dynamics, the biggest number of downloads and will attract more followers,” explains Vladimir Razuminin. “Sounds exciting, so we decided to give it a go. We’ve got a road map featuring our main tasks: to develop our product and form a content plan from the marketing point of view. Now, after the hackathon, we can expand the system’s functionality, as well as work on its business model and design.”

Apart from that, the team members have other projects as well. For example, Igor Anokhin and Vladimir Razuminin have already developed several apps, one of which will be presented in the following weeks.

“Our app is very useful for organizing events,” explains Igor Anokhin. “Usually, the first thing you do when attending a new event is looking for information about where to go and what to do, so you check out the event’s website, try to get a map of the place you’re in, write to the organizers. Our Visitor-Online application can solve this problem. We have already had two test drives, and soon there will be an official release.”

This is why the students do not accept numerous job offers from the hackathon’s partners that they started receiving after the victory.

“Immediately after the hackathon, we all received job offers for different positions,” shares Vladimir Razumin. “But we decided to focus on our idea instead. We see huge potential in what we do and want to do everything in our power to make our dream come true. We didn’t say no, but what we now want is to focus on our own project.”

VK Hackathon 2019 took place in the Manege Exhibition Hall at the end of September. This year, among the hackathon’s partners are Mastercard, Aviasales, Sports.ru, TASS, Cosmopolitan, the Alexander Pushkin Museum, and the Polytechnic Museum.

Some 600 students applied for participation in the hackathon. The prize fund amounted to 2 million rubles.