Professor Oleg Stepanov from ITMO University’s Faculty of Control Systems and Robotics was elected a corresponding member of the Russian Academy of Sciences (RAS). He is actively involved in research of optimal methods for processing measurement data and its application in navigation systems design. The scientist does not only conduct research and give lectures to university students but also heads the research and educational center of Elektropribor, a leading Russian institute in the field of high-precision navigation, gyroscopy and gravimetry. In this interview with ITMO.NEWS, Oleg Stepanov shares his thoughts about the opportunities that the Academy’s membership opens up, the use of AI solutions in navigation systems, as well as gives advice to those just starting their career in this field. 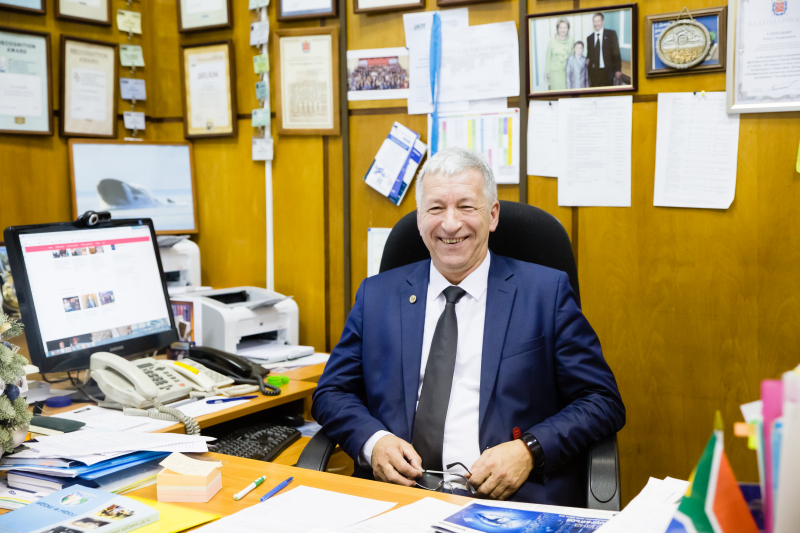 First of all, congratulations on becoming a member of the RAS. Not everybody is familiar with the election procedure though. How was it organized this year?

Thank you. As for the election procedure, to be eligible for participation in the election, one has to comply with a range of conditions. First, one has to have extensive research experience and be recognized within the research community. Second, one needs to be nominated by another Academy member or the Academic Councils of research organizations. I was nominated by Vladimir Peshekhonov, a RAS member and CEO of Elektropribor.

In order to participate, one also has to submit a set of documents, which includes their consent to be nominated, a CV, as well as an information statement about the candidate and the conclusion of the academic council with a brief description of the candidate’s scientific achievements. All these documents are submitted to the Academy.

Participating in the election are all the participants of the meeting. To win, you need to get at least two-thirds of the votes of all those present and at least 50% of the total number of members of the department.

What opportunities does the new status open up for your work?

In general, I see two areas where my expertise can be useful and where my new status will allow me to work even more efficiently. First of all, since the ‘90s, I have been organizing a conference for young scientists held with the support of ITMO University. Over the years, the conference has evolved into a major international event and has given rise to a workshop that we now plan to organize in several Russian cities. I hope that thanks to my new status and the opportunity to communicate directly with the Academy members I will be able to do my work achieve even more in my work, and the conference will gain new opportunities for development.

Secondly, there is an international organization called the Academy for Navigation and Motion Control which has in its ranks leading international and Russian researchers working in the field of control systems and navigation. Some of them are RAS members as well. I think that such a collaboration between the RAS and the Academy is beneficial for both organizations. Being a vice-president of the latter, I plan to use my experience and connections to further develop such collaboration initiatives.

Please tell us more about your research. Your recent papers, published in international science journals, revolve around satellite navigation. What are the most important topics that are currently being explored in this field? And what results have you managed to achieve in this field lately?

By and large, my specialization focuses on the processing of measurement data in relation to information and navigation systems. In general, the key direction of development for navigation systems today consists of two topics. The first is autonomous systems that are based on inertial sensors (gyroscopes and accelerometers) mounted on a moving object and allowing to solve the tasks without involving any external information. The Elektropribor institute is engaged in the development of such sensors and systems based on their use.

Another direction is satellite systems that can be used to determine an object’s location and orientation using external information – artificially created fields of radio signals emitted by equipment installed on satellites. This is a major achievement in the field of navigation systems. Thanks to that we can now determine our coordinates using almost any smartphone.

The main advantage of autonomous systems is that you don’t need anything else. Everything there is on board allows you to solve problems. But at the same time, potential errors in determining the location can grow in significance. What, in turn, are satellite systems good for? The fact that the error factor doesn’t increase, and you get high accuracy. The progress in satellite systems consists in the fact that now, the accuracy range varies from units of meters to units of centimeters or even less. Of course, professional equipment is more expensive than what we use in smartphones, but the fact remains: today it really is possible to ensure high accuracy of satellite navigation.

But it’s not that simple. The thing is that the information from satellites is not available indoors and in urban canyons, and this is a very significant drawback. Another problem is that satellite systems can be interfered with. Such shortcomings force hardware developers to look for new correction options for autonomous systems that allow you to determine the location without external systems.

That’s why, on the one hand, we’re developing algorithms that ensure effective merging of data from satellites and autonomous sensors. And in this, we have managed to achieve serious results. On the other hand, we’re looking for alternative means of solving the task of autonomous system correction without the drawbacks of satellite systems.

Technical vision systems have recently become very popular. Do you work with these too?

Yes, technical vision systems are among the alternative tools that I just talked about. Today, thanks to the active development of computer technologies, optical devices, and electronic sensors, you can observe an image and compare it with a map. These methods form the basis of vision systems used in navigation.

We’re also working in this direction, though it is slightly different correction systems that we have accomplished the most results in: those that use not artificially created fields (fields created by satellites) but natural ones, in particular, magnetic and gravitational fields. The latter creates the basis for constructing autonomous inertial systems based on the use of the sensors I’ve spoken about: gyroscopes and accelerometers.

Continuing the topic of artificial vision and artificial intelligence (AI), what prospects do you see for the development and application of these methods in navigation systems in the future?

There’s lots of potential for these methods being opened up in the field of the World Ocean research. An entire series of underwater equipment can be developed that would carry out all sorts of survey work, including in the fields I’ve mentioned. I think that also actively developing in the future will be the technology for producing this equipment, its control methods, as well as the technology for solving various navigation tasks. Managing a group of moving objects is a very popular topic now, and, by the way, it’s developing not only in relation to underwater equipment but also the flying one. Apart from that, I also see big potential for the development of artificial vision methods in the field of humanoid robots.

Also actively used right now are neural networks. They have experienced several stages of their development. After a long down-time in recent years, these are gaining popularity again especially thanks to the so-called convolutional neural networks, which turned out to be very efficient in tasks related to image recognition.

How do you manage to juggle working in the industry, research work and teaching career?

Before, here in the Elektropribor company, I worked as a research associate at a specialized department, then I was offered a position of the head of scientific and educational center. Its remit covered solving the questions connected to the training of all staff, from the working personnel to doctors of science. We have our own PhD department, and we collaborate with several universities, first of all with ITMO University, where after a recent reorganization the Institute of Information and Navigation Systems was created and the Motion Control Systems and Navigation Master’s program is being implemented. That’s why working with students also forms a significant part of our activities.

I believe that if you spend at least 30% of your time doing what you really like, you can consider yourself lucky. I am very happy that I can work on research projects that I enjoy and do something really useful helping the youth. Apart from administrative tasks, which may not always be interesting, I have some tasks that make me happy. And when you are pretty much satisfied with your work, it’s not a problem to work a lot, which is exactly what I do.

What advice would you give to young researchers who are only just starting their career and want to become successful in the field of control systems?

The youth don’t have any problem with computers and different software technologies. But sometimes I start to think that if we rely on the software too much we risk forgetting the multiplication table. Is it good or bad? I think that’s not great. The ability to work with computer programs often leads to the actual knowledge being pushed to the side. That’s why I’d recommend to learn theory come what may. Fundamental knowledge will help you to correctly interpret the results you are given by the software and all kinds of equipment.

And one more thing. I believe that it’s very important to love your job. If you manage to find the job you enjoy, it will all work out just fine.