The ITMO Highpark JSC has successfully passed its first public hearings for the conditionally authorized use of a site for the construction of phase-one objects of the new science, education and innovations-focused center ITMO Highpark in St. Petersburg’s Pushkinsky District. This site will be used for the phase-one construction works, housing a study building, dormitories, research centers, and a sports and recreation center with a swimming pool. 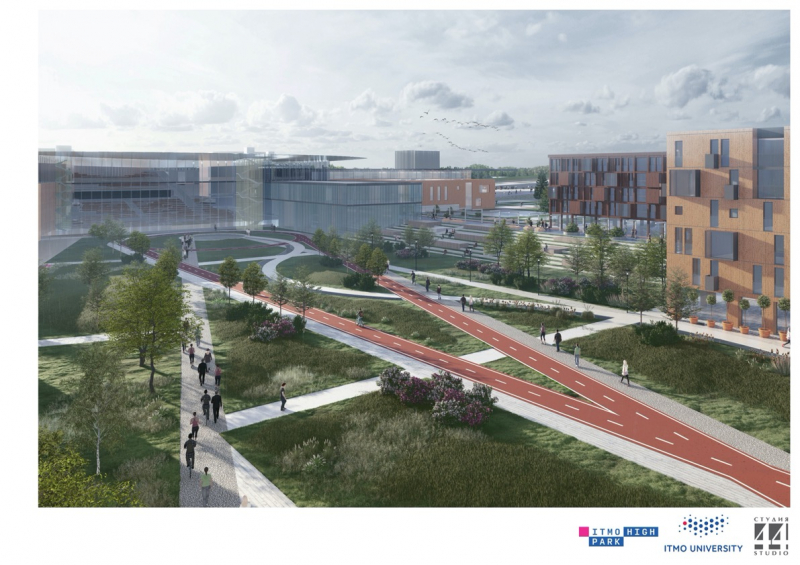 Exhibition of concepts for the ITMO Highpark campus at ITMO University. Photo by Margarita Erukova, ITMO.NEWS

Public hearings have been held in St. Petersburg’s Pushkinsky District on providing a license for the conditionally authorized use of a site for the construction of study buildings and sports facilities of the ITMO Highpark complex. The hearings were initiated by the ITMO Highpark JSC, which owns the rights to the site within the Kievskoe Shosse area on the territory of the satellite city Yuzhny.

Public hearings on the provision of a conditionally authorized use license offer St. Petersburg residents an opportunity to express their opinion and propose their suggestions for the decision-making process regarding a new use of a site. No comments or recommendations have been moved by the participants of the ITMO Highpark hearings.

As noted by representatives of the company, the request for the provision of a conditionally authorized use license was drawn up in the aim of further work on the urban planning documentation in regard to the project, namely for the purposes of approving the territorial development plan for the construction of ITMO Highpark objects.

The previously approved use of this territory was for agricultural activities. The company requested that this be reviewed for the site to be used for the construction of study buildings and sports facilities. Specifically, this area will house the second ITMO University campus: an academic building, a dormitory, research centers, and a sports and recreation center with a swimming pool. The total area of the buildings will amount to approximately 150,000 square meters.

“The implementation of the ITMO Highpark project is proceeding smoothly and according to plan. We are completing the development of the urban planning documentation. Construction works are planned to commence in the fourth quarter of this year or early next year,” comments Andrey Nazarov, CEO of ITMO Highpark JSC.

The ITMO Highpark project is an integrated world-class science, education and innovations center created on the basis of ITMO University and located on the territory of St. Petersburg’s Pushkinsky District with a total area of 100 hectares and the educational, scientific and innovative infrastructure construction scope of approximately 260,000 square meters.

The satellite city Yuzhny is a new district of St. Petersburg planned to feature a comfortable urban environment and new centers of attraction and development of the city and the region at large. It will also be the location of ITMO Highpark, a joint project by the Government of Russia, the city of St. Petersburg, the Satellite City Yuzhny LLC, and ITMO University.

The land asset (2012 ha) in the Pushkinsky District has a very promising location, situated in the Gatchina-Pushkin-Peterhof palace triangle, as well as in the nearby vicinity of the Pulkovo Airport and the St. Petersburg Ring Road, with the adjacent Kievskoe Shosse and two railway stations in the area, 12km away from the ExpoForum congress and exhibition center.

The satellite city Yuzhny is a strategic project of the city of St. Petersburg and features on the shortlist of the Russian Federation priority projects. Yuzhny will have 4.3 million square meters of housing for 134,000 people. The commercial real estate area will amount to approximately 0.6 million square meters. The new district is also projected to create over 50,000 jobs. The total investment in the project will amount to approximately 219 billion rubles.