Eighteen teams participating in this year’s World Robot Olympiad (WRO) had to compete for five main prizes. The team from ITMO University represented Russia at the competition and finished fourth in the Open Category. 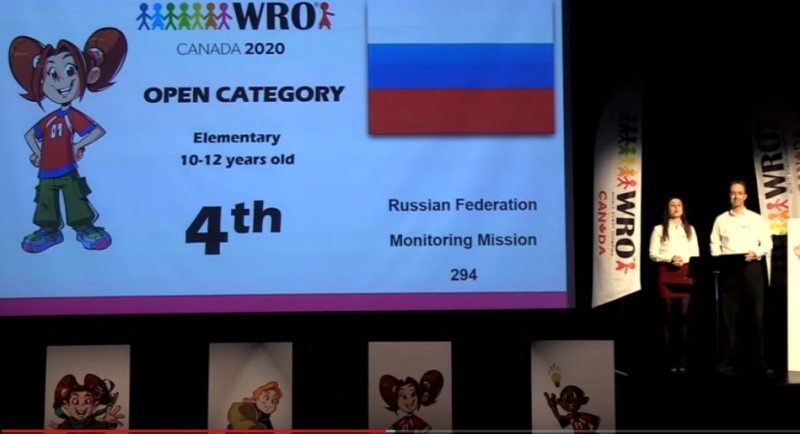 The World Robot Olympiad (WRO) is the largest international robotics competition for high school and university students aged 10-21. The competition has been held since 2004 but this year, the WRO community was not able to meet in person and it was decided to switch to an online format.

The main theme of WRO 2020 was climate change. Initially, the final round was supposed to take place in Canada as the country was severely damaged by forest fires this year and thus the topic of using robotics in eliminating such consequences was especially relevant.

The students of ITMO’s Youth Robotics Laboratory, Stepan Muravev, Aleksandr Syrkovskii, and Iaroslav Lugovskoi, under the supervision of Igor Lositsky assembled a robot that can collect water from a source and deliver it to a laboratory to analyze its composition. The robot operates completely autonomously at all stages – from taking samples from a reservoir to transporting them to the laboratory for analysis.

What makes this project unique is that the robot is able to change its wheels on its own when moving from a muddy area to a clean laboratory.

“The motor-wheel unit is connected to the robot's body using magnetic contacts and not through wires. This is the first time I see such a solution in action,” says Igor Lositsky, head of ITMO’s Youth Robotics Lab. “In the future, this technology can be used to develop robots that can independently change their spare parts such as wheels, manipulators, and so on.”

Originally, a chemical laboratory was not part of the project and its idea belongs to one of the team members. Ekaterina Skorb, head of the Infochemistry Scientific Center, provided the team with the chemicals needed to demonstrate the lab’s functions, as well as consulted them on any issues.

The team was also greatly helped by Daniil Nechaev, a second-year student at ITMO’s Faculty of Control Systems and Robotics and a two-time winner of the WRO competition. The lab’s project is implemented in collaboration with the Presidential Physics and Mathematics Lyceum No. 239 in St. Petersburg.

Late last year, the team started to work on the projects but was forced to shelve it due to self-isolation. Besides, the Olympiad was postponed until next year, so they were pleasantly surprised to hear that the competition would still take place. However, they were in a hurry and the project had to be ready within a month.

Also, for the first time, the selection of participants was chosen by the organizers themselves rather than based on a complex system of regional qualifying rounds. The potential participants had to upload a short video with a demonstration of the robot and its description in English. All the finalists were interviewed online in English and, as noted by Igor Lositsky, this was the most challenging part for the students.

“I found out that we had an interview only the day before. I had to wake them up in the middle of the night, take them to the university, and put them in front of a camera. No interpreters or trainers were allowed to help with the interviews. As a result, the team got a little nervous and could not answer some tricky questions. Perhaps, if not for this, we could’ve got a higher place. But it is their first time participating in a competition, and I think that fourth place at the WRO is more than just a good result,” he says.