The results of this year’s Topcoder Open were announced on November 22. Gennady Korotkevich, a PhD student at ITMO University and an award-winning programmer, won the Algorithm competition for the second year in a row. 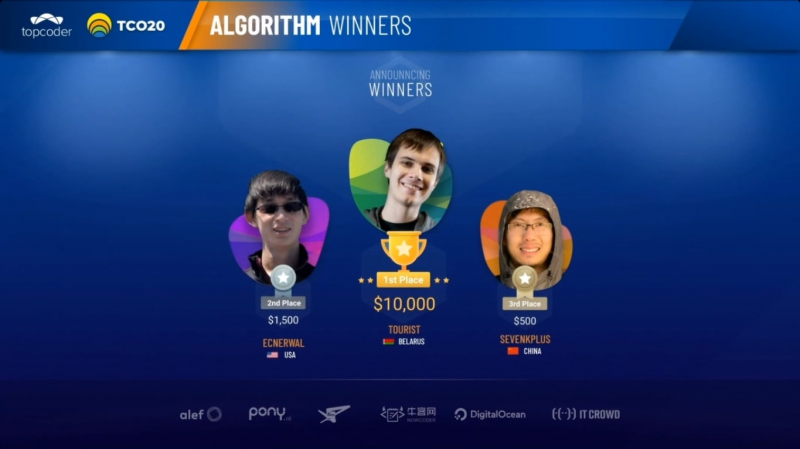 Topcoder Open (TCO) is an annual programming competition organized by Topcoder. Originally launched in 2001, it has traditionally included six competition tracks, which are: Algorithm, Marathon, Development, First2Finish, QA, and UI Design. The championship kicked off on October 1, 2019, and for the first time was held fully online.

Gennady Korotkevich was the first to solve the task of the Algorithm Competition and became a three-time champion.

There were several ways to get into the TCO20 Finals. The Algorithm Competition featured four online stages, two online qualification rounds, up to five on-site regional rounds, and one online wild card round.

The highest scoring competitors from each stage, the fourth online round, and the online wild card round were to compete in the semifinals and finals. Each round and each stage of the competition consisted of one or more separate matches. Each match included three phases: Coding, Challenge (in which participants could test the functionality of other competitors’ code and get extra points), and System Testing (an automated code review). You can learn more about the Algorithm Competition here.

The competition’s semifinal round took place on November 13 and November 18. It brought together sixteen participants but only eight of them, including Gennady Korotkevich, made it to the finals. After the semifinals, he gave an interview that is now available on TCO20’s Twitch channel.

As for the final round, it was held on November 21, and the participants broadcast their screens for those wishing to watch the championship online.

The event was marked by the closing and awards ceremony on November 22. Gennady ‘tourist’ Korotkevich finished first in the competition and received a $10,000 reward. The second place went to Ecnerwal (the USA), and the third was taken by Sevenkplus (China), who won $1,500 and $500, respectively.

Gennady Korotkevich also took second place in the Marathon Competition. Its key feature is that the participants of this track solve optimization problems. In each round, there is only one problem with a solution unknown even to its author. The participants need to write a program that would find the most effective solution in a given time.

Last year, Gennady Korotkevich became the first participant of Topcoder Open who came first in two tracks at once. In 2018, he won the Topcoder Open Marathon. He was also a top-scorer in the Algorithm track at TCO14.

TCO20 also hosts one-day or two-day regional events around the world, such as hackathons, aimed at attracting more participants to the Topcoder Open.