ITMO.GO celebrated the newly-added members of ITMO.Family on the square in front of the Baltic House Festival Theater on the last day of summer. Students gathered to learn more about their new alma mater and make some new friends. 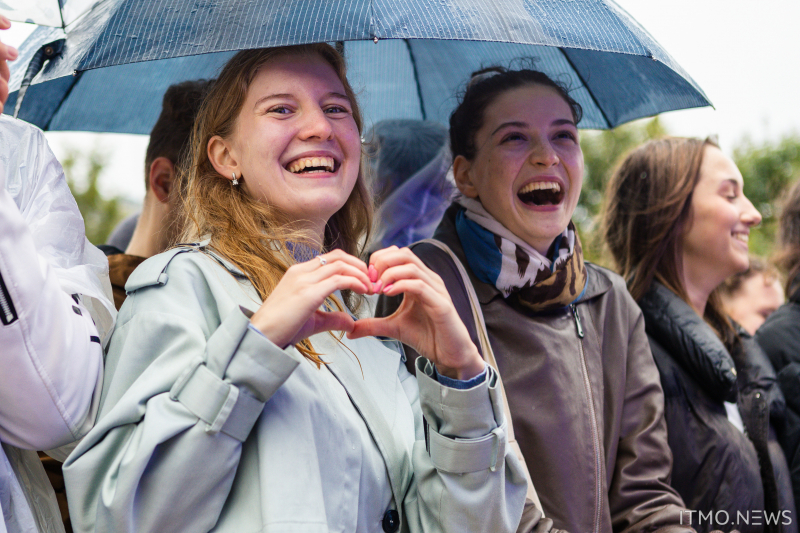 August 31 is a special day for first-year students of ITMO University, because that’s when they receive their student ID’s and get to meet each other and their lecturers. It’s not just a formality – it’s a celebration that surprises the attendees each year.

Before the traditional speech of Vladimir Vasilyev, Rector of ITMO University, the visitors enjoyed an impressive drifting performance on a neon pink car by a professional racer. Then the Rector got onstage, greeting first-year students by high-fiving them along the way.

The Rector discussed ITMO’s values and emphasized that the university aims to help students grow in all aspects:

“At ITMO, there are five key values that you should always keep in mind: respect for the individual, academic freedom, integrity, openness, and the most important one – love for what you’re doing and your surroundings, as well your university, city, country, and life overall,” says Vladimir Vasilyev.

After that, representatives of ITMO’s student clubs took the stage. There was a cheerleading performance by the KronBars sports club, a rap song by ITMO.Megabattle, a standup performance by ITMO.Punchline, and several dance shows by Flame. The celebration concluded with a performance by Dead Blonde, a popular Russian band.

However, it’s the first-year students who were in the spotlight. We met some of them and asked to share their thoughts on ITMO. See what they had to say here (in Russian).