On June 15, the House of the Journalist on Nevskiy prospect hosted the openings ceremony of the press center for the Confederations Cup 2017's non-accredited journalists. During the course of the year's most important football event, any visitor to the press center will have the opportunity to see ITMO's special exposition dedicated to St. Petersburg – Confederations Cup's flagship city. 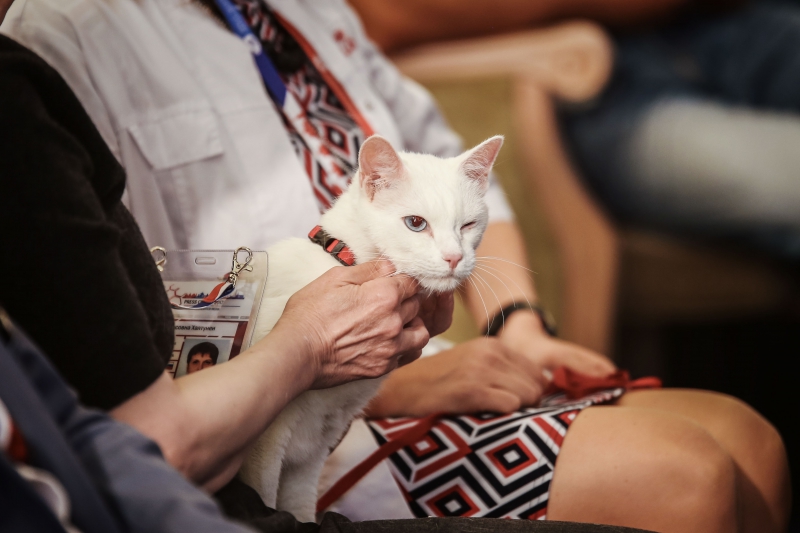 Only a few days remain until the Confederations Cup's opening; at the press conference dedicated to the opening of the press center, the organizers confirmed that the city is 100% ready for the tournament.

"Just recently, the renovation of the House of the Journalist has been finished. The city has completed its reconstruction and remodeling, so I think everyone feels nice here. We've created all the conditions necessary for the representatives of the media to feel comfortable: here we have a resting space, space for work, space for conducting press conferences, and a cafe. As this place is located in the very center of St. Petersburg, it will certainly work efficiently and quickly provide information for the journalists to work with," says Sergei Seleznev, Chairman of the Committee for the Press and Mass Media Cooperation. St. Petersburg is the flagship city of the Confederations Cup - the Northern Capital will host the opening ceremony, the first match and the finals. For this reason, the city has taken up additional liabilities. For instance, at 12:00 on June 17 a fan zone will be opened on the Konyushennaya square. Yet, the organizational committee has prepared entertainment for not just the football fans. At the House of the Journalist, representatives of media from different countries will have the opportunity to see ITMO's special exhibition dedicated to the event - different attributes of St. Petersburg and Russia produced using holographic technology. For instance, there will be a hologram of the UEFA Cup won by St. Petersburg football club Zenit in 2008, optoclones of Faberge Easter eggs, as well as a digital hologram of the Holy Trinity Cathedral of Alexander Nevsky Lavra created in collaboration with ITMO's Greek partners. Among the exhibits, there will also be robots developed for demonstrating the basics of robotics: the robots will tell the guests about themselves and demonstrate basic moves by passing a ball to each other.  In a short while, cups from the ACM ICPC world programming contest will be added to the exposition. "On the day of the opening of the press center, ITMO University and KronBars also conducted an event timed to Confederations Cup 2017 - the finals of the All-Russian Championship of the Association of Student Sports Clubs of Russia in indoor soccer. We've gathered teams from all of the country's regions to compete for the title of Russia's best student team in indoor soccer," shares Evgeniy Raskin, Head of ITMO's Youth Policy Office.

According to Andrei Mushkarev, Chairman of the Committee for Tourism Development, one of the Confederations Cup's organizational committee's main tasks is to give the best impression of St. Petersburg, so that sports events would attract new tourists to the city. Among the committee's other partners, ITMO University greatly contributes to this goal. During the conference Pavel Belov, Chairman of the Committee for Physical Culture and Sports, awarded certificates to the World Cup 2018's ambassadors. Among them, there were dignitaries of sports and culture: Mikhail Boyarsky, Gennadiy Orlov, Vasiliy Gerello, as well as President of St. Petersburg Football Federation Anatoliy Turchak and Zenit's striker Aleksandr Kerzhakov.

The organizers also demonstrated one of St. Petersburg's main mascots of the upcoming Confederations Cup 2017 and World Cup 2018 - a Hermitage cat called Achilles who's been the acting oracle of football championships for the last several years. Achilles was chosen among the many Hermitage cats; according to the museum's staff, the cat has great abilities in analyzing and predicting the matches' outcomes. Achilles will be working from the Hermitage:  the predictions wil be carried out at the Winter Palace's Hanging Garden. The press center at the House of the Journalist will be working until July 3, 2017.

The official opening of the Confederations Cup will take place on June 17 at 4 pm, and as soon as 6 pm the first match of the tournament (Russia - New Zealand) will begin.