The latest edition of the QS World University Rankings, published annually by the UK company Quacquarelli Symonds (QS), has been unveiled. This year, 1,002 universities from 93 countries were included in the ranking. ITMO University has once again demonstrated growth, entering the list of the world’s top 400 universities. 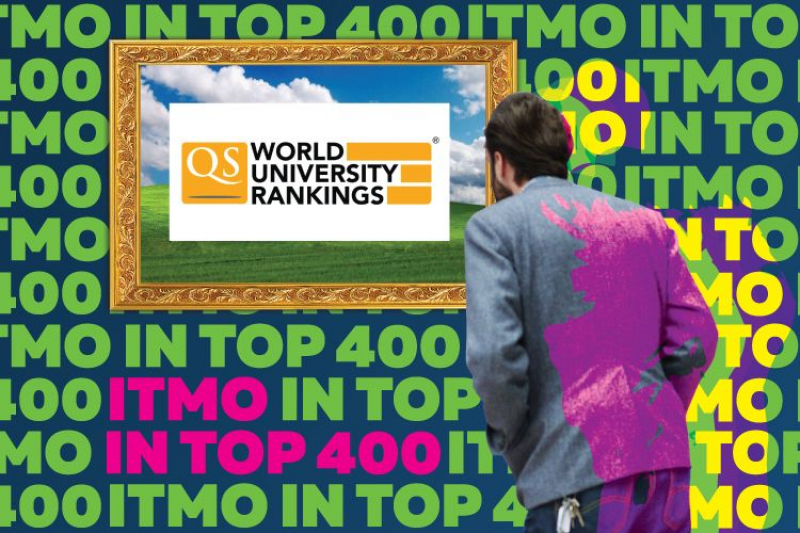 Every year, the UK-based company Quacquarelli Symonds (QS), recognized as global authority on higher education, publishes its ranking of the world’s top universities. Its aim is to help students choose the best place to get their education.

Alongside the Shanghai Ranking (ARWU) and the Times Higher Education World Rankings (THE WUR), QS is one of the rankings used by the Russian Ministry of Science and Higher Education to evaluate the performance of the nation’s higher education institutions.

A university’s position in the ranking is determined by six metrics: academic reputation, employer reputation, faculty-student ratio, the number of citations per faculty member, and ratios of international students and faculty.

ITMO University made its debut in the ranking in 2017; then, it was placed in the 601-650 range. In three years, the university has risen by more than 240 places, now occupying the 360th place (ITMO took the 436th spot last year). At the same time, ITMO University was able to improve its performance in all six metrics.

“With every year, ITMO University is becoming increasingly well-known abroad,” says Ilya Kuftiryov, the head of ITMO’s Rankings Research Center. “This is due to our willingness to engage in research and educational initiatives and to establish joint educational programs in collaboration with our international partners. A total of 46% of all scientific articles published by ITMO University staff are co-authored by international researchers; in Russia, the average value for that metric is around 24%.”

Another important metric is the article citation rate, which is evaluated based on Scopus data. The creators of QS World University Rankings take into account the citations for articles published between 2014 and 2018. In that time, ITMO University staff and their co-authors released over 9,500 publications.

“This is, indeed, a large number,” says Ilya Kuftiryov. “However, it’s not the number of publications that is important in itself, but the citation rate, i.e. the relevance of these research findings among the scientific community, which is what rankings pay attention to, and at ITMO, this number has been growing higher with each year. But another, perhaps even more important aspect is that ITMO University has become a common venue for important, landmark international conferences such as METANANO, Mendeleev 150, and the 20th International Sol-Gel Conference, all of which brought together hundreds of top scientists from all over the world. This is not the cause but the consequence of the recognition our university has gained in various fields of science: from nanophotonics and materials science to colloid and solution chemistry.”

He also notes that one source of potential growth and rise in the rankings is the increase in the number of international faculty members:

“Although ITMO University has already attained great numbers in terms of international students, with almost 2,500 students from around the world pursuing their education here, there is still room to grow in regards to international faculty members,” the expert says. “We must bring in more young postdocs, scientists, and educators who would introduce their own practices, share their experience, and collaborate with students on research.”

Ilya Kuftiryov also points out the contribution of mass media to the university’s recognition in Russia and abroad. Even though the coverage of a university’s activities by internal and outside mass media is not directly measured by the QS ranking, the company’s representatives have, on numerous occasions, singled out ITMO’s website as an example of how an English-language website for a prominent Russian university should look like. Besides English, ITMO also has websites in Spanish and Chinese.

“And, of course, it is impossible not to note once again that ITMO University’s rise in the ranking is, first and foremost, the result of efforts made as part of the 5-100 Project, which aims to improve Russian universities’ positions on the international level.”

It should also be noted that the latest subject rankings QS WUR by Subject were published earlier in March 2020. In the rankings, ITMO University improved its positions in almost all subjects for which it is eligible. It was also named the top Russian university in the Electrical & Electronic Engineering ranking for the second year in a row.