Crystals and Peculiar Stars: Final Day of Mendeleev 150 at ITMO

The international conference Mendeleev 150 at ITMO University has come to its conclusion. The event was held on the occasion of the UN’s International Year of the Periodic Table and brought together the top chemists, physicists, educators, and other experts from Russia, the USA, the UK, Spain, Italy, Germany, Israel, China, and other countries. Over the course of three days, the event’s speakers discussed the top scientific trends and the effects of periodic table-related discoveries on today’s research. The closing presentations were delivered by the Russian crystallographer and chemist Artem Oganov, child prodigy Platon Kachalin, and the evolutionary biologist David Seaborg, the son of famed Nobel Laureate Glenn Seaborg. 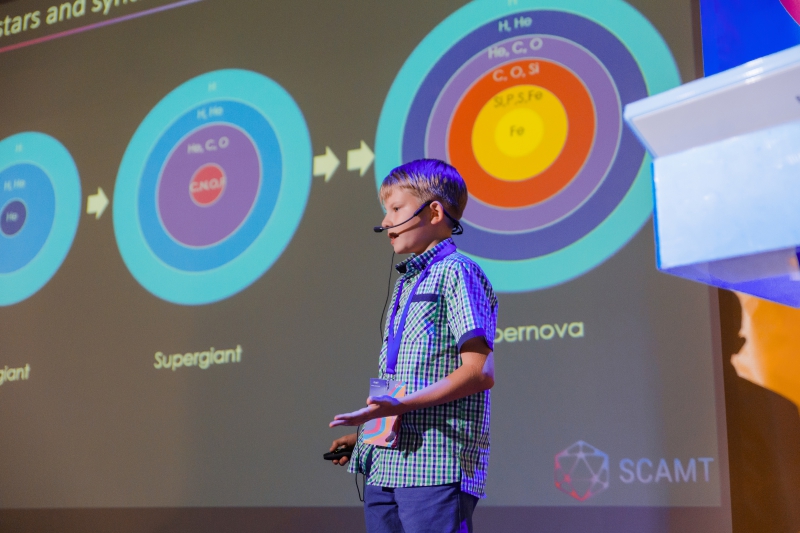 An astronomer’s take on chemistry

One of the conference’s most remarkable speakers was Platon Kachalin, a 10-year old student of the P.L. Kapitsa School No. 1557 in Moscow. Platon is a chemistry and astronomy enthusiast and winner of national competitions in these subjects. At the age of 9, he discovered 7 variable stars (Kachalin 1, 2, 3, 4, 5, 6, 7). Platon’s talk at the conference concerned the topic of peculiar stars, which are stars with unusual chemical make-up.

Since the creation of the periodic table, scientists have worked to discover where each of the 118 elements had come from. Within the first 15 minutes after the Big Bang, hydrogen atoms combined with a cloud of “newborn” particles, which then expanded and cooled down. Some of these atoms went on to form helium. Hydrogen and helium make up 98% of the universe and serve as the primary components of stars.

The first stars formed only about 100 million years after the Big Bang. They were massive and generated energy by way of fusing hydrogen atoms into helium by way of nuclear synthesis, which is what our own Sun does today. When stars run out of hydrogen, they begin to fuse increasingly heavier elements, going down the lines of the periodic table.

For some time, they convert helium to carbon and oxygen. In the final days of a massive star, carbon turns into elements such as sodium and magnesium. Then, oxygen atoms are made into silicon, phosphorus, and sulfur. And at the very end of their lifespan, stars begin to produce metals such as iron.

Elements heavier than iron cause stars to expend more energy than is produced. In less than a second, the star collapses in on itself and then becomes an exploding supernova, releasing the new elements into the Universe.

There exist several groups of stars distinguished by their unusually high concentration of heavy chemical elements. Stars of this kind should not exist, and thus present a subject of great interest to scientists.

The American astronomer William Morgan first brought attention to these stars back in the 1930s, but it was another astronomer, Paul Merrill, who began to look into the phenomenon. He discovered that certain red giants featured absorption lines in the spectra of various exotic metals, including technetium. Merrill’s discovery heralded the foundation of a completely new field of study: stellar nucleosynthesis.

In 1951, researchers Bidelman and Keenan had first recognized barium stars as a class of red giants. Barium stars, it is theorized, are evolved G, K, and M-type stars with a luminosity class of I to IV and a temperature of 4300 to 6500 K. They also possess strong spectral lines and carbon-rich molecules such as CH, CN, and C2.

Initially, it was not quite clear how stars of this kind are able to produce an element as heavy as barium. Later observations, however, showed that all barium stars are actually parts of double stars, with the second star usually being a white dwarf. The presence of barium, thus, is a sort of pollution induced by the donor star. It is thought that barium stars have once been main sequence stars, and their partners were once carbon stars on an asymptotic giant branch.

And that is how chemistry is able to provide answers to questions that require the understanding of different fields. The boundaries between sciences have been blurred, and one may often answer the questions posed by others.

David Seaborg on his father’s legacy

The evolutionary biologist and peace activist David Seaborg took to the stage to speak about his family, and namely his father, Glenn Seaborg, a Nobel Prize laureate involved in the discovery of ten elements of the periodic table, plutonium being the most well-known.

Glenn Seaborg was born in Michigan, USA in 1912. At the age of ten, he and his family moved to California, where his chemistry and physics teacher Dwight Logan Reid inspired him to pursue chemistry.

After getting his degree in chemistry from UCLA, Seaborg received his PhD in chemistry from UC Berkeley, where he took part in the discovery of iodine-131. This isotope is widely used in medicine and even helped prolong the life of Seaborg’s mother, who suffered from hyperthyroidism. At Berkeley, he learned about research as a lab assistant to famed chemist Gilbert Newton Lewis.

Seaborg’s research team believed that plutonium might be the final element of the periodic table, and thus named it after the planet Pluto.

Seaborg’s actinide concept (a “family” of 14 radioactive chemical elements situated in the seventh period of the periodic table behind actinium) was the first major revision to the periodic table since its invention by Dmitri Mendeleev in 1869.

Glenn Seaborg passed away in 1999 after suffering a stroke six months prior.

Among the conference’s final speakers was also Artem Oganov, a Russian crystallographer, mineralogist, chemist, and professor of the Russian Academy of Science, known for his research on computational discovery of new materials and prediction of crystal structures.

Until the mid-00s, the scientific community believed that crystal structures were fundamentally unpredictable. The opinion has changed since, and the USPEX method, developed by Oganov’s team, played a special role in that. USPEX has been developed by the team since 2004 and is used by more than 5,000 researchers worldwide.

USPEX is an evolutionary algorithm combined with quantum mechanics-based computation. It solves the “unsolvable” task of structural prediction of 3D, 2D, 1D, and 0D systems, as well as the prediction of phase transition mechanisms. It can be used to predict the corresponding stable crystal structures for particular chemical compositions and can even predict all stable connections made by chosen elements.

In his talk, Oganov provided an in-depth examination of his methodology along with its applications in several physics and materials science problems. To detect technologically useful materials, Oganov’s team has developed a multi-objective optimization algorithm Pareto and applied it in several studies. One of the methods, dubbed Mendeleev Search, is capable of finding the best materials among all possible composites of all possible crystal structures.

Dr. Oganov also discussed the results of the latest research in several fields: the discovery of new chemical phenomena and new superhard materials, the use of which is expected to replace materials in current use, the prediction of new high-temperature semiconductors, new chemistry of nanoparticles, and a possible explanation of the carcinogenicity of oxide dust. He also spoke about the current limitations and possible prospects of these methods.