Mendeleev 150, MedChem 2019, and Marnikov Congress: the International Year of the Period Table in Russia

In Moscow, an official ceremony has celebrated the opening of the International Year of the Periodic Table. President of the Russian Academy of Sciences Alexander Sergeev, Russian Prime Minister Dmitry Medvedev, renowned scientists, officials, and representatives of scientific and public organizations from around the world have attended the event. Throughout the year, many events in Russia and abroad will be dedicated to the topic of the Periodic Table of Chemical Elements. Below is a list of all the important chemistry-related events that will be held in Russia this year. 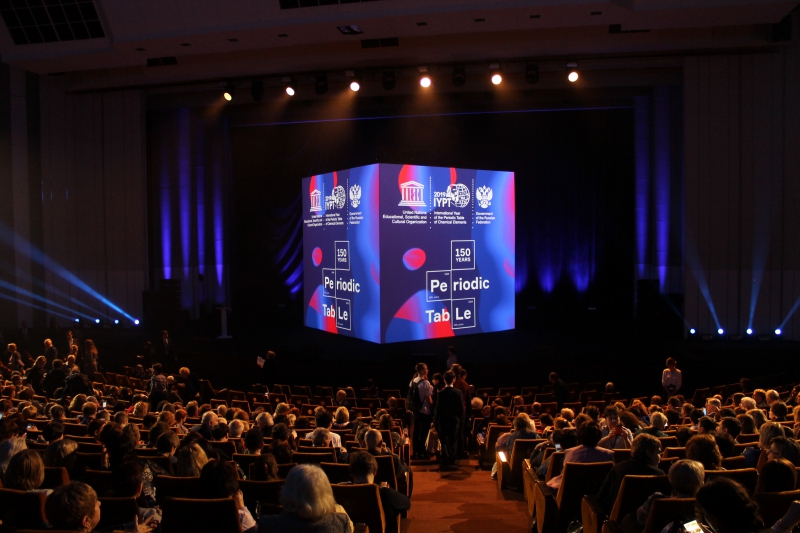 On the 150th anniversary of the creation of the Periodic Table, the UN has deemed 2019 the International Year of the Periodic Table of Chemical Elements. On January 29, in Paris, the UNESCO headquarters hosted an opening ceremony to ring in the year. In Russia, the ceremony was timed to coincide with February 6, the Russian Science Day and the birthday of Dmitri Mendeleev, and was held at the headquarters of the Russian Academy of Sciences (RAS) in Moscow. Prime Minister Dmitry Medvedev, who chairs the organizational committee for the International Year’s events, attended the ceremony and delivered an opening address.

“The events will take place throughout the year, but the work that began on the 150th anniversary of the Periodic Table must be continued beyond; support must be provided for promising research and collaboration established with scientists from all over the world. The popularization of science is our goal for the decades ahead, and it is accounted for by state programs including the national project Science,” said Mr. Medvedev.

The initiative for the naming of 2019 as the International Year of the Periodic Table was put forth by the Mendeleev Russian Chemical Society, the Russian Academy of Sciences, the Ministry of Science and Higher Education, and by individual scientists from Russia and abroad. It was supported by other countries, international organizations, and more than 80 national academies of science and scientific societies, including the International Union of Pure and Applied Chemistry (IUPAC), International Union of Pure and Applied Physics (IUPAP), European Chemical Society (EuChemS), International Astronomical Union (IAU) and others.

The decision to deem 2019 the year of the Periodic Table has a special significance for Russia, say RAS officials. Its events will help promote the international recognition of the great Russian scientist Dmitri Mendeleev’s achievements and boost the prestigiousness and popularity of Russian Science, said Alexander Sergeev, the president of RAS, during the opening ceremony in Moscow.

“The fact that every single country had responded to our call to name 2019 the year of the Periodic Table was very significant. Although we have gotten used to calling it the Mendeleev Table, that is not the tradition around the world, and thus officially it is named the International  Year of the Periodic Table of Chemical Elements. Nevertheless, the great scientist’s visage can be seen on the official logo. His achievements are, undoubtedly, recognized,” noted Dr. Sergeev.

In numerous countries, the year’s events will be supported by UNESCO. They will include conferences, exhibitions, competitions for young scientists and much more.

One of the year’s main events will be the Mendeleev 150 4th International Conference on the Periodic Table, officially endorsed by the IUPAC and UNESCO. Held at ITMO University, its organizing committee is staffed by the representatives of three renowned universities: Dr. Mikhail Kurushkin (ITMO University, Russia), Prof. Eric Scerri (University of California, the USA), and Prof. Philip Stewart (University of Oxford, the UK).

The conference’s all-time top highlight is its list of speakers, and this year’s list includes 21 scientist, many of whom are known the world over. For instance, the guests of the conference will have the opportunity to attend lectures by chemist Peter Atkins (a Fellow of Lincoln College at the University of Oxford and the author of numerous popular chemical textbooks), evolutionary biologist David Seaborg (University of San Francisco), physicist Hideto En’yo (director of the RIKEN BNL Research Center), and professor Pekka Pyykkö of the University of Helsinki, who is known for his extension to the periodic table of elements. The list of speakers also includes the Russian theoretical crystallographer Artem Oganov.

A pleasant bonus for the participants is the entrance fee: for students, it will only cost 30-35 EUR, which is a whopping 80% discount as compared to the regular 150-175 EUR fee. The application deadline for participants is March 26.

The 4th Russian Conference on Medical Chemistry will be held at the Yeltsin Ural Federal University and Mikheev Institute of Metal Physics. MedChem Russia conferences are held every two years at various major scientific, educational and cultural centers of the nation.

The goal of this series of conferences is to analyze the latest research, methods and advanced technologies in the field of medical chemistry and drug development. The program of MedChem Russia 2019 includes plenary lectures, oral reports and poster presentations, a Youth School Conference on medicinal chemistry, and roundtables of computer chemistry, cell technologies, medical materials and anti-tumor and antiviral pharmaceuticals.

The Markovnikov Congress on Organic Chemistry will open on June 21 in Moscow with a pre-symposium; it will then commence on June 24 to 28 in Kazan. Dedicated to the 150th anniversary of the Markovnikov's rule, which was discovered by the Russian scientist Vladimir Markovnikov in 1869, it is organized by the Lomonosov Moscow State University and Kazan State University.

The Congress on Organic Chemistry will combine two interconnected scientific events: the IХ International Symposium «Design and Synthesis of Supramolecular Architectures» and the International School on Cheminformatics. Among the events’ topics are the mechanisms of chemical reactions and the structure of organic compounds, the chemistry of natural compounds, medical chemistry, organic products and materials, and more (see the full list here). The list of invited speakers includes experts from Russia and the world.

The conference is organized by the European Chemical Society (EuChemS), the largest organization that represents the various European national chemical societies and other chemistry-related organizations. Its main goal is to establish a platform for scientific discussion and to provide a singular, unbiased European perspective on the key political issues in the field of chemistry.

Among the EICC-5’s Russian organizers are four organizations: the Mendeleev Russian Chemical Society, the Kurnakov Institute of General and Inorganic Chemistry, the Nesmeyanov Institute of Organoelement Compounds and the Frumkin Institute of Physical Chemistry and Electrochemistry. Among its topics are coordination and supramolecular chemistry, catalysis and organometallic chemistry, transition metal and main group chemistry, computational chemistry, medicinal and bioinorganic chemistry, and others. The abstract submission deadline is February 24, 2019.