ITMO University has recently hosted the Mendeleev 150 International Conference. Held as part of the International Year of the Periodic Table, the conference brought together leading specialists in the field of chemistry, physics, and history of chemistry from Russia, the USA, the UK, Spain, Italy, Germany, Israel, China, and other countries. In the course of three days, they discussed key trends in modern science and discoveries related to the periodic table. 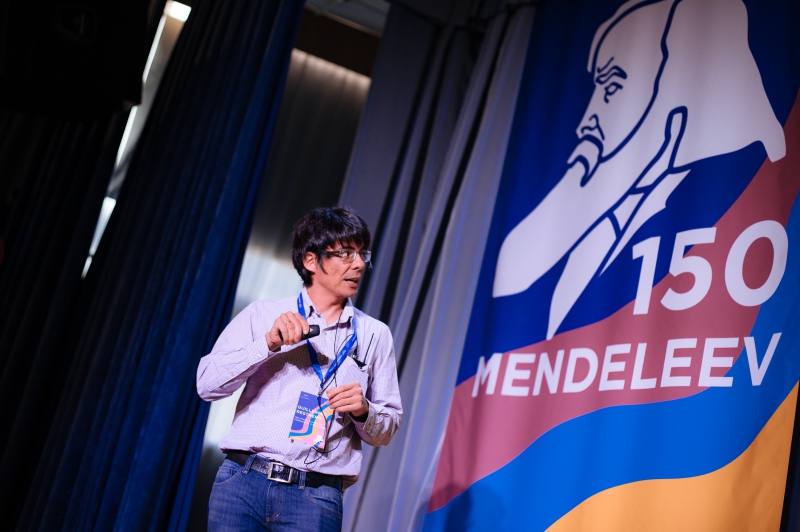 The Mendeleev 150 International Conference is supported by the International Union of Pure and Applied Chemistry (IUPAC) and UNESCO. Organizing the conference were PhD in chemistry Mikhail Kurushkin (ITMO University), Prof. Eric Scerri (the University of California, Los Angeles, the USA), and Prof. Philip Stewart (University of Oxford, the UK).

It is the first time Russia is hosting the event of such scale. As noted by Eric Scerri at the opening ceremony, there have been only three conferences dedicated to the periodic table in the world so far. The first one took place in the Vatican in 1969, while the second and the third were held in Canada and Peru in 2003 and 2012, respectively. However, it is in St. Petersburg that Dmitri Mendeleev came up with his first, complete version of the periodic table and that the museum commemorating this distinguished Russian scientist is located.

Greening the participants was ITMO University rector Vladimir Vasilyev. Among other things, he noted that ITMO University is now one of the leading universities in Russia. Among the fields it specializes in are IT, cyber-physical systems and robotics, photonics, metamaterials and quantum technologies, as well as life sciences, the field that has started to gain popularity in recent years.

“Just some five years ago, we started to develop this new field at ITMO University, chemistry and biology. Already this year, we’ve taken the lead in chemistry and chemical technologies among Russian universities according to the “Expert” analytical center’s subject rankings. I think that work in this direction has also allowed us to become the organizers of the Mendeleev 150 International Conference,” shared the rector.

The program of the conference consisted of three days; a total of 30 speakers presented the results of their work. Among them were not only renowned experts in the fields of chemistry, physics, education, philosophy, history of science, authors of popular student books in chemistry but also young researchers. According to Mikhail Kurushkin, the program of the conference and the topics of presentations go in line with the mission of the International Year of the Periodic Table.

“It took me and David Avnir, the co-head of the SCAMT International Research Center, over a year to develop this program, which would cover all of the most topical questions in modern chemistry. To achieve this, we invited top specialists in their fields. However, it was not only renowned researchers who could take part in the conference but also talented school students. First of all, because it goes in line with ITMO University’s values, and second, because it’s the mission of the International Year of the Periodic Table – to make science accessible to a wide audience,” comments Mikhail Kurushkin.

A total of 300 participants from Russia, the US, the UK, Spain, Italy, Germany, Israel, Taiwan, China and other countries came to St. Petersburg to take part in the conference.

Opening the conference was Jordi José, an astrophysicist at the Technical University of Catalonia in Spain, who talked about the synthesis of chemical elements in space. Japanese scientist Hideto Enyo, the director of the RIKEN Nishina Center for Accelerator-Based Science, expanded on the discovery of the 113th element of the periodic table, nihonium (an interview with the researcher is available here). Veronica Elkina, a student of the school 197, presented the geography of the discoveries related to the periodic table elements.

Among the speakers and guests of the conference were also chemist Peter Atkins (Professor of Chemistry at Lincoln College at the University of Oxford and the author of numerous popular chemical textbooks), evolutionary biologist David Seaborg (the University of San Francisco, the US), professor Pekka Pyykkö from the University of Helsinki, who is known for his expanding of the periodic table of elements, Russian theoretical crystallographer Artem Oganov, professor of Lomonosov Moscow State University Evgeny Babayev, and others.

The participants shared with ITMO.NEWS about the atmosphere of the event, key trends in modern chemistry, and how to explain complex phenomena in simple words.

I’m glad that it’s ITMO University who organized the Mendeleev 150 International Conference. I really liked the poster session, it was very well-organized. As for the latest achievements in chemistry, I have to highlight the discovery of oganesson, named after Prof. Yuri Oganessian, a Soviet and Russian nuclear physicist and a researcher at the Flerov Laboratory of Nuclear Reactions at the Joint Institute for Nuclear Research.

Jordi José, professor at the Technical University of Catalonia

People have long been interested in the chemical properties of the elements of the periodic table. But how do these elements come into existence in the universe? This is the topic I’m most interested in and I hope that I’ve managed to communicate my main message to the audience: in my opinion, this is the work of many types of stars that causes the synthesis of chemical elements in our universe.

In my presentation, I used, among other things, extracts from popular comic books. I think that the best way to explain complex things to the audience, especially kids, is to talk in their language. The thing is that they are not experts, they don’t know what you know and if you want to inspire them, you have to help them understand that science can be fun.

Peter Atkins, professor at the University of Oxford

First of all, I’m really glad to visit St. Petersburg. Apart from that, participation in this kind of conferences, which cover a wide range of topics, allows you to stay young, as well as gives you an opportunity to communicate with your colleagues and friends. What is particularly good about this conference is that among its participants are not only experts but also students and just people interested in science. Together, they make a pretty difficult audience to talk to. When talking about something difficult, I usually use visual instruments. It also helps me communicate with those who don’t know English perfectly.