ITMO University marked its 121st anniversary with a five-day celebration on March 22-26. The events took place at campuses on Kronverksky Pr. 49 and Lomonosova St. 9, as well as on ITMO’s official VK and Facebook pages. 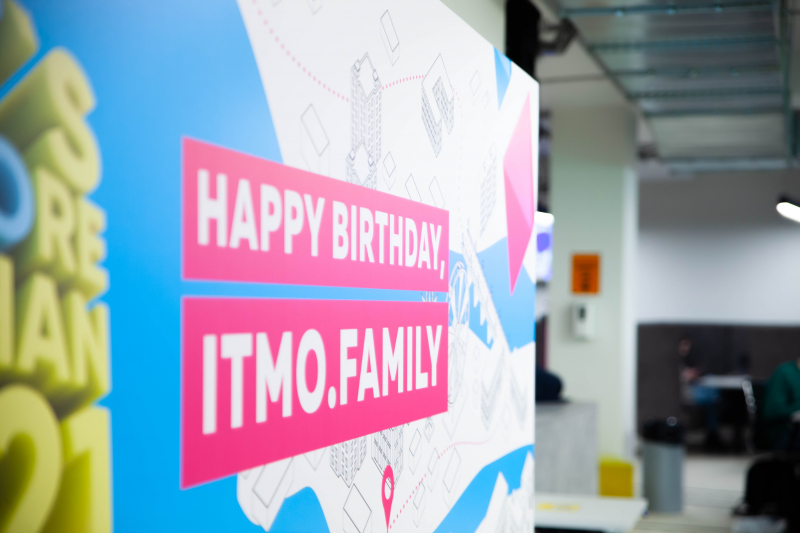 On this occasion, the university threw a series of offline and online events. Students could take quizzes to demonstrate their knowledge of ITMO University, voice their thoughts at the special “I want to say” area, and sing a karaoke version of the ITMO With You tune. They could also take their chances at various giveaways on VK and Facebook and, for example, win the chance to see their wishes to the university posted on the platforms.

The celebration also included a number of educational events: an in-lab live stream on food tech by ITMO’s Infochemistry Research Center and Dmitry Vinogradov, a participant of ITMO Accelerator and the founder of the FlashFood project, as well as an open debate “Sports at the University of the Future” timed to both the fifth anniversary of the rowing club and the university’s birthday.

“We decided to bring these two events together and invite university graduate Valentin Zanin,  winner of the European Rowing Championships and a participant of the 1956 and 1960 Olympic Games. Now he is a successful entrepreneur engaged in the development of magnetic levitation railways who also actively supports ITMO students. We also invited Victor Yanovsky, the vice president of the student rowing league and held an open dialogue on the prospects of student clubs,” says Lyudmila Tsoi, a manager at ITMO’s Center for Creative and Corporate Projects.

Another unique event was created in partnership with Alexander Golovaty, also an ITMO graduate whose platform WeGoTrip was chosen to feature an hour and a half historical route through ITMO campuses and venues of the university partners: the Yasnaya Polyana coworking space, Singer House, which serves as the headquarters of VK, as well as the Yandex store and museum.

“We developed the route and texts for these tours on our own and while doing it, we spotted a range of interesting parallels and common grounds. For instance, the building on Birzhevaya Liniya once belonged to the Eliseevs, one of the wealthiest families in St. Petersburg who were incredibly successful merchants. Now it is home to ITMO Accelerator and Technopark that train a new generation of successful entrepreneurs,” adds Lyudmila Tsoi.

Moreover, the organizers arranged visits to places that are usually closed, especially during the quarantine. For example, thanks to ITMO graduates who now work at VK it has become possible to see the interiors of Singer House. “This is another feature of our project – at such locations with limited access, we filmed dance performances together with the team of contemporary and street dance club FLAME. So, now all visitors have a unique opportunity to not only see these buildings from the inside but also plunge into the aesthetics through dance,” adds Lyudmila Tsoi.

Those who register in time for the tour (the number of places is limited) will be able to visit ITMO University's Museum of Optics for free and receive a 15% discount at the Yandex Store and Museum. And those who post photos from the tour with the hashtag #wego_itmo on VK and Instagram will have the chance to win a special ITMO.HB-Box with a bunch of ITMO merch. The giveaway will run all April with winners announced every Friday.

The center’s staff emphasized that they wanted to make a holiday not only for students but also for the entire ITMO.FAMILY.

“It’s amazing that we managed to bring together not only our students but also staff and graduates. Together we held useful and interesting events, learned more about ITMO, its history and its present, as well as had the chance to look into the very heart of our laboratories. I think we created a festive atmosphere and gave everyone the opportunity to get to know each other and communicate,” concludes Lyudmila Tsoi.