DreamDorm.Shine Contest: Prove YOUR Room is the Best!

The DreamDorm.Shine contest has launched at ITMO University. Its goal is to encourage students to treat their dormitory with care, develop their communication skills and promote cooperation. In this endeavor they will be assisted by ITMO’s Student Dorm Council, which has recently won the second place in a city-wide competition for the best university & college student dorm council of St. Petersburg. 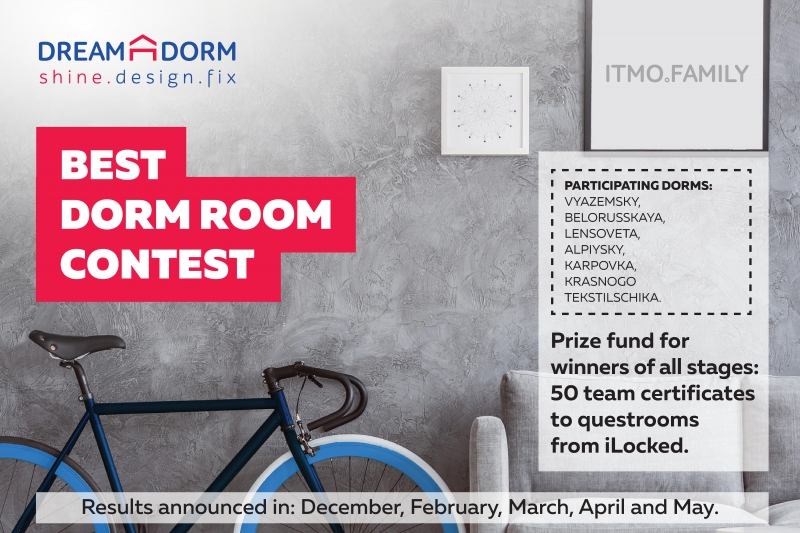 A similar competition (link in Russian) has previously been held in ITMO’s dormitories, but back then it was focused more on identifying the residents who kept their rooms in disarray or caused damage to property, meaning that the contest committee had to inspect all of the rooms. This year’s competition, however, aims to seek out the students who treat their dorm room like their home, and the committee will only assess the rooms the residents of which have applied to take part in the contest.

“This contest aims to encourage the students to change the way they see their dorm rooms, to show them that it is their home and they have to treat it with care. There are many students in our dormitories today who already do their best to keep their rooms comfortable and neat, and these people won’t need to apply much effort to take part in the contest. However, there are unfortunately still some who treat their dorm like something single-use, something they can use and then throw away,” - explains Evgeny Raskin, head of ITMO’s Department of Youth Policy.

Students don’t need to perform any incredible feats to compete in the contest. All one needs to do is make sure the room is clean and orderly, maybe add some plant life and hang up curtains on the windows. The contest committee will especially appreciate a stylishly designed room - provided it was done without causing damage to the walls or furniture - and other creative flourishes. Other important criteria are fully paid dorm fees, adherence to the dorm rules and regulations, compliance with fire safety and other standards. To participate, one must form a team with their roommates. The best rooms will be chosen at each of the university’s dormitories once a month throughout the academic year, up to and including May. Winners will be awarded gift certificates from the iLocked questroom company. Applications can be made on the Student Union’s website. Residents of the following dormitories can take part:

In addition, competitions for the best interior design project and best renovation will also be held this academic year. Many students, once they’ve settled into their dorm, conduct renovations at their own expense. Winners of these competitions will be able to receive compensation for their efforts. ITMO University’s Student Dorm Council will help conduct the competition. The council’s members have recently become winners of the competition for St. Petersburg’s best student dorm council. The competition was organized by St. Petersburg government’s Youth Policy Committee in cooperation with the city Student Council. The competition’s first round involved the councils of more than 40 dorms. However, most of these were quickly weeded out, since many of them failed to pass the tests on their familiarity with the rules and regulations of managing dormitory spaces, as well as the relevant legislation.

Only nine councils took part in the second round. The teams were taken for a three-day stay at an out-of-town camp, where they presented videos and presentations about their dorms, demonstrated their knowledge of the legal matters of dorm life and showcased the results of surveys. ITMO’s Dorm Council managed to survey approximately 170 residents of the Vyazemsky dorm in a short period of time. “It’s really great that the competition emphasized the knowledge of legal regulations. A student dorm council’s purpose is to protect the students, and to do that, you have to know how to do it right,” - says Vladislav Volosin, chairman of ITMO’s Student Dorm Council.

In the end, the university’s Vyazemsky dorm was named the city’s second best. The jury also evaluated the dorm’s facilities and visited the building, its leisure center, cafeteria, library, dorm council office and several of the rooms. Per the results of that inspection, the dorm also won a special prize for the best upkeep in common areas.