On February 4-11, a group of ITMO University students traveled to the Tosnensky District in Leningrad Oblast, 53 km southeast of St. Petersburg, to take part in volunteer activities: shovel snow, chop wood, as well as perform concerts and teach lessons at local schools. All this was part of the national initiative “Winter Forces 2018” that aims to promote volunteering among the youth and foster values of healthy living. Members of the student team spoke to ITMO.NEWS about their experience of helping people. 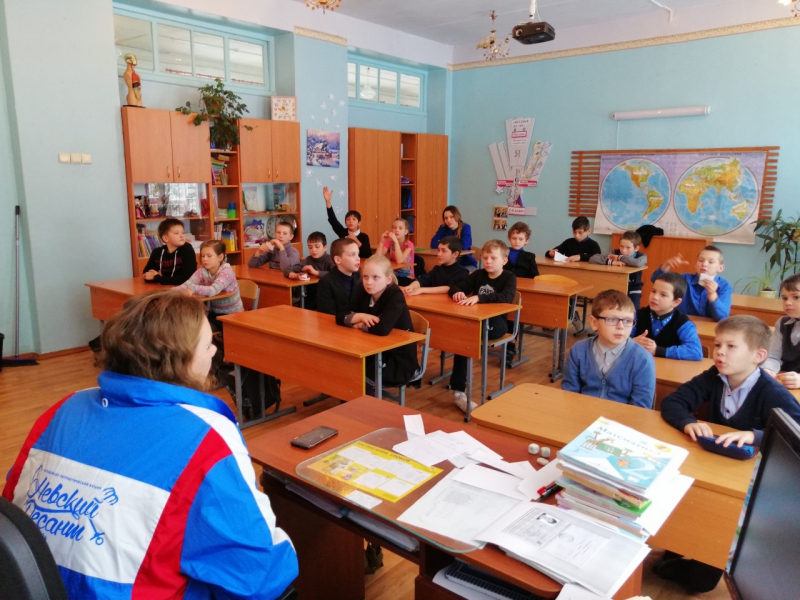 Team "Light" at a school in the Tosnensky district.

The “Winter Forces” initiative was born in 1969 in the Altai Krai. Back then, local students had decided to spend their winter holidays by skiing to neighboring villages and helping out the locals. It soon became popular in other regions and remained popular all the way through to the current day. Its main goal has remained the same: to visit remote settlements, help people, and meet with local schoolchildren for career guidance sessions.

Starting in 2015, the student organizations of St. Petersburg and the Leningrad Oblast have carried out their own program, “Neva River Forces”, the participants of which grow in number each year. In 2019, the program was joined by the team “Light”, made up of 18 ITMO University students. Together, they went on a trip to the Tosnensky District of the Leningrad Oblast.

“What’s great is that we’re involved in a really wide variety of work: we teach classes at schools, hold concerts for schoolkids and adults, shovel snow, and carry firewood,” says Anastasiia Racheeva, who took part in the initiative for the first time. “My favorite part is teaching first-to-ninth-graders. We try to do something cool and unusual. We tell them about healthy lifestyle and history, and host creative workshops. There is, for instance, the creativity lesson where the kids get to come up with their own marketing campaigns for major brands. At the film lesson, they write screenplays and then use them to make movies. Then there’s “World By Touch”, where we ask kids to try and spend an entire day without access to their eyesight to understand the experiences of visually impaired people. My favorite lesson is about cryptography, where we talk about various kinds of ciphers and then cipher and decipher our own messages. Every lesson is like trying on a new lifestyle, and the kids really like it. They ask questions and approach us during breaks to chat. After every lesson, someone would come up to us to take a picture, give us a memento, a hug, or just to say “thanks”.”

Taking part in the program can also double as a test of one’s health and resilience. Throughout the week, the students have to get up early and spend the whole day volunteering. According to Oleg Derkach, for whom this is his third time with “Neva River Forces”, it gets easier every time.

“My first time was difficult in terms of sleep; I wasn’t used to sleeping four hours a day and, by the fourth day, I didn’t feel so good. And when I came home, I slept for 16 hours straight. Giving lessons was also scary: when I went to my first lesson, I was very nervous, but by the second time I had completely relaxed and could teach any topic. It was much easier in my second year, and in my third, I went as a group leader. I had to draw up our route and coordinate transportation, food, and lessons with each school. It was also important to keep track of the time and get the team on the bus. Being a regular team member is easier, of course. What I like about the program is the idea of going away for a week and doing something different. Lessons, concerts, social and physical activity, and late-night events for the team. Once you are immersed in all that, you don’t have time for anything else; it’s as if you’re cleansed of all the troubles and concerns you left in the city,” shares Oleg.

In addition to the team leader and the regular members, the team includes a “kommissar” who is responsible for the team’s entertainment program. This year the responsibility went to Uma Agaeva.

“I was responsible for the entertainment program and the team’s emotional state. I didn’t choose this position myself but was appointed by our previous leaders. As they explained, they have kept an eye on my work all through the year; for years I’ve been a counselor for a pedagogical volunteer team, and thus have experience in organizing games and events. Of course, there are joys and difficulties to any kind of responsibility, but I only see the advantages of being a kommissar; it helps me grow as a person,” says Uma.

The “Neva River Forces” initiative is organized by the St. Petersburg administration of student teams. To become a member of the team, applicants need to pass a selection process during which the candidates are split into pairs and tasked with designing a lesson for schoolchildren.

To apply to be a member of “Light”, visit the team’s official community on VK.