Earlier in the year, the pandemic brought serious changes to the lives of people all over the world and led to the cancellation or rescheduling of many events. Among other things, the epidemiological situation makes it impossible to conduct marches of the “Immortal Regiment,” a tradition that many Russians have already become accustomed to. Its organizers decided to conduct the event online and give people the opportunity to remember their veteran relatives and tell their stories. Specialists from ITMO’s National Center for Cognitive Technologies helped them by proposing to conduct the event online using the framework of their app HowWeSurvive. 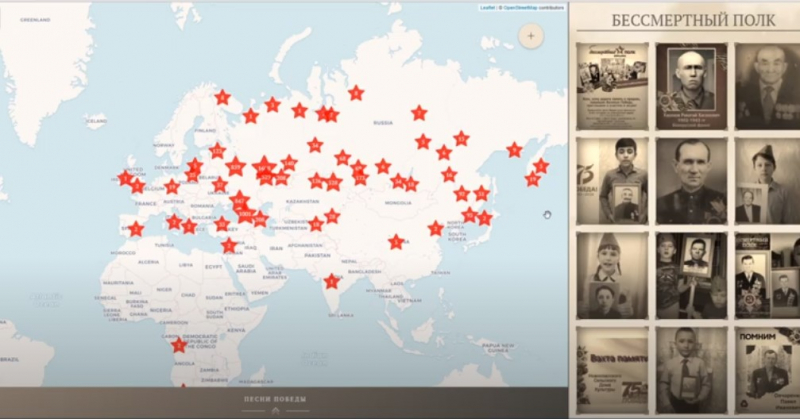 About ten years ago, a group of journalists from Tomsk – Sergei Lapenkov, Sergei Kolotovkin and Igor Dmitriev – started to notice that events dedicated to May 9, or Victory Day, had begun to gather fewer and fewer veterans of the Great Patriotic War. So, they decided to organise a march where everyone willing could come and bring portraits of their veteran relatives. These marches, dubbed the “Immortal Regiment”, have since become one of the most massive events to take place in Russian cities. Every year, millions of people in hundreds of towns gather to commemorate those who defended the country against the Nazis.

Still, in the face of the pandemic, gathering for such an event was deemed impossible. So this year, the organizers decided to conduct it online: people can upload portraits of their relatives and share stories about their participation in the war. Oleg Basov, deputy dean of ITMO’s Faculty of Infocommunication Technologies, proposed to go even further and bring the Immortal Regiment if not out to the streets of cities, but at least to their locations on an online map.

“I contacted Sergei Kolotovkin, the co-chairman of the Council of Interregional Historic and Patriotic Movement “The immortal Regiment””, says Oleg Basov. “By that time, we already had a prototype of the app. We discussed the technical details, and “The Immortal Regiment” agreed to publish a link to our app on their website. As opposed to the ways to honor the memory of the participants of the Great Patriotic War that were offered by the organizers, we offered a solution based on an interactive map, a virtual march where people would see who is being remembered in their cities.”

The solution was based on the app HowWeSurvive, which was developed by Alexander Visheratin and Iuliia Fedorova, staff members of ITMO’s National Center for Cognitive Technologies, to help combat self-isolation loneliness. The programmers agreed to help create a map for the virtual march of the Immortal Regiment.

“We implemented three ways to publish the photos of one’s relatives on the map,” says Alexander Visheratin. “The simplest is to make a geo-tagged Instagram post with the hashtags #бессмертныйполкдома, #мойполкдома or #бессмертныйполк. After a short moderation period, such posts will be automatically added to the map. The second option is to add an existing post in a social network by pressing the relevant button in the app and specifying your location. Finally, the third option, for those who don’t use social media, is to open the app, fill in a short form and state the name of their relative, their rank and other details, attach a photo and publish this information directly in the app.”

The app will make use of ITMO University’s resources. The testing will begin in early May, so that by Victory Day all technical issues would be solved and the interactive map would be filled with participants’ posts.

“Without question, “The Immortal Regiment” is a significant national tradition in regard to preserving personal memories of the generation of the Great Patriotic War. We are happy that the combined effort of ITMO’s specialists and the Immortal Regiment’s  coordinators will make it possible to conduct this important solidarity event online, regardless of the COVID-19 pandemic. We hope that this initiative will help every person, every family to feel their involvement in the event and honor the memory of their relatives who were veterans of the Great Patriotic War, and participate in the Victory Day festivities in a safe way. In such times, it is especially important to stand together, even if it’s online,” comments ITMO’s Rector Vladimir Vasilyev.

“This year, it happened so that the Immortal Regiment won’t march on the streets of villages and cities. On the other hand, the Regiment’s organizers have always underlined that it’s not as much about marches as it is about personal memories. And it will only be right if on Victory Day, we’ll be honoring our veterans with our families, looking at their photos, sharing our memories of them with our children. And thanks to the technologies and the opportunities offered by the Internet, we’ll get to see like-minded people, those for whom honoring the memory of the generation of the Great Patriotic War is important. And we are thankful to specialists from ITMO University for this opportunity and their help with organizing the online march of the Immortal Regiment,” underlines Sergei Kolotovkin.