One Hour: A Trip to Catherine Palace

Catherine Palace is located 30 km south of Saint Petersburg. It’s an hour’s drive from Saint Petersburg. It was the summer residence of the Russian tsars. And we were there on 12th May 2019. The trip was organized by the ITMO.STUDENTS community. On May 12, everyone arrived at Kronversky on time and the BUS departed from the main campus of the university at the scheduled time. A lady guide was with us. We were about more than thirty students on that trip, including international students. When the boarding was finished, our student IDs were taken from us by the lady guide. The bus departed at 10:47 am and arrived exactly after one hour 11:47 am at Catherine Palace. 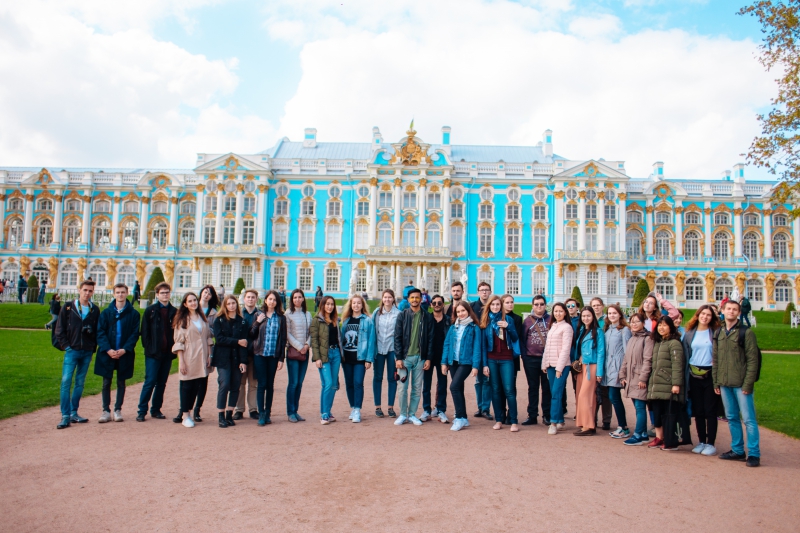 We got off the bus; the guide was ahead of us and we were all behind her. Upon arriving at the ticket office, the guide submitted all the IDs to the counter, but the lady officer inside that counter said that everyone should show their own ID themselves. Ultimately, we all showed our cards to her one by one, and then she gave us one ticket for all of us that our guide took in her hand, and then a little farther ahead we entered the main gate. When we entered into the main gate, on the left-hand side, we saw a map of Catherine park. When we went a little further, there was a queue of people for the entrance. The line was quite long. The guide kept telling us the history of the palace till we reached the gate.

Finally, we entered after security checking. There was another ticket counter on the left side of the entrance gate. Our guide bought tickets for the Amber Room from there. There was another checking counter when we entered the gate, cross, there was a room in which audio devices were being provided and we had to put shoe covers over our shoes. We also took the audio devices and covered the shoes. They were not allowed to go beyond this without their own guide, so our guide booked their official guide. When we entered the front door, the stairs were going up, as we went up the stairs, there were six red curtains on the top of the wall, and there were paintings on both sides of the wall. The official guide started talking, then we went a few steps upstairs and entered the left-hand side door. We saw a different luxurious scene inside that. Inside that there was a large hall full of decorations from floor to wall, from wall to roof, we didn’t see any such a little place without decoration, guide was telling us everything with details about the Amber Room’s history.

The Amber Room was originally constructed in the 18th century and disappeared during World War II and was restored in 2003 which began reconstruction in 1979, the work was completed after 25 years and marked the 300-year anniversary of Saint Petersburg. We walked straight ahead, there was one room after another and each room was pulling towards itself. We went to the last room and then came back. We returned back to the place where the stairs had entered the left-hand door. Now there is another door on the right-hand side, and we entered, we saw also a line of rooms and each room was presenting their own art. In one room there was an old wall clock and it was shown, their presence after every second. There was a dining table and chairs were placed around that dining table in one room. And we saw some fruit on a small table nearby. Well, after we saw all this, we came back to pick up our coats and stuff and left the Amber Room. When we came out from the building and walked a little further away, there was a great view outside.

On that day the weather was so lovely, there were clouds over the sky. The temperature was good, not too hot and not too cold. We went ahead and captured group photos. On the shore of the lake, there were some benches and people was sitting there and capturing photos. There were also some memorable buildings along the lake.

After all that, we decided to return back to the bus. There were small shops from our both sides when we leave the Catherine palace. Tourists come there and buy some stuff from here and say that we brought it from Catherine… WAAOOO… We walked a little while the bus was parked. We boarded the bus and started to see the city. It was a small but very smart town. There were big roads, clean houses, parks for children to play, and even footpaths for people to walk. It was lunch time, so we stopped by a nearby restaurant. I didn’t remember the name of that restaurant, but there were two stone tigers on the outside of the main gate of the restaurant. The restaurant had both inside and outside decoration, the cleanliness, quality of food, behavior of staff, everything was all admirable. After lunch we boarded on the bus and arrived in Saint Petersburg about an hour later.