The Grounding exhibition project has been open since September 8 at two locations: Dokuchaev Central Soil Museum and Art.ITMO.Residency. It was designed and curated by graduates of the Arts & Science Master’s program and 19 artists from eight countries and five Russian cities contributed to it. The project is a part of the Ars Electronica international art and technology festival and has been nominated for the Innovation award. 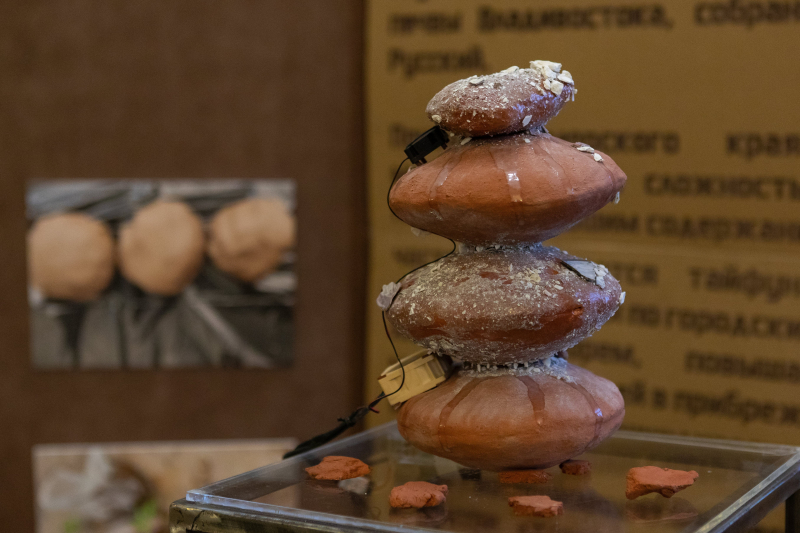 The exhibition was curated by Victoria Gopka, Asya Kaplan, and Grigory Kirgizov. They started to work on it during their studies at the Art & Science Master’s program.

The educational part of the project took place last year as an online conference Beneath the Pavement, Not the Beach in which Russian and international researchers, philosophers, curators, and artists took part.

The current exhibition was organized together with the Central Soil Museum and supported by Ars Electronica, a major festival of technological art held annually since 1979 in Linz, Austria, and now worldwide.

ITMO University is collaborating with the festival for the second time – last year, the Pangardenia exhibition took place at Art.ITMO.Residency. According to Christl Baur, head of the festival, the internationalization of the event was initially a necessary measure caused by the pandemic but the experiment went well and now they plan to continue collaborating with venues all over the world, including Russia.

“I found out about ITMO University a long time ago; it’s quite well-known both in Russia and globally. I’m really glad that it’s our partner and I hope that our partnership will develop further,” says she.

The project has received financial support from the endowment foundation of ITMO University and Raiffeisenbank and was co-organized by the Austrian Cultural Forum in Moscow. According to Darina Khokhlushina, Deputy Director of Raiffeisenbank’s North-West Retail Center for Retail Business, the problem of ecology is very important for the bank and it has many initiatives that aim to solve environmental challenges, as well as support contemporary art.

“Raiffeisenbank actively supports projects that help create a joint cultural environment between Russia and Austria. The Austrian Cultural Forum Moscow helps us choose them by providing their expertise. The topic of the exhibition is unconventional, which makes it hard to miss. This cultural project creates a new context and makes us rethink everyday things that we take for granted and don’t appreciate,” says Darina Khokhlushina.

The main topic of the project is soil – a substance without which we can’t exist but also don’t value. The main idea is to take a new look at the soil and try to feel and understand it.

“We are closely connected to nature but at the same time, it constantly gets overlooked. Soil is the most underestimated, even marginalized part of nature. While we can feel empathy towards animals and plants, we often associate soil with dirt. At the same time, we actively use it as a resource: we eat the plants that have grown on it and use technologies created on the basis of metals that are found underground. Our attitude is exclusively consumerist: we squeeze resources out of the soil, but in return we don't even give it sympathy. In our project, we are trying to show this seemingly boring, unpleasant object from an unexpected side: we invite visitors to approach the soil, listen to it, sniff it, taste it – and think about how we can take care of it,” explains Victoria Gopka, a curator of the project.

There was an international open call for projects, as a result of which more than 150 applications have been received. A total of 19 participants were chosen for the exhibition, including Karine Bonneval (France) with the Listen to the Soil project, Masharu (Netherlands), creator of the Museum of Edible Earth, Anastasya Kizilova (St. Petersburg), author of the Postcompost project, and many more. Several students of the Art & Science Master’s program also took part: Kseniia Gorlanova, Uliana Lyubenova, Anton Shchegolev, Kseniia Bakhtina, and Roman Smirnov.

All the projects are about the role of ground and soil in our lives, as well as the harm that’s been done on them during the Anthropocene. For example, Anastasya Kizilova in her Postcompost project illustrates how people contaminate nature with plastic and how this process changes natural microbiological processes.

Yulia Vergazona and Nikolai Ulianov (Germany) focus on the way we interact with the ground by stepping on it in our shoes. The authors suggest using interface design methods to find the optimal configuration of the soles that would consider individual properties of various types of soil. At the exhibition, you can see prototypes of such soles created using machine learning and 3D printing.

Artist and researcher Anastasia Mleko (Moscow) has designed a special map that includes basic natural science ideas and concepts on the consumer and exploitative way of treating nature. She also suggested an alternative scenario that would take into consideration modern science, ethics, and eco-friendly thinking.

Several projects were focused on a more attentive attitude to the soil. Karine Bonneval allows visitors to listen to the sound of soils recorded with contact microphones in France, Germany, and Sri Lanka; Liliya Akivenson and Evgenii Savenko consider a rare mysterious phenomenon called the hum of the earth, Greg Orrom Swan has encapsulated the scent of soil, and Masharu, a Dutch-Russian artist have displayed samples from their Museum of Edible Earth that you can taste.

Egor Astapchenko talks about the practice of building cellars in chalk cliffs.

“My project is tightly related to the localities of the Voronezh region. At its south, there’s a natural reserve Divnogorye – a very important place for local people and artists. Each building there has a cellar called an “exit” embedded in a cliff. When I heard this word for the first time, I thought – “Where does this exit lead?” I’ve imagined a person going underground to see an endless shimmering horizon – a place free from routine and daily problems. These chalk exits remind me of sacred architecture, given that nearby, there are similar churches and monasteries also built in cliffs. The sad thing is, all people who used to construct such exits are dead and this skill is lost,” says he.

How to visit the Grounding

The exhibition is supplemented by a cultural program: in September and October, several performances, lectures, workshops, and other events will take place at various locations. Entrance to the exhibition and most events is free but some of the latter require registration. You can follow the news on the Grounding website and Air.ITMO.Residency Instagram profile.

The exhibition is open until October 18 daily from 12 pm to 8 pm (Monday and Tuesday are days off) at two locations: Dokuchaev Central Soil Museum (Birzhevoi Proezd, 6) and Art.ITMO.Residency (Birzhevaya Liniya, 16). On weekends, the exhibition is supplemented by art mediations at 3 and 7 pm.