CYFEST at ITMO’s AIR Space: Who Are You, and Who Am I?

CYFEST is one of the largest contemporary art festivals in Eastern Europe and has been held annually for the past 13 years. This time, St. Petersburg’s exhibition spaces will present complex installations and video- and technological art created with AI, computer vision, and more. Art.ITMO.Residency (AIR), ITMO’s exhibition space, is debuting as the festival’s main location hosting the Who are you, and who am I? exhibition on November 11-23. Read on to learn all about the main exhibits. 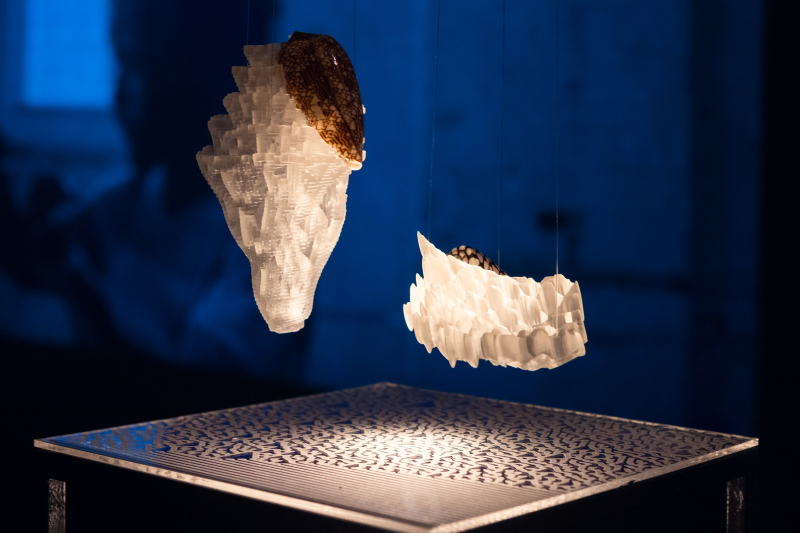 Over 70 artists from 17 countries exhibit their works at CYFEST this year. Among them are: Anton Vidokle, curator, artist, participant of Documenta 13 and the 56th Venice Biennale, and founder and editor-in-chief of the e-flux magazine; Where Dogs Run, an art group that pioneered Russian science art; Boris Shershenkov, sound artist and instrument designer; Rebecca Merlic, an Austrian artist and participant of Ars Electronica festival; Emilio Vavarella, an Italian interdisciplinary artist; Hans Tammen, a New York-based experimental musician; and others.

The event program features not only exhibitions at AIR, the St. Petersburg Stieglitz State Academy of Art and Design, St. Anne's Church (Annenkirche), LUDA Gallery, and Borey Art Center, but also screenings at the General Staff Building (the State Hermitage Museum), sound performances, as well as artist talks and lectures.

This year’s topic is Cosmos and Chaos – these concepts are seen through the lens of contemporary technologies, as well as the burgeoning information and media environment. For instance, artists ponder on the issues of transplanting the technological into the human and the interaction between these two fields.

This is the first time that Art.ITMO.Residency received the honor of being one of the festival’s key locations and exhibiting 12 works by artists from Russia, the USA, and Europe, including creations by four students and graduates of ITMO’s Art & Science Master’s program. The students’ works were chosen through an open call held by CYLAND Media Art Lab, the main organizer of the festival.

Winners of the open call – organized specifically for students of ITMO University, the School of Young Artists of the PRO ARTE Foundation, and the St. Petersburg Stieglitz State Academy of Art and Design – got the chance to not only exhibit their works and receive support for their projects, but were also granted a full year of classes by CYLAND experts – video and sound artists, engineers, and others.

Several of ITMO’s students won the call. Grigory Kirgizov, a graduate of the Art & Science program, submitted The Source of Form, a sculpture modelled from patterns produced by an elementary cellular automaton (Stephen Wolfram’s Rule 30). Alexander Pogrebnyak and Anton Shchegolev, students of the program, created a media installation made from oscillographs and sound fragments, some of which were made by a neural network. Galina Alferova, another student of the program, and Semyon Koltsov, a PhD student at ITMO’s ChemBio cluster, visualized the Lorenz attractor – one of the mathematical models for chaos that gave the world the famous butterfly effect.

We asked the artists and curators of the project about the process of contemplating chaos through media technologies and creating their works.

artist and curator at CYFEST

We’ve always said that our festival is for young artists and the art we exhibit is in-demand on the global scale. That’s why we are very happy to have held a full year of classes with students of ITMO and PRO ARTE. We introduced them to our lab and gave them the opportunity to master specialized software with the help of our curators and engineers.

CYFEST is not just about art & science, as the visual aspect of the exhibits is really important here. And both ITMO and PRO ARTE have their unique traits, too. At PRO ARTE, you’ll usually find classically trained young artists who were curious to learn more about techniques and technologies. ITMO students, on the other hand, already have a good technological and scientific background but have some issues with visualization and aesthetics. And our mission is to broadcast tech art but in a more traditional form – through visual stories rooted in emotion.

We chose the best out of the projects created for CYFEST and supported them technologically and financially. As a result, the festival features seven student projects and we are very happy that our collaboration with ITMO bore the fruit of a joint exhibition at the AIR gallery that suits this kind of art wonderfully. The space has audio equipment, projectors, and, most importantly, people who understand and love contemporary art. It’s a rare combination for our city.

We made the project High Sensitivity with Semyon Koltsov, who is a PhD student in chemistry at ITMO. It’s a visualization of the Lorenz attractor, a mathematical model created by Edward Lorenz to describe the movement of gas and liquid particles in convection. The resulting graph resembles the wings of a butterfly; it stays within certain boundaries but is completely disordered inside them.

Lorenz arrived at two conclusions. First of all, chaos can occur in instances when everything is seemingly determined. Second, there is an order hidden in this chaos, and this order is complex, delicate, and hidden in the haphazard flow of information, which makes it even more interesting.

Lorenz wanted to predict the weather with a computer model. He chose the equations that described the connection between the variables (temperature, atmospheric pressure, and wind velocity at a given moment). The model was completely deterministic.

Later, he decided to look at the plot for one variable – you would think that the plot would be the same all the time, but Lorenz discovered that the reproduced plot was only identical to the first one at the start and then became completely different. He later discovered that his computer stored the variables accurately to six decimal places, but they were printed with accuracy to three decimal places. The system turned out to be exceptionally sensitive to the slightest changes.

To illustrate this, Lorenz used to say that if the weather is truly such a sensitive system, then a flap of a gull’s wings can cause significant changes in the weather. Later the gull became a butterfly and in 1972 a paper titled Does the flap of a butterfly’s wings in Brazil set off a tornado in Texas? was published, coining the term the butterfly effect.

Our installation is made up of 700 bismuth crystals, and bismuth is a metal that self-organizes in crystallization. Together with Semyon, we melted the metal and then, as it cooled down, inserted copper wires into the liquid to serve as crystallization centers.

Break-in, our media installation, is a study of chaos in information. The information environment around us grows as the number of senders and recipients increases, and it acquires its own features, individuality, and starts to reach out to us in a way. Our visitors become researchers who listen and watch for what this environment has to say and then try to unravel if there is any link between its creations.

Our main medium is sound – it creates the narrative and is responsible for the visuals. We use sound to draw pictures on oscillographs, which are usually used to measure electrical current and voltage. We mix audio samples, such as police and fire service chatter, people’s stories, as well as stories created and voiced over by neural networks. So one of the tasks for our visitors is to deduce the real conversations from the simulated ones.

Each oscillograph is a standalone project, but some events – like the blinking light bulb above them – are synchronized. This means that three people working together will be able to piece it all together and “understand” the environment at the center of our project.

The idea is that the information space is expanding and getting more complex, essentially turning into a chaotic world. Under certain conditions, you can break into it and try to understand what you experience, hence the name Break-in.

The name of my installation is Laboratory X. The “X” stands for “secret.” It’s a mockumentary about a lab that has developed a virus and then broadcasted it in the form of media images onto our gadgets.

The project is about conspiracy theories and is based on the logic behind many such theories. I reproduce it in an absurd way and leave space for visitors to interpret what they see. For instance, Gwen Stefani used to wear braids that resemble the shape of the virus – it means that she was already broadcasting its image 20 years ago, making people susceptible to the virus.

I was inspired by videos on YouTube, OK Live, and various TV shows, so essentially the way we work with information. There is a video on YouTube claiming that coronavirus was created by Donald Trump because he used to sponsor beauty contests where a crown (or corona in Latin) was the main prize.

These theories aim to explain our complex world in a simple way, to turn chaos into cosmos (in the primary sense of the word) if we use the terms of CYFEST.

I assembled the project with the help of CYLAND’s engineers, who helped me set up the videos and projections, upload them so that they could work autonomously, and make the project look like it originally did in my head.

You can visit CYFEST’s lectures and events on November 11-28, and the exhibition at ITMO’s AIR space will be open until November 23 daily (except Mondays) at 12-9 pm (you will need a vaccination QR code to attend). Check out the fest’s program here.