On July 16-17, ITMO hosted (Non-)Conference, an annual conference on evidence-based medicine, ethics, and social issues. The event is part of the non-profit educational project Doc2Doc and brought together over 400 medical specialists from all over the country. Learn more about this year’s topics and format in our article. 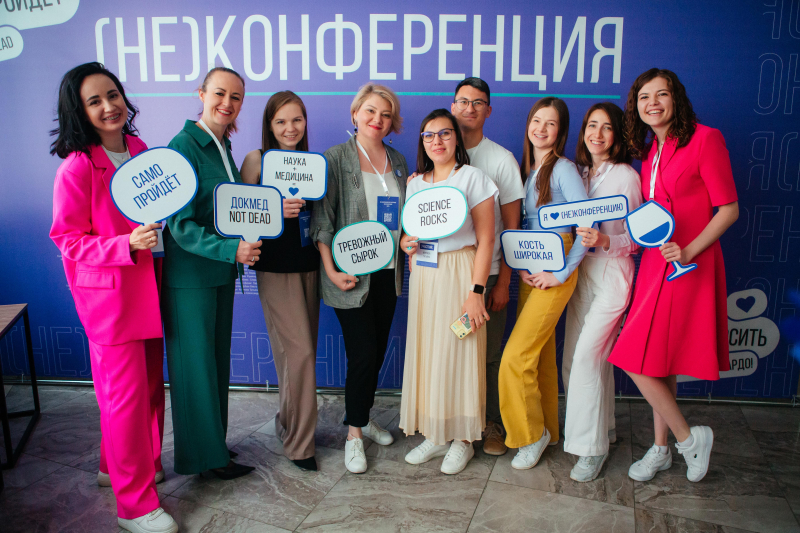 (Non-)Conference 2022 at ITMO University. Photo courtesy of the event team

(Non-)Conference is an event for clinicians and everyone interested in evidence-based medicine, high-quality healthcare, and efficient doctor-patient communication. The event was created by rheumatologist Olga Loskutova. It now runs under the aegis of Doc2Doc, a non-profit educational project, supported by Lahta Clinic, ITMO University, 1MED.TV, and other partners. (Non-)Conference was launched for medical specialists who want to share their knowledge and experience in various formats, including lectures, broadcasts, articles, translations, and communication.

The first (Non-)Conference took place in the summer of 2021 and since then has been held annually. Its main distinctive feature is the absence of tiresome monotonous lectures – instead, participants discuss their professional cases as equals, regardless of their credentials. This way, the conference provides them with an opportunity to openly discuss the most relevant issues in healthcare, such as working with complex clinical cases, receiving additional training, or overcoming professional burnout. Additionally, the organizers hosted a clinical cases contest, the winners of which received all-expenses-paid vouchers to attend the conference. They got to share their unconventional approaches to such cases as Mediterranean fever, fibrodysplasia ossificans progressiva, or anorectal malformation with limited resources available at regional hospitals.

All in all, the conference included over 20 lectures, discussions, and workshops, with more than 80 invited speakers, such as evidence-based medicine communicators, pediatricians, and others. Among the participants were over 400 clinicians from all over the country, including from Moscow, St. Petersburg, Samara, Novosibirsk, and many more. A part of the proceeds from the event was donated to... to social initiatives, such as the “47 In” football club for people with Down syndrome, the Prostye Veschi inclusive project, and the Anna Helps project, which supports graduates of foster homes in their transition to adulthood.

Just as it did last year, the conference took place at ITMO University; among the event’s speakers were its Master’s students and staff members. For instance, Anatoly Shaulsky, a lecturer at the university and a former psychotherapist, held a workshop on professional burnout for medical specialists. The participants also visited some of the university’s laboratories. At the Infochemistry Scientific Center, they learned about chemical computers: what they are, how they’re made, and where they’re used. At the Faculty of Physics, they explored the radiophysics laboratory and made themselves familiar with the applied medical projects developed by researchers from ITMO. At the Faculty of Biotechnologies, the event’s guests found out all about the projects focused on functional foods and quality control.

As the staff of Lahta Clinic note, the company has collaborated with ITMO for years and plans to develop more joint projects in the future.

“The university’s values resemble ours. ITMO is like a university from the movies that we clinicians never got to attend, so we want to show our audience that there is a different kind of medicine and a different kind of education. Of all the students accepted into the first run of the Public Health Sciences Master’s program at ITMO, 30% are Lahta Clinic employees. Driven doctors at a driven university in a program that, perhaps, will change medicine for the better. We’ve launched a joint study and are developing new ones. And, naturally, we enjoy knowing that we’re heard, that our ideas are accepted, and that we have the ability to share with the general public the things we can’t relay through medical universities. We would love to do another (Non-)Conference (and then another) as well as continue developing the field of clinical research,” comments Ksenia Solovyeva, an organizer of (Non-)Conference, endocrinologist, and general practitioner.

Daria Denisova, the head of ITMO University’s Center for Science Communication, added that, while (Non-)Conference regularly brings together the leading opinion makers and medical experts from all around the country, the event is also a good opportunity to discuss research ideas with peers from different fields.

“It was important for us to hear from not only doctors, but also social scientists and representatives of charity organizations; to talk about complex issues and be clear about them. Humanity and empathy, the ability to openly discuss any problem – this is the framework of this community, and we can relate to that. When we were developing the Public Health Sciences program, we expected clinicians to be the first to appreciate its relevance. That is, on the whole, exactly how it went: our Master’s students are accomplished medical specialists and we’re happy to talk with them about research and educational projects. Not long ago, we got to thinking about the things that medicine and education have in common. It appears that, just as the focus in medicine is shifting towards the needs and values of each patient, so does education become more student-oriented,” she comments.