“Formula for Science PR 3.0”: SciComm for the Modern Society

How does scientific knowledge manage to survive in a distrustful society? What should science journalists do in the post-truth era? How is science communicated in Germany, Italy and Russia? Can science and business finally be friends? The “Formula for Science PR 3.0”, a newly assembled collection of practices and expert opinions in the field of Science Communication, answers all these questions and more. The “Communication Lab” project of the Russian Venture Company (RVC) publishes the only handbook on Science Communication in Russia. Its third edition was developed by ITMO University’s Center for Science Communication: more than 20 experts working in science popularization in Russia and abroad were invited to take part. 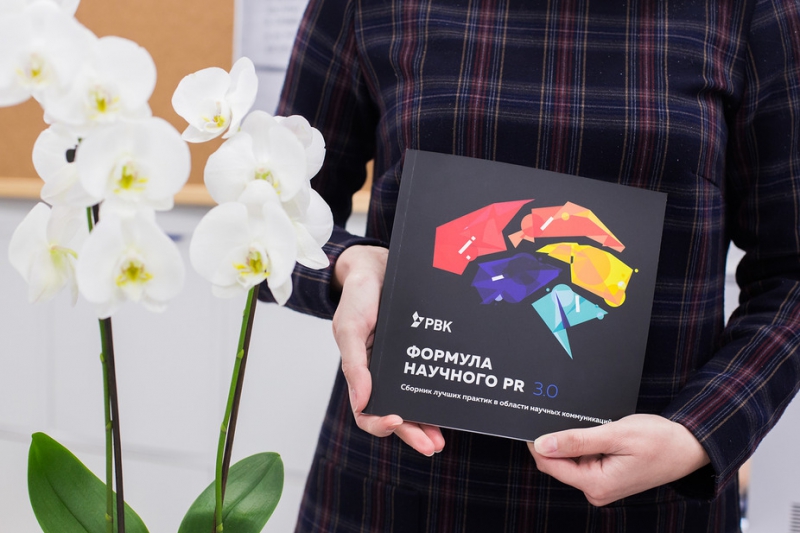 The “Formula for Scientific PR” — is a collection of best practices in the area of Science Communication. It is issued by the “Communication Lab” — an RVC project aimed at consolidating and further professionalizing science communication in Russia. The first edition was released in 2014 — when the Russian community of science communicators had only begun to form. In the book, experts and specialists who have just begun working in SciComm share their stories of failure and success. The new 2017 edition was prepared by the Center for Science Communication of ITMO University. Among those invited to participate were specialists from: the AKSON Association, Indicator, HSE University, Beauty Science, PostNauka, Clarivate Analytics and Future Biotech companies, The Cancer Prevention Fund, the Science Slam Russia community — more than 20 science journalists, communicators and scientists, “Communication Lab” experts, as well as ITMO University Master’s students specializing in Science Communication whose work has already been published in a number of sources.

Head of the RVC Innovation Support Department Natalya Smelkova, who has been leading the project for many years, mentions that the third edition of the “Formula” is more “mature” than the first one. The book aims not only to combine SciComm theory with real practice cases, but to generalize and outline where it is that Science Communication stands today.

“The first edition was put together bit-by-bit. Three years ago, there just weren’t so many Russian experts able to share an opinion or experience. Back then, the community was only beginning to form. And there was no theory. By the time of the second edition, the topic had been somewhat developed by participants of the “Communication Lab” project Lena Brandt, Sasha Borisova, Dima Malkov and others. Some theory had appeared, but this time we felt a notable lack of information on practices; we were still able to collect a series of cases for the book. The third book is a “mature” edition. It conveys the fact that Russian Science Communication is actually catching up to the global context. Most article topics match with those that headline globally: post-truth, trust in expert analysis, ethics, the future of science journalism,” – comments Ms. Smelkova. The book consists of eight large chapters. Olga Dobrovidova, a science journalist and Matthew Shipman, Research Communication Lead at North Carolina State University, research journalist and author of the “Handbook for Science Public Information Officers” discuss the future prospects of Science Communication. Whereas Peter Broks, Professor of the Rhein-Waal University (Germany) and Andrey Kozhanov, Deputy Dean of the Department of Sociology at the Higher School of Economics speak of the challenges that distrust in society poses to scientific knowledge.

In addition to global trends analysis, the authors also focus on the analytics that are present in Science Communication.

“We pay close attention to scientometrics, the aspects of scientific work that are tangible and can be represented by numbers. That is why we speak of data and ways of using it. This way, Science Communication won’t appear abstract, but could actually rely on numbers. This issue is considered in detail within our current research for RVC,” – says Daria Denisova, the book’s editor and PR Manager of Science Communication and Outreach at ITMO University. Pavel Kasyanov, scientometrics specialist at Clarivate Analytics, writes about popular research, trend forecasting in science and the objectivity in use of altmetrics. In a column by Konstantin Fursov, Research Associate at the Institute for Statistical Studies and Economics of Knowledge at the Higher School of Economics, explains why we need to survey public opinion on science and technology and what benefits those surveys provide.

According to Ms. Denisova, even though the book presents numerous cases and experts’ practical advice, its audience will not be limited to science communicators and journalists.

“The book is less of a manual and more of a tool for self-reflection,” – she comments – “That is why I recommend it not only to those who work in Science Communication, but also to people who are simply involved in making decisions. We describe how Science Communication works, what to use it for, and why it sometimes fails. By spanning all these topics, we expand the book’s audience. We address not only methods to improve KPI, but also ways to recognize the global goal; for that reason the book will also be of interest, for example, to those involved in projects dealing with communication in knowledge-intensive business”.

As Natalya Semenova notes, the book should become a good beginner’s guide to Science Communication.

“The book definitely does not cover all topics that interest the community. But it is like the end of a yarn ball. Pulling on it and reading further, you dive deeper into Science Communication. And pretty soon you might find yourself reading the “Handbook of Public Communication of Science and Technology” by Bucchi and Trench,” – she says.

Only 200 prints of the book will be made, although a free electronic version is available for downloading at the “Communication Lab” website.