Science communication is new to Russia, both as a concept and as a career field. Yet in just a few years a community of experts on the matter has formed here, and they are ready to start making science accessible to the larger society. Why does it matter? What are the main difficulties of this task? How can you innovate science communication? These are some of the questions that were asked at the launch of the new “Formula for Science PR 3.0” handbook – a collection of practices and expert opinions. The Moscow event was organized by Russian Venture Company’s Communication Lab, ITMO University and Association for Communication in Education and Science (AKSON) 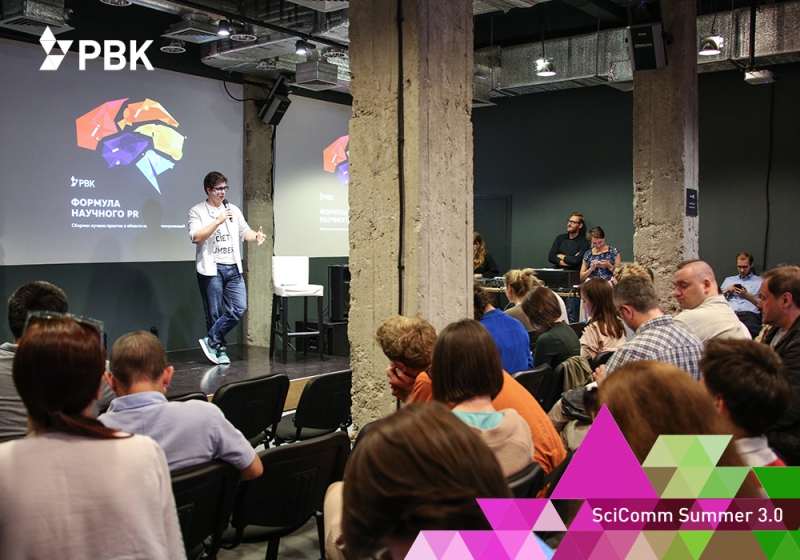 The first “Formula for Science PR” handbook was released in 2014, back when science communication in Russia was still in its infancy. It contained SciComm experts’ stories of their failures and successes. 2017’s edition was edited by ITMO University’s Science Communication Center. This is the third edition and is much more mature; it shows that the field of science communication in Russia has gradually caught up to the global advancements in the field, says Natalya Smelkova, RVC’s Head of Media Development. The main topics of the book are the same that are the most relevant in the global community right now: post-truth, trust in expert opinions, ethics and the future of science journalism.

First and foremost, the scientists. And it’s not just about their selfless desire to share their discoveries, enlighten and educate the public. The simple reason for this is that these days large European grants like, for instance, Horizon 2020, require their applicants to make their work accessible to the public and inform them on it.

The European practice actually encourages scientists to work not as much with the press as with the people – those who live near research institutions, for example. This was noted by Alexandra Borisova, co-founder of the Association for Communication in Education and Science (AKSON) and a visiting researcher at Rhine-Waal University (Germany). Why is that? Well, because universities, research institutes and medical centers always serve as growth drivers in their neighborhoods in regard to infrastructure and innovative environment. Local children can learn from renowned scientists, while their parents can work in major organizations sponsored by the government and private investors. The society needs SciComm to serve as a decision support system in politics and economy. By speaking out in support of this or that research, society not only facilitates their development, but helps turn politicians and other authority figures’ attention to the results of that research. If people are interested in certain technology or scientific data, such as, say, the effect of air pollution in major cities on oncological illness, this will result in relevant research projects being picked up by the state or private investors. And if it does turn out that air composition and illnesses are affected by certain factors, the authorities can begin to eliminate them, applying their political influence in alignment with the scientific knowledge.

This might raise the question: just how much can the public be an expert on a certain issue? Some groups, like ecologists, for example, will be in favor of installing new filtration systems at factories; yet entrepreneurs may not like such a development. With whom will science communicators side? After all, both sides can hire PR-experts to promote their vision of the situation.

This is where academic science and academic SciComm must do their part. State-funded universities and research centers need to serve as independent experts with no stake in a conflict, emphasized Ms. Borisova. Of course, universities can accept research requests from private companies, but the sources of finance should not be hidden.

“But, of course, this is the ideal situation; in the end, nothing stopped Trump from leaving the Paris Climate Accord. What should scientists do if they think that their discoveries matter and need to be seen by the decision-makers? They should go to the public. One of the main trends in sci-tech politics of Europe and USA and a number of other developing countries is to stop involving the society in a scientific question right near the end when all they can do is, basically, say if they’re “for” or “against” some research. These days, they are  trying to involve the public in determining the research topic itself,” – comments Sergey Kolesnikov.

Sergey was among the original staff of Communication Lab’s project team. A graduate of a Master’s program on science and technology policy at Georgia Technical University, Mr. Kolesnikov will soon begin work on his postgraduate studies in scientometrics and public relations at Arizona State University. Another issue is that science communication is a relatively young field of study in both Russia and Europe. According to Alexandra Borisova, SciComm has been around in Europe for 25 years – five times longer than in Russia. But even that amount of time is very short for a science, not to mention that the professional community has no one to learn from and have to develop their trade through trial and error.

“It’s not a problem to find a press secretary for a scientific organization; yet it’s a challenge finding a professor who can teach science communication at a university. My university, for example, has a Bachelor’s degree program in science communication, which is supposed to be supervised by two professors and they’ve spent a few years now looking for a second professor. After all, the right person for the job would need to have the right education, teaching experience and field experience, too,” – she explains.

One more issue is that both science and their communicators don’t always bring the kind of news that the public wants to hear. Science journalists often write about the results of some new research. Maybe someone has discovered new properties of graphene, for instance. Indeed, scientists and science enthusiasts will find that interesting. But the laymen, so to say, care about other things. They are particularly interested in conflicts, says Ivan Bushmarinov, analyst for Yandex. That means that SciComm specialists should look for discoveries that either prove something that couldn’t be proven by others or ones that debunk previous theories and facts.

Where would one get such information? They can ask the scientists themselves: “what research in your field has been recently disproven? What has been the talk of the month?” They can track blogs of scientific journals like Science, or follow scientists on Twitter, where most hot topics tend to be discussed with great vigor. Another great source are the so-called technical comments: scientists’ feedback on each other’s publications, which can be found in the aforementioned Science, for instance. The second kind of “tasty” news for the mass audience is the kind that describes not the end goal, but the methods, meaning that people are often interested in hearing about the scientific process, how discoveries happen and how modern technologies work.

Ms. Borisova also brought up the issue related to the difficulty of gauging the effectiveness of pop-science events and science communication in general and gave the audience an example. A zoo had conducted an open day to, as stated in the official statement, help children learn about the planet’s biological diversity. To see just how well the goals were accomplished, researchers tested the kids’ knowledge before and after their visit to the zoo. Turns out that their knowledge did not improve; instead, more kids had now wanted this or that animal as a pet.

The example shows that SciComm doesn’t always employ objective data to evaluate the effectiveness of communication events. This is why the concept of evidence-based SciComm is becoming more popular right now; it is based on the idea of basing strategies on clear data and indicates that the field has developed to the point where it strives to fact-check itself and move to a new level.

At the launch event, speakers described many successful practices, such as: the launch of the first Master’s program in science communication at ITMO University, the founding of the “Schrödinger’s Cat” magazine, the creation of Communication Lab and AKSON, etc. But it appears that science communication is starting to experiment with its boundaries. For example, ecologist and hydrobiologist Artyom Akshintsev has organized the popular-science tour company Russian Travel Geek. The project’s main concept is that scientists can assemble groups of tourists to accompany them into a scientific expedition. Scientists tells tourists about their work, the places that the group visits and may even let the members help in gathering samples or observing. In turn, the participants help fund the expedition. The result is that the scientists have the resources they need to travel and the tourists acquire new knowledge and experience.

“The problem is that many scientists don’t believe that anyone could be interested in their work. Yet there are people now who are ready not only to pose in front of a pretty rock, but to help take samples and find out why it’s important. People don’t want to just aimlessly follow a map anymore; they want to make a contribution. This is why we really need scientists who are ready to go on such tours, to do research and popularize it at the same time. People tend to think of scientists as people in lab coats; we try to show that scientists can be cool, too. This is especially important to the younger researchers: they need to feel that their work matters and interests people,” – comments Mr. Akshintsev.

One can’t simply join a tour with Artyom or some other scientist: since the trail often takes them through wild terrain, the participants need to be in good shape physically and mentally. The applicants also must submit a form so the organizers can determine the size of a group in advance.

Short science-themed videos are becoming more and more popular on YouTube and other video services. This is the format that is the most accessible way for the public to learn about science, says Vladislav Goncharuk, main editor of the YouTube channel and website Sci-One. Vladislav has experience working on TV, but, he says, that was of little use when moving into pop-sci video content. At the event, he spoke about the main aspects that define video content and how it is spread on social media. First of all, one needs to understand that the main audience of such content in Russia amounts to approximately 30 million people – the number of people aged 14 to 30. In this case, a video that only has five thousand views can’t be considered successful. Secondly, one shouldn’t think that social media offers unlimited reach in terms of audience. Users exist in information bubbles and only see content from the channels they’re already subscribed to. Thirdly, if a video goes viral it will spread on its own, which is why this should be the main goal. In addition, the online format allows the content creator to receive instant feedback from the viewers and fix their mistakes in their next video. But the main focus should be on understanding the habits and specifics of one’s viewers so as to properly “package” one’s content. It might not be as fascinating as the discovery of gravitational waves, but, if presented in a fun and entertaining manner, it will be watched and “liked”. And this principle applies to all spheres of science communication.