Julian Siddle, a BBC science journalist and the producer for BBC World Service and BBC Radio, has given a series of talks at Central Exhibition Hall Manege and ITMO University as part of the UK-Russia Year of Science and Education 2017. Speaking to the audience, he discussed the ways to explain gravity waves to children, why major discoveries often begin with the simplest questions and whether scientific content can compete with the social media’s top vloggers. 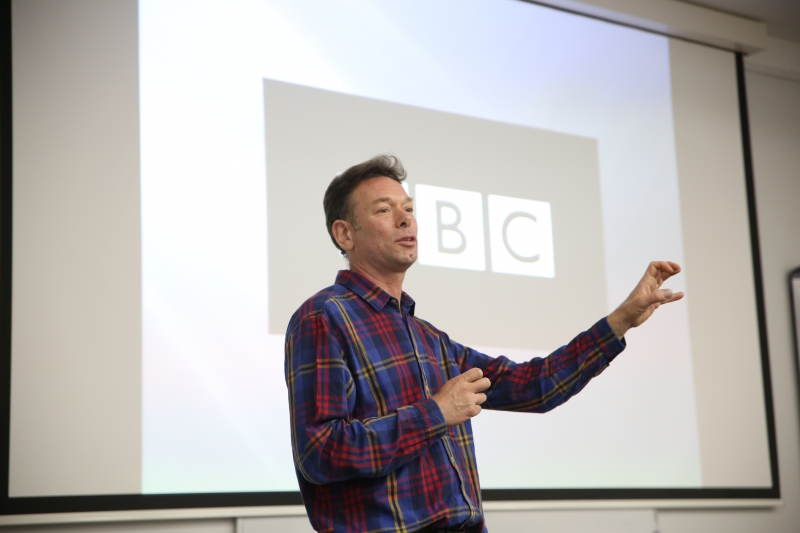 Back in the 60’s, Peter Higgs had proposed the existence of a particle that was long considered the “missing link” in the Standard Model of physics. Simply put, it was the one thing scientists needed to finally explain the origins of the Universe. Half a century later, scientists finally announced that the Higgs Boson particle had been found. Meanwhile, journalists and science communicators faced a challenge: how to explain to millions of regular people what this “God particle” is all about and why this discovery is among the biggest in scientific history, all in a span of a few minutes of airtime.

Over the course of his career, Julian Siddle has personally developed and implemented several of the BBC’s scientific projects – from a weekly program about science in Uganda to a documentary series about global digital communications in Asia and Latin America. These days, he produces scientific documentary films for BBC World Service, conducts science communication trainings and manages BBC’s social engagement strategy regarding science on Facebook and Twitter.

As Mr. Siddle points out, in recent times social media has offered the most opportunities in terms of proliferation of scientific content and capturing new audiences. Facebook alone is used by approximately two billion users each month – almost a third of the Earth’s population. But is it possible to interest millions in a new program of the European Space Agency (ESA) and can videos about science compete with popular vloggers?

One of BBC Science’s most successful projects on Facebook made use of British astronaut Tim Peake. Peake went to space as part of an ESA program and was the first British astronaut to participate in a spacewalk. But his expedition became a point of interest for users long before that historic achievement – the reason for that was a media campaign launched on social media in collaboration with ESA. For several months Peake became, in a way, the host of his own program: travelling around Star City with a camera in his hand, he enlightened his viewers about astronauts’ everyday life on earth and even learned to speak Russian with BBC’s Russian-speaking experts.

“By using social media, we managed to attract a highly wide audience. We made a conscious decision to make Tim the host of the program, so that he would film everything himself and have a direct link to the viewers. We made about a dozen videos and posted them on Facebook before his flight. At first glance, it all might seem very un-scientific – Tim learns a language and talks about training and living in Star City. But it was this “light” approach that made the viewers interested. Tim’s friendly and open personality played a major role, too. After the campaign had become popular, we let him talk about science, as at that point we had already formed a space where we could make our next move,” – explains Siddle.

Tim Peake also agreed to take the camera with him up to the orbit, where he tackled more complex subjects, explained the functions of various devices onboard the ISS and conducted experiments. One of these experiments was done in cooperation with Britain’s schools: the astronaut took seeds to space with him, promising he’d send them back to the schools to have them planted next to regular seeds that had never left the planet.

But sometimes even a spontaneously posted video without a carefully planned media campaign can end up getting 18 million views in a week. This is exactly what happened with one of BBC Science’s most popular videos on Facebook. A short time-lapse video with no sound demonstrated how a fish corpse decomposes on the ocean floor. The video was shot for a research project and sent in to the editorial offices by one of the project’s authors. Not the scientist nor even the BBC staff could predict just how popular the video would become. So what is the secret of such sudden success?

“We asked ourselves more than once: how did that happen? I think the “yuck factor” played a role. It is one of many factors of success on social media: people tend to share things that disgust them. And, as far as I know, no one had done that on Facebook before. Finally, there is one other thing: it’s a simple story, it’s short and there are no words – therefore, no language barrier,” – notes Julian Siddle. Turn things inside out

One of the traditional sources of news for TV, radio and internet media are publications in scientific journals. There are certain rules and formats there, too – each article takes months, or even years, to write. Texts have a rigid structure and the most important things are found in the conclusion at the end. When covering a scientific story, one should turn the information “inside out”, says the BBC producer. Narrative is built on the basic journalistic principle of the “upside-down pyramid” – the biggest things should be in the very beginning. The first 20 seconds of your story should give viewers and listeners the answer to the main question: “What is the point of this?”

“First you talk about the discovery and its significance, and then you provide some context, some history, explain how it was done. For example, in a radio report based on research published by the Geological Society of London, the reporters first described the most important part – the 91 volcanoes that were found in the Antarctic below the ice sheet. Then they described its history: turns out the research sprung from a question asked by a student in Edinburgh who wondered what researchers these days know about volcanoes in the Antarctic. Scientists realized that this is indeed a topic that has not been well-researched and undertook the expedition that resulted in this discovery,” – says Siddle.

The journalists concluded their report with an analysis of future prospects – do scientists know what sort of impact these volcanoes may have on the destabilization of the Antarctic ice shelf? This universal structure allows them not only to adapt a complex subject for a wider audience, but to also add some context to it, which, too, makes the material more accessible and interesting for an audience that is not familiar with the subject.

Can science news include reports about natural disasters and crime stats? Science-related content doesn’t come only from research and studies – journalists have often found cause for scientific analysis in seemingly unrelated topics. In 2005 south US was hit by one of the worst storms in its history, Katrina. The city of New Orleans had it worst, with more than 80% of the city’s area ending up underwater. The natural disaster took the lives of 1,836 people and its economic impact amounted to approximately $125 billion. The disaster and its consequences were analyzed in numerous studies and papers. Authors analyzed the reasons for the levee failures, the evacuation process, how the city’s institutions worked during the hurricane and the flood, and modeled the city’s development trajectories after the fact.

It’s easy for scientists to explain something like a hurricane, but how do you talk about “hard science” in simple terms? Can one explain the Higgs Boson in a couple of minutes?

“Even Peter Higgs himself had difficulty explaining to people the nature of this particle that was later given his name. Indeed, we often face the fact that it is hard to explain some things that, however, greatly interest the public. A few years ago, when the Higgs Boson was discovered, it was a real challenge for us to sum it up and try to explain the gist of it in just 30 seconds,” – he explains.

According to the Higgs mechanism, the Universe is threaded by a field – the Higgs field, which allows particles to have mass. It is assumed that interaction with the Higgs Boson particles that occur in this field is what gives moving elements mass. This process can be compared to a snowy field, through which one can’t easily walk since the snow sticks to their shoes. Everyday analogies often help explain complex concepts. This particular method was used by theoretical physicist John Ellis when he tried to explain one of the biggest discoveries in the history of science.

Science can be personal

“It was also very difficult to explain to the public what gravity waves are when they were first discovered. Still, despite the complexity of this subject, it was of great interest to the viewers. Why? I think it’s simple: what makes these discoveries fascinating is that they allow us to get a bit deeper in the nature of the processes that happen all around us, to understand our role in the Universe” – points out the expert.

But it’s not just intricate fundamental research that fascinates people – one other thing that makes people interested in popular science is the personal aspect. Any scientific topic can become the story of an individual, a family or a people.

Two years ago a picture of a six year-old girl from Liberia holding up a sign saying “Thank You Science!” became popular on social media. The picture was taken by the 23 year-old Alphanso Appleton, whose mother was infected with the Ebola virus, after he’d learned that a vaccine had been created to combat the virus that took the lives of tens of thousands people. He wanted to share his family’s story and express his gratitude to the scientists who developed the cure. He also shared that, thanks to the vaccine, he does not need to fear for his future and plans to get an education in the US and pursue a career as a photographer.

“The fight against Ebola is not just an example of successful scientific collaboration, but a good story in terms of coverage. This picture shows how science can change our lives. And, to expand on that thought, it’s hard not to remember that even ten years ago nobody could imagine we would be able to create a computer model of the human brain. But today, thanks to technological advancements, scientists all over the world work in this area and make discoveries. One of the biggest trends in recent years is the development of information technologies in biological research. The ability to process humongous amounts of data about our cells is, I think, one of the things that will have a huge effect on our future,” – says Julian Siddle. It’s unlikely that one would be able to plan the structure and create the recipe for the perfect scientific program, material or media campaign in just five minutes. Still, these five basic principles, explains Siddle, may help you identify the most important things if you’re just beginning to create your own content.

Julian Siddle’s talks were a part of the UK-Russia Year of Science and Education 2017 and were given at Central Exhibition Hall Manege and ITMO University on September 13 and 14. Among organizers are the British Embassy in Russia, the British Consulate in St. Petersburg, Central Exhibition Hall Manege and ITMO University’s Science Communication Center. At these sessions, Julian Siddle discussed the specifics of creating scientific programs for BBC Radio and the international practices of science communication. He also conducted two workshop classes for science journalists and communicators, and students of ITMO University’s Master’s degree program in Science Communication.