2019 marks the end of the 10th Stanford US-Russia Forum. SURF, as it is also known, is an exchange program for Russian and American students, postdocs, and researchers from the two nations’ top universities, during which the participants can discuss the key topics of US-Russia relations and suggest ways to improve them. Daria Denisova, the deputy head of ITMO University’s Science Communication Center, spoke with ITMO.NEWS about her experience of working on a space project with an MIT researcher, meeting with NASA staff, exploring historical records in the Hoover Tower, and visiting a historical Russian fortress in Fort Ross, California. 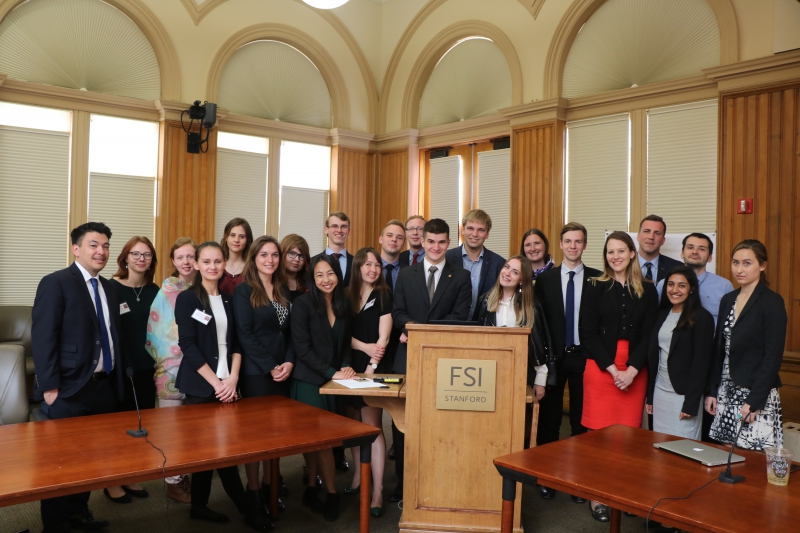 The participants of this year's Stanford US-Russia Forum. Courtesy photo.

SURF: how it works

The Forum’s program consists of three stages: the first, held in November, includes conferences in Moscow and Tyumen. The participants then spend the following eight months working remotely in 2-4 person teams on joint research projects. Each team must include representatives of both Russian and US universities, as their main goal is to study the opportunities for expanding the partnership between Russia and the USA in one of several areas (politics, business, space, power industry, medicine, etc.). The program concludes in April with a conference at Stanford University, where the teams present their projects.

Each year, 20 Russian and 20 American students, recent graduates, and researchers are selected to take part in SURF. The candidates must pass through a selection process where they are chosen from among over 700 applicants. This year, the Russian side was represented by students and researchers from the Moscow State Institute of International Relations (MGIMO), the Higher School of Economics, Skoltech, and ITMO University; the American side included representatives of MIT, University of California in Berkeley, Stanford University, the University of Texas at Austin, and others. During their visits to Russia and the US, the participants learn about the other country’s history and culture and attend conferences where they meet various government officials, entrepreneurs, and scientists from both countries.

Among some of the topics examined by this year’s teams were: the US-Russia relations in the fossil fuel transportation field, conflict coverage in the context of political discourse in the media, international arms control and law enforcement in the information revolution, regional security in Central Asia, the US-Russia space partnership, and even the role of hip-hop culture in cultural influence.

“I was very pleased to see a wide range of interesting and relevant topics chosen by this year’s delegates, as well as how they explored them in their work. To me, the key part of my work is to do whatever I can to help the participants make a valuable contribution into the dialogue between our countries,” comments Melissa Samarin, a PhD student at UC Berkeley and research director at SURF.

Daria Denisova, the deputy head of ITMO University’s Science Communication Center and a tutor at the Institute of International Development and Partnership, is the first ITMO representative to take part in SURF (Ms. Denisova has previously spoken with ITMO.NEWS about her experience of applying to the program). She was joined by Julia Milton, an MIT PhD student with expertise in aerospace engineering, in working on a project that aimed to study the current-day Russian-American partnership in the field of space exploration.

By the start of SURF’s spring stage, all participants had already completed their research and designed a promotion strategy for the project that they will continue to develop after the program’s conclusion. Daria and Julia’s article, which explores the Russia-US relations in the context of their space programs, will be included in a compendium published by Stanford University.

During their trip around the US, they continued to develop the project’s visual part and expand it with ideas acquired as a result of meetings and interviews with members of the US government and researchers. With the help of St. Petersburg-based artist Anastasiia Prosochkina, they have developed the concept for an art object that will familiarize the public with the various aspects of the two nations’ joint space exploration efforts.

“Drawing from the interviews and meetings we’ve had as part of the program, we selected the key events that we’d like to commemorate in our art project. Our core idea is to create a large art-telescope based on the James Webb Space Telescope, where each hexagon represents a particular key moment in our countries’ space partnership,” explains Daria Denisova. “One important thing that I’ve found both pleasing and surprising is that everyone we’ve spoken with, be they ambassadors, congressmen, or scientists, said that space is a place subject to no sanctions. Our history of space exploration is a good example of how our countries can work together despite any differences.”

During a visit to the Smithsonian National Air and Space Museum in Washington, DC, Daria learned about the US practices of museum management and the popularization of space. She also visited the Smithsonian Museum of Natural History to learn about the various science communication methods employed by the museum.

Some of the key moments depicted in Daria and Julia’s art piece were based on stories shared by Susan Eisenhower, the granddaughter of the 34th US President and an expert on international security, space policy, energy, and US-Russia relations. During her meeting with the researchers, she shared some stories about Soviet leader Nikita Khrushchev's Cold War-era visit to the US and presented them with a copy of their book about the US-Russian space collaboration. All in all, the art project will be based on 11 or 12 stories shared by U.S. Ambassador to Russia Jon Huntsman Jr., Russian science communicators, and experts from MIT, NASA, and Stanford.

At Stanford, Daria Denisova presented the results of her research and the concept design of the art project, which the team plans to complete by early fall of 2019. The several meters-tall art piece will make a fitting addition to the space of any science museum or exhibition. The Russian Embassy in the USA has already expressed interest in displaying the piece as part of their regular exhibition. The project’s authors are also considering venues including the Smithsonian National Air and Space Museum, Fort Ross, and the Moscow Cosmonautics Museum.

“Our goal right now is to make the object easier to move and transport. Overall, we’d like to make the viewers feel goosebumps when they see it. Every expert we’ve spoken to shared something personal and yet significant. The sensibility, masterfulness, and vision of Anastasiia Prosochkina, who joined our team, will help us visualize the material we’ve collected. And if we’re able to remind even a few young people that we have a past and a future in space, then we’ve succeeded,” says Daria Denisova.

NASA experts, politicians, and a Russian fortress in California

In addition to working on their projects and presenting them to the expert jury, the participants’ trip to the US included a series of conferences and meetings with members of the Russian and US political, scientific, and educational communities, as well as an extensive cultural program.

First, the delegates met with Congressman Joseph Kennedy III at the United States Capitol in between sessions and spoke with him about their projects. They also visited the Russian Embassy in the US and met Anatoly Antonov, the current Ambassador of Russia to the United States.

The Forum also included a large panel discussion featuring NASA staff members Meredith McKay, Melanie Dalby, and Jon Shearer, who is the NASA representative in Russia. The experts shared their experience of running international campaigns, producing content, and popularizing space exploration, such as via social networks or collaborations with Hollywood productions. They also remarked on the increasing transparency of space institutions in Russia.

During their stay in Washington, DC, the participants of SURF got to visit the US Capitol and the House of Representatives, and met a number of renowned politicians, such as the former US Secretary of Defense William Perry, former Secretary of State George Shultz, State Department counselor on nuclear issues Jim Timby, Twitter-famous California Representative Ted Lieu, and twice-Governor of California Jerry Brown, who invited them to his ranch, and other experts and members of the business community.

In Stanford, the students met with the famous American philosopher, political scientist, and economist Francis Fukuyama, who stressed that science communication can serve as an example of “soft force” in the establishment of a dialogue between Russia and the US.

For more than five years now, participants of the program have been paying visits to Fort Ross, the settlement on the coast of Northern California founded in 1812 by the Russian-American Company as a fur trading outpost. It had once been the southernmost Russian settlement in North America, and is currently both a California Historical Landmark and a National Historic Landmark.

As part of the Forum’s program, the delegates take part in volunteering activities and help preserve the fortress. They also learn about the history of the area and study the unique ecosystem of the Northern California coast. The fortress is the site of the annual Fort Ross Forum, which, says Daria Denisova, is also planned to serve as a venue for the telescope art piece.

At Stanford, the Forum’s participants were granted access to the Hoover Tower archive where they were able to explore a number of historical documents, such as photographs and documents that once belonged to the Romanov dynasty.

“The most important opportunity that SURF offers is to establish a dialogue between members of the establishment, science, and culture. Secondly, it is a great chance to develop your own project. The program lets you choose the right format that’ll work for you. Our project relies on art and immersion,” says Daria Denisova. “Before I went on this trip, I found it hard to imagine how a group of young scientists and students could openly talk with experts of such importance. But the organizational team was able to find those who are truly interested in discussing the current political situation.”

Over the ten years of its existence, SURF has accumulated a community of 150+ members. This tight-knit community, eager to share experience with new delegates and continuing to develop joint projects, is one of the program’s distinguishing features.

“My understanding of the future partnership between the United States and Russia is that, while things seem to have hit a dead end on the national level, there are still plenty of opportunities for exchange of opinions between the people and for establishing relations on the individual level. In my opinion, in the future, some of the most productive collaboration between the two countries will be made between the citizens. And programs like SURF are important precisely because they facilitate this sort of intercultural exchange and demonstrate the value of dialogue,” explains Melissa Samarin.

This year, says Daria Denisova, she has been able to establish contact with a large number of like-minded peers, some of whom will be invited as experts to take part in ITMO University’s Master’s program in science communication. For instance, Andrei Anisimov, one of the forum’s participants, is working on a project involving a medical law clinic. And Skoltech Master’s student Yulia Mitina is a biotechnologies expert whose experience would be valuable in the development of ITMO’s new program track focused on science communication in biotechnology and medicine, she says.

The next step on the team’s journey will be the Fort Ross Dialogue international conference, which will be held in June 2019 in Vologda, Russia. Team members will come together to present the results of their projects and talk about the opportunities offered to them by SURF. Fort Ross Dialogue is an annual conference that fosters discussion on the topics of cultural and humanities collaboration between Russia and the USA in the fields of science, education, and museum work. The forum is held annually in California since 2012 with the support of the Fort Ross Conservancy.