Creating a University of the Future in Seven Days: Big Challenges Summit in Sochi

From October 28 to November 3, the Russian city of Sochi hosted the “Big Challenges for Society, State and Science” summit. Organized by the educational center “Sirius”, the event annually brings together talented students and young PhD researchers from all over the country. This year, the summit’s participants not only attended lectures and workshops by leading tech companies, but also developed their own projects for a university of the future in just seven days. Helping them in this endeavor was a team of ITMO University specialists, ten experts in the fields of science communication, cybersecurity, sociology of science, biotechnologies and cyberphysical systems. Read on to learn more about how the event unfolded. 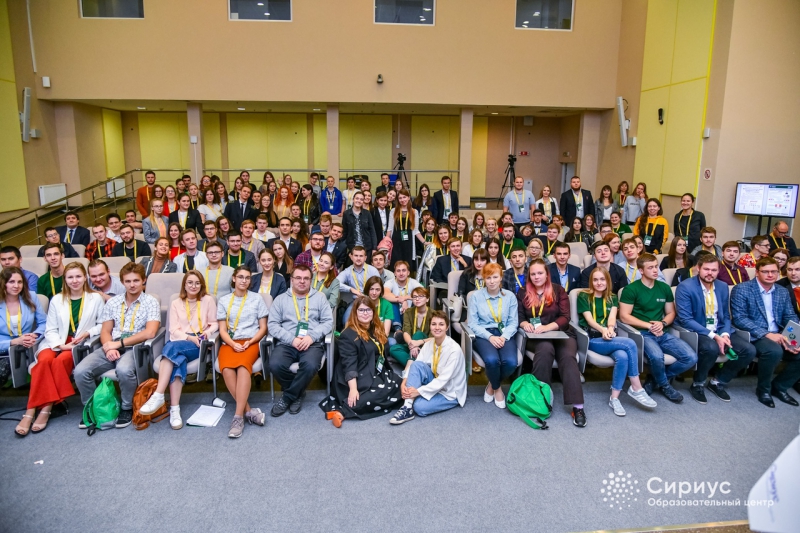 Hosted since 2018, the annual “Big Challenges for Society, State and Science” summit aims to serve as a unique platform uniting talented students, PhD researchers, leading scientists and representatives of companies, research centers and universities. The summit is organized by the educational foundation “Talent and Success” and Sirius University with support from the Russian Ministry of Science and Higher Education and the Presidential Council for Science and Education.

This year, the second-ever summit’s program spanned seven days, from October 28 to November 3, with some 600 people working on the venue. Among them were 300 students and PhD researchers from 76 universities from 32 Russian regions (participants were selected based on submitted projects and research), as well as representatives of the event’s partners: Russia’s leading universities and tech companies.

The young specialists could discuss their projects with renowned scientists, heads of major technological companies and representatives of supporting foundations. Stepping in as partners of the event were such companies as Sibur, Rosatom, BIOCAD, Yandex, Rosneft, as well as such leading universities and national research centers as the Engelhardt Institute of Molecular Biology and the Institute for System Programming of the Russian Academy of Sciences, ITMO University, Lomonosov Moscow State University, Moscow Institute of Physics and Technology, Tomsk State University and others.

From the first days of the summit, the participating students and PhD researchers were busy developing ideas for a university of the future. Divided into 20 teams, the 300 participants designed the university campus infrastructure, brainstormed the most effective ways of the interaction between science and business, and generated ideas on the creation of intersubject modules, alumni support programs and other forward-looking aspects.

A team of moderators from ITMO University helped them identify the problems faced by modern universities and formulate solutions.

“Our task was to assemble an interdisciplinary team. That’s why it included both graduates of our science communication program and young ITMO scientists who this spring did a project moderation and facilitation course at Skolkovo, as well as a sociology of science expert from Higher School of Economics’ Centre for Student Academic Development. Thus, despite the differing competencies, all moderators were united by common values,” says Daria Denisova, director of ITMO’s Science Communication Center and head of the moderator team.

The moderators worked with teams for the whole duration of the seven-day summit. At the beginning of the event, the students partook in a survey on what they see as an ideal university of the future (with 10-to-15 years planning horizon). The vote was held live, with most of the respondents agreeing that a university of the future should encompass a strong link between science and business, personalized education plans and well-developed infrastructure.

“Essentially, we obtained and were able to digitalize a list of challenges currently faced by Russian universities. As the summit was attended both by students of Project 5-100 participants and other universities, regional ones included, the scale of the problems that were named and the changes the students saw as necessary differed. In any case, though, this allowed us to identify the general objective for the universities all over the country. We managed to grasp the key ideas,” continues Daria Denisova.

Following the results of the preliminary session, the moderators were able to identify not only the competencies and priorities of the participants but also three key fields for the projects to follow: infrastructure and communication, education, and integration of science and business.

Conducted in groups, the project work lasted for the whole week, with each team being helped by three to four moderators. The participants then presented their ideas to the judges, whose ranks included the administration of Sirius University and the summit’s experts.

“On the second day of the summit, we presented the students with the topics we formulated and allowed them to choose out of the three fields, thus grouping them into three larger tracks. On the basis of the latter, we divided the students in teams of six to eight people each and asked them to come up with, or choose from the pre-prepared list, a topic of the project they were to work on, as well as a solution for its implementation (forum, online platform, educational program or others). In the course of the third and fourth day of the summit, the students honed their idea, and we helped them elaborate their projects in terms of both their contents and their presentation,” says Alexey Borodkin, summit moderator and PhD student at the Faculty of Laser Photonics and Optoelectronics.

Among the main evaluation criteria for the projects were their scalability, measurability, and ability to be implemented not only at Sirius but also any other Russian university.

“We didn’t actually have the task to choose one best project; on the contrary, we set ourselves the goal of creating such a format that would allow as many participants as possible to present their ideas. The teams with the strongest projects, regardless of their nomination or track, got the opportunity to introduce them in the course of a five-minute presentation followed by a Q&A session. The projects that needed some further work but had an original idea at their core were presented in the form of a three-minute pitch. Other participants also had the chance to pitch their idea by presenting it on a poster,” shares Daria Denisova.

The final defense of the best projects took place on the last day of the summit (which you can read about here). As highlighted by Daria Denisova, some of these ideas are ready to be brought to life.

Among them is the concept of a virtual diploma. According to the idea’s authors, the traditional diploma given to each student upon their graduation, fails to provide comprehensive information about the competencies possessed by its owner. The employer only has a couple of indicators to judge by: the name of the specialist’s alma mater, and their grades, which don’t give a clear background of the projects conducted by the student.

The team suggested that the traditional diploma be accompanied with a visual one which would represent the indicated competencies in graphic form, with some of the data verified together with the program’s partners, companies where the graduate interned at or conducted projects for. This would provide the employer with a fuller picture on a potential candidate. This idea has already attracted the interest of ITMO’s Science Communication Center, which implements two Master’s programs.

Other promising projects include an app that would allow a student to monitor their activity levels and choose the most optimal physical education format based on their daily routine, as well as a project of an expert network that could provide students with course recommendations based on input data about their interests.

According to the experts and moderators, one of the main results of the summit and the project work it encompassed was not only the development of specific solutions, but also the opportunity to, operating in tight deadlines, assemble a successful team, effectively allocate associated roles and tasks, and obtain valuable experience of working with specialists from other fields.

“Regardless of who will win, the most crucial result of teamwork is the teamwork itself. A team is a fundamental unit for manufacturing scientific knowledge. Working as part of a team can be really hard from the social, managerial, psychological point of view. That’s why the vital task of a forum like this one is to come up with a project and bring it to a conclusion without losing the organization within a team. Personally, this was my first time working with a team of moderators, and this made me fully realize the advantages I mentioned earlier: it was really cool to be part of a collective effort,” notes Sergey Startsev, summit moderator, sociology of science expert and member of the Higher School of Economics’ Centre for Student Academic Development.

“Together with the students, we conducted iteration work where step by step, discussion after discussion we tried to improve the projects from the technology and results presentation points of view. Thus, building on the initial ideas, the students succeeded in creating strong projects with a potential for being implemented and introduced into real-life processes. The final presentation session demonstrated the team’s significant contribution into the elaboration of their projects in the course of the summit. In a short period of time, the participants not only managed to formalize the purpose of their development, but also identify the technologies used and draw up a plan for the development of their solutions. In my opinion, the format the summit was held in allows to not only generate successful ideas but also unite the students as part of productive teams from all over the country,” comments Igor Pantyukhin, summit moderator and assistant at ITMO University’s Faculty of Infocommunication Technologies.

In addition to assisting the teams in their project work, the moderators also gave several workshops on science communication, Art&Science, and using social media for scientists’ professional promotion, and served as moderators of the event’s scientific sections.

“Apart from interacting with the best students selected to participate in the summit, we also took on the role of moderating large scientific sections attended by leading scientists and megagrant holders. For us, this was a great opportunity to connect with like-minded people not only in science communication but also other fields,” says Daria Denisova.