What’s Behind the Renewed Robotics and Artificial Intelligence Program

The Robotics and Artificial Intelligence program (previously called Robotics) is aimed at training specialists working at the intersection of two fields. Read this article to learn why robotics is so important for AI and vice versa, and what sociologists and programmers are to do in this program. 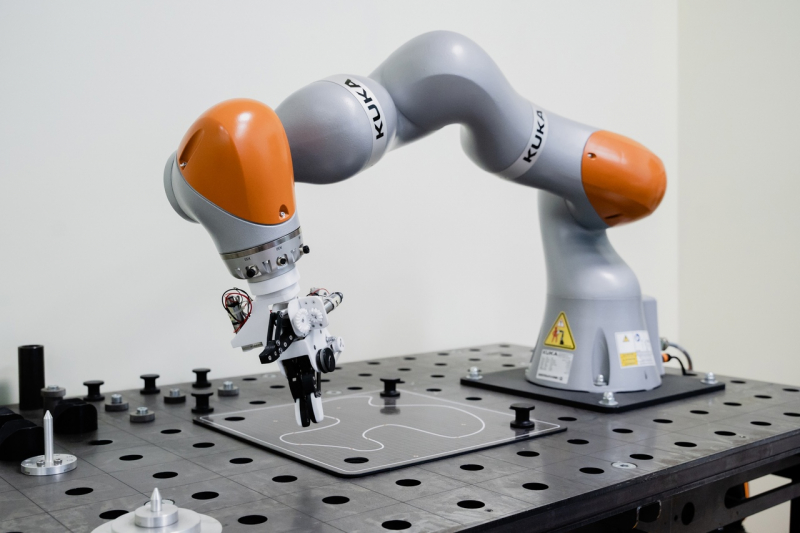 Robots at the Adaptive and Nonlinear Control Systems Lab

According to Sergei Kolubin, Deputy Director of the School of Computer Technologies and Control and head of Master's Programs Department, the program has always been the largest robotics Master’s program in Russian universities, with about 80 free-tuition positions for Russian and 10-15 tuition-free positions for international students. This year, even more people will be enrolled tuition-free: 97 students altogether.

Moreover, the program once had a strictly scientific focus, but now the concept has changed. As it's possible to create different specializations in the framework of one program, Alexey Bobtsov, the program’s head, decided to go for two types of specializations. Starting with 2021, one specialization will have a scientific focus and train researchers , and the other will have a corporate focus and train developers in collaboration with Sberbank Robotics Laboratory.

“The program changed its name several times. Now, it includes the words “artificial intelligence”. This is not some fashion statement, even though there is a naming trend “take X and add AI” much as it previously was with the internet. This is a different story; to my mind, it’s a two-way road. I mean, on the one hand, contemporary robotics offers lots of interesting tasks essential to the comprehensive development of artificial intelligence, and on the other, machine learning methods can be used to solve the issues of contemporary robotics that can’t be solved with a model-driven approach,” notes Sergei Kolubin.

Why AI is essential for robotics

There are lots of tasks associated with high-order decision support systems, and it's the machine learning and AI methods that are actively used for their solution: for example planning and interpreting of human behavior in human-machine interaction.

Modern robots work in an unstructured dynamic environment. Oftentimes, those are collaborative robots that directly (and physically) interact with people, and human beings are quite unpredictable. It can be hard to predict their behaviour and present it in the form of mathematical rules. That’s why often it is the machine learning and AI methods that are used to solve the tasks that can't be solved with formal analysis methods.

“Our program is mostly about algorithms and software. Simply put, we make robot brains. We’ve started to use the term “embodied intelligence” a lot more frequently. It means that the system becomes “smart” on all levels, and AI methods find their applications not only in the field of planning and control, but also design and optimization of robots. At the Adaptive and Nonlinear Control Systems Lab that our program has close ties with we conduct the associated research, including research that has to do with generative and morphological design,” comments Sergei Kolubin.

Why Robotics is essential for AI

“There’s such an interesting thing as Moravec's paradox. It states that it’s easier to teach AI to play chess and process images than to teach it the simplest skills of sensory-motor coordination that are associated with perceiving space and moving, as well as manipulating objects. Despite all the progress in the field of computer vision and machine learning, modern robots’ capabilities in what has to do with working with the physical world are far less than that of a three-year child,” says Sergei Kolubin.

What’s more, without entering the physical world and embodiment in robotics, artificial intelligence is limited in its development. The fact that neural networks learn on purely information processes by using voice data or images hinders evolution of AI.

“As part of our educational program, we aim to find synergy between these fields that are closely tied within the global research context. But there still exists a belief that robotics is about mechanics, kinematics and Newton–Euler equations, whereas AI is something from an entirely different field. In reality, it’s not like that: robotics is a testing site for the development, approbation and verification of known AI methods and the development of new ones,”  Sergei Kolubin comments on the program’s goals.

According to him, several factors played into the decision to expand the Master’s program: the University’s global policy, the partnership with the Sber company, joint projects with which are those at the interface of robotics and AI, and the confirmed demand from employers and applicants.

Applicants for Robotics and Artificial Intelligence

As described by Sergei Kolubin, the future applicants for the program are those who want to learn a competitive profession with a good salary and improve the skills that will be relevant even if the person won’t decide to dedicate their life to robotics but still stand out from the mainstream, try new things, follow a path of their own and maybe even create their own product that has no existing counterparts.

On the whole, it will be those who associate themselves with the field of robotics, control systems and programming. But people whose first education is far from these fields also join the program, for example linguists and sociologists. These people see that robotics can be interesting for them, as they can fulfill themselves as mediators or at the interface of robotics and their field of focus.

Sergei Kolubin describes the application of sociology in robotics as follows:

“For example, some 20-30 years later, we’ll come to understand that we didn’t account for some effects that the development of robotics has on society. In order to not make things worse for humanity in general or for specific people, it’s better to take notice of such things right from the start. And this won’t do without specialists in sociology. Robotics is a field for not just specialists in electronics, mechanics and programming, there are many tasks for everyone.”

Those who want to code also join the program:

“Every year, we see that those who join our program want to see themselves as good applied programmers. This has to do with the landscape of the labor market. There are two essential factors for a robotics specialist: on the one hand, the knowledge of the subject field, understanding the specifics of the systems they are working with, knowledge of physical correlations and mathematical apparatus, and on the other — skills associated with developing and debugging code that implements complex models and algorithms in Python, C/C++, Java and other languages in various environments,” comments Sergei Kolubin.

The program’s team sets the task of training a new type of specialists at the interface of subjects. They also hope that this will help them with their own research, as Master’s level education is a lot about co-creation, and ITMO’s strategic goal is generation of new knowledge, technologies, businesses and markets.

Advantages of the program

According to Sergei Kolubin, doing a Master’s program at ITMO has several important advantages. First of all, the lecturers at these programs are scientists who work at the frontlines of their professional fields, which provides for a unique and relevant curriculum.

“ITMO University has great researchers in the field of control science. We’ve also been in the first hundred of ARWU (Academic Ranking of World Universities) in the field of automation and control. Our students get the opportunity to learn first-hand about the new methods and technologies of sensorless control, identification of systems, the synthesis of adaptive controllers and energy-aware control. We also offer unique courses in generative design of robotic systems,” adds Sergei Kolubin.

Secondly, the infrastructure. The program has world-class research equipment: robotic systems, labs, robotic manipulators and collaborative robots, mobile robots, drones and so on, and the Master’s students will have access to it.

Thirdly, the corporate partners. Among them are such companies as Sber, Geoscan, StarLine, Diakont, Taurus-Fenix and Arrival Rus.

“This gives us an opportunity to involve best international lecturers and scientists, and our students can participate in academic mobility programs, for example as part of Erasmus+ at best universities of the Netherlands, France, Finland, Italy, and Norway. What’s more, we have joint programs with TalTech (Estonia) and LUT (Finland). Every year, up to 10 students enroll at joint programs,” comments Sergei Kolubin.

He adds that the program’s Master’s students are potential employees of international laboratories and participants of joint projects with industrial partners.This gives them an opportunity to pursue their careers while studying and earn good money at the university.