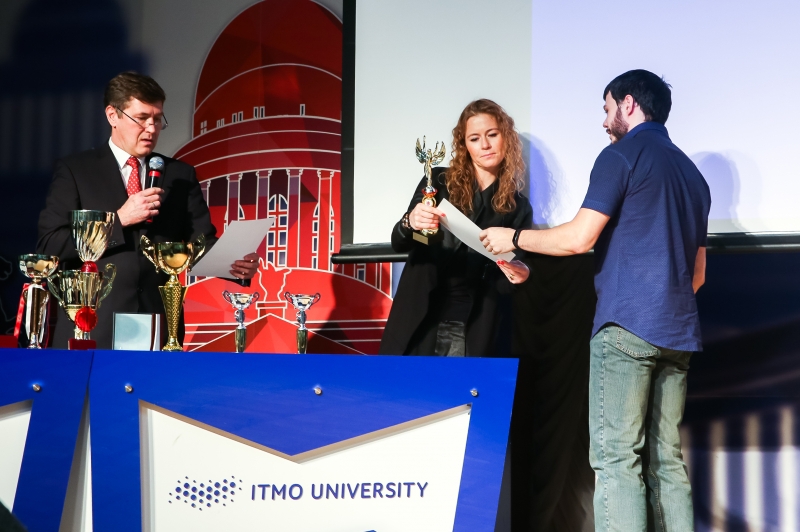 The final Academic Council meeting of the year began with awards and diplomas being presented to ITMO students who have distinguished themselves in various competitions. While the greatest victory of the outgoing year was the win at ACM ICPC, making ITMO seven-time champions of the competition, there were also great victories in the area of robotics.

In early November, ITMO’s high school team, together with their coach Igor Lositsky, took the gold in the senior age group of the open category at the World Robot Olympiad (WRO-2017), an international competition for talented school and university students from more than 60 countries. The team also recently took second place in the “On Stage” category at the RoboCup Asia-Pacific competition where they presented the well-known robot Seldon.

It’s not just teenagers who can make great robots; our university students have also participated in international competitions. In late November, first-year students from ITMO took the first place in the Robotex-2017 competition, which has recently become Europe’s largest robotics competition. ITMO’s Museum of Optics expanded its collection with some new and unique exhibits this year. In collaboration with the Hellenic Institute of Holography and Russia’s Gokhran (State Fund of Precious Metals and Stones), the university’s scientists built a collection from 20 optoclones with images of historical treasures from the Diamond Fund collection and the State Fund collection of metals and precious stones of Russia. In October, the exhibits were presented at an exhibition in Moscow in the St. Andrew Hall of the Kremlin, which was visited by the country’s top officials and the curators of the largest European collections.

According to Sergei Stafeev, Professor at ITMO’s Department of Physics, you can already see 5 of these holograms in the Museum of Optics on Birzhevaya 14. Prime Minister Dmitry Medvedev, who had previously visited the exhibition, expressed his belief that the opportunity to see these unique holograms should be given to citizens from all over the country. Vladimir Nikiforov, the Vice Rector for Research at ITMO University, opened the main part of the meeting by showcasing the results of the University’s R&D from the outgoing year, as well as talking about the tasks facing the University’s staff in the coming year.

Regarding the results of R&D competitions, he noted the active involvement and interest of students to participate in projects. The quality of student R&D increases every year, and, in terms of its level, it’s as good as “adult” development, said Vladimir Nikiforov.

For example, at the Department of Mechatronics, under the guidance of Dmitry Kupriyanov, a PhD student, R&D is being developed for an educational mechatronic systems for the study of robotics. At the Department of Applied and Computer Optics, students are working on two projects. One of them concerns the development of an optical labyrinth and the other aims to create a universal stand for control mirrors with a diameter of up to 200 mm. Another project by the Applied and Computer Optics Department, which received support, was a universal stand to be used as a base for control mirrors with a diameter of up to 200 mm. According to Lapkayev, a student at the department and the head of the project, the idea came from manufacturing: when assembling and adjusting the control circuits, a significant shortage of the available stands was revealed. In particular, when the rim with the control mirror was tilted, the top of the control mirror shifted from its original position (more about this project and about other promising developments that are funded by the University can be read here and here). “These projects meet the requirements of “adult” R&D, so I want to acknowledge that at our university there are specific initiatives in which our students are proving to be mature designers. This trend, in my opinion, will facilitate the regeneration and renewal of engineering training at ITMO University”, noted Vladimir Nikiforov to the members of the Academic Council.

The total amount of R&D in 2017 was about 2.625 billion rubles, which is about 300 million greater than last year, and is the highest indicator of all the past years. Regarding the results of the organization and conduct of R&D in 2017, ITMO’s Vice Rector for Research noted that the university's departments are still very actively applying for project grants. Furthermore, in the last few years scientific research has become much more practical.

However, in the coming year, the University must increase the number of orders it has on a contractual basis, said Vladimir Nikiforov. A large amount of research and development work carried out on the orders of high-tech enterprises of the real sector of the economy shows that there is a demand for R&D and ensures the financial stability of such work, he said.

Among other objectives of the University in 2018, Vladimir Nikiforov emphasized the further development of world-class scientific centers, as well as R&D and the implementation of a system for the creation of dissertation councils and awarding degrees at ITMO University. In 2017, ITMO University was among 19 Russian universities which received the right to award scientific degrees on a PhD level and establish dissertation councils. The corresponding decree was published on the government website. Another presentation at this year’s final meeting of the Academic Council was given by the First Vice Rector, Daria Kozlova, who spoke about ITMO’s new educational standards for organizing educational activities at the University. Development of the new educational standards is being conducted in the context of the road map for the development of the University in 2018 to 2020, which was adopted and successfully presented to the Council on Competitiveness Enhancement of Leading Russian Universities. This year ITMO University was placed in the top group of universities participating in Project 5-100 together with HSE, MEPhI, MIPT, NSU, MISiS and Tomsk State University. The university’s roadmap was also presented at the 7th meeting of ITMO University’s International Council.

“The development of education is the main focus of our strategic plan for the next three years, and in the long term. In the roadmap we paid great attention to the requirements of the future graduates, transforming the educational process, new technology used to implement educational activities at the university. In this context, freedom to choose electives and the opportunity to create your own individual trajectory is what we are working towards. And this understanding has been laid out in ITMO’s roadmap”, explained Daria Kozlova.

She also noted that ITMO University, being an open university, cannot develop without intensive cooperation with leading academic and industrial partners. Thus, the further transformation of the educational process will be conducted in accordance with the concept of a network university and in close cooperation with companies.

In developing new standards, the Federal State Educational Standards were also taken into account, as well as the professional standards and requirements which are applied to graduates by today’s industry. Key trends in the development of science, foresight data and international experience were also all taken into account. As Daria Kozlova explained, the main features of educational programs based on these new educational standards at ITMO University will be the opportunity for students to develop their individual educational trajectories. In addition, students now will not be confined to just one Department or faculty; mobility within the university will become one of the means of ensuring student integration and communication and will allow students to select modules and disciplines of other faculties and schools within their speciality, said ITMO’s First Vice Rector.

In regards to the implementation of international programs of academic mobility, one of the goals is to simplify the process through which students are able to participate in such programs.

“We understand that these days this process is sometimes slowed down by bureaucratic procedures; thus, the challenge before us is to facilitate the implementation of both domestic and international mobility” - she described further.

It is worth mentioning that new educational standards will give more freedom to the format of English-language Master’s programs. That is, it may adhere to the classic study format or be available in modules.

In conclusion she added that, after the standards are approved by specialists of the university and heads of the schools and departments, a great deal of intensive work will remain. Based on the existing schedule, the implementation of programs based on ITMO’s new educational standards will begin on 1 September 2018.