Universities all over the world are putting efforts into creating an English-language culture among their students, professors and researchers, as such knowledge lets universities reach out and enter the international education market, explained Kelli Odhuu, new head of the regional English Language Office at the US Embassy, during her visit to ITMO University’s International Office. She learned about the university’s efforts to popularize the English language and spoke about the general issues that universities worldwide encounter in this endeavor. 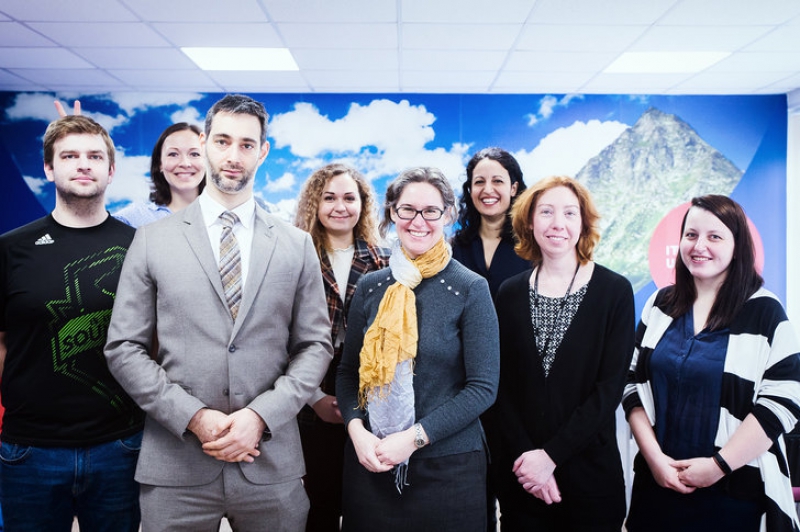 English as a foreign language

The Moscow-based English Language Office (ELO) promotes the English language, and English-language culture, among educational institutions, tutors and students. ITMO University has participated in ELO’s programs since 2015. For the third year in a row, ITMO is part of the English Language Fellow program, which brings American English-language teachers to Russia to share their experience with fellow teachers and help introduce new teaching methods.

For two years, ITMO University cooperated with Christopher Hastings, who helped with teacher training at ITMO’s Academic Writing Lab. This academic year, the staff is joined by Akiva Weiss, who is conducting some of the events aimed at the professional development of the university’s English language teachers. During the meeting, representatives of the International Office and Kelli Odhuu discussed the future prospects for ITMO’s collaboration with other English-speaking teachers as part of the English Language Fellow program.

“Unfortunately, it’s not all up to the English Language Office. I regularly conduct interviews with candidates for the program, and many are psychologically unprepared for moving to Russia for a period of time, as they don’t know what to expect. For this program, we want to find the kind of people who understand the Russian universities’ needs, and can share their experience in academic writing and new teaching methods. My understanding is that this is what you do here at ITMO University – introducing new methods and developing academic writing. It’s also important for us that the participants of English Language Fellow, too, acquire new skills – that the participation in the program makes them even better professionals than they had been before,” – explained Ms. Odhuu.

ITMO University has also participated in the English Language Specialist program, which lets universities invite English-language experts for short-term visits. In May 2016, Eve Smith of the Samara Academic Consultancy Center came to ITMO’s Academic Writing Lab to conduct a workshop on academic writing.

The Lab aims to develop academic writing skills of the university’s researchers, professors, and students. This doesn’t mean that the Lab’s staff have to proofread or translate text from Russian to English; instead, they conduct classes and workshops, and help with writing international grant applications, CVs and letters of reference.

“Universities in every country want to improve the level of English-language skills among their students and staff, especially knowledge of their respective fields’ vocabularies. After all, this is the only way for them to join the international scientific community – and that applies to English-speaking countries, too. Regular and academic English are two different things. You can’t just pick some academic term and look it up in a dictionary, because scientists create new words in the process of their studies, and these words can only be understood within a specific, narrow context,” – noted Kelli Odhuu.

She also added that the most important thing that professors, scientists and students can do to improve their academic English is to read lots of scientific writing. This includes textbooks published by foreign universities or scientific articles. Online resources, such as the AmericanEnglish website, which hosts English-language audio and video files, are also useful.

Students and researchers at ITMO University are provided access to databases of academic journals Scopus and Web of Science, as well as the new analytical platform Dimensions, says Maria Didkovskaia, head of the Internationalization Department at ITMO. Students can use the information from scientific publicationswhen working on their own research.

Researchers from ITMO University are publishing more research every year, which is why teaching academic writing to staff and students becomes an even higher priority. This year, the Academic Writing Lab will more actively collaborate with their colleagues from the University of Arizona; among their plans are internships for teachers from ITMO University, workshops in both the US and St. Petersburg, and the establishment of a system for monitoring and publishing scientific articles.

“Professors note that our programs on academic writing and the various new teaching technologies have an effect not only on how they teach in English, but also how they teach in general, as it helps them learn about new practices in education,” – notes Ms. Didkovskaia.

As Kelli Odhuu noted, there is still the issue of a lack of motivation. Many students don’t understand why they need to learn a foreign language, and teachers and professors don’t see the point of changing their approach just to teach their students new skills or approach the international education standards.

For one, today’s major tech companies tend to prioritize not even their employees’ hard skills, but their soft skills, i.e. their ability to establish contact, work in teams, lead others, seek new solutions, etc., explained Maria Didkovskaia.

She added that ITMO University is currently developing courses on teaching soft skills, and will launch them in 2019. Foreign experts are expected to join the initiative. For instance, the university is currently in talks with Christopher Hastings to have him conduct workshops in English for students of technical programs.

ITMO’s Foreign Language Training Center is also currently conducting a program for professors interested in improving their English language skills. The program is partially based on the experience acquired by the university’s representatives during their training at the University of Arizona. The Content Area Teacher Training program helps teachers from around the world transition into teaching their subjects in English (be it chemistry, physics or programming) to students for whom English is not their native tongue. In 2017 ITMO University joined the program, sending 10 members of its staff to University of Arizona for 5 weeks.

“Most students and teachers realize that the English language is crucial for international collaboration and work in any field. But for teachers it is sometimes simpler to do what is “tried and tested”: they know, say, physics, they know English, and they teach their students the way they’re used to. That is why we often have to explain that there are international standards that are different, and why it’s important to teach academic subjects in English,” – says Maria Didkovskaia.

Kelli Odhuu’s visit to ITMO University was her first visit to a Russian educational institution after she had been appointed head of the English Language Office. She emphasized that her office has a great deal of resources that help students and teachers all over the world improve their English skills and learn about the culture of the United States; at ELO, one may also learn about opportunities for studying in America. The office also supports various cultural events such as lectures from English-speaking figures and musical bands.

“I still need some time to figure out how Russian universities operate these days, what issues and demands the teachers have, what the students need and what is being done to cultivate an English-language culture in universities. Then, I would be able to figure out what must be done to continue promoting the English language in Russian academia,” – she explained.