Last Saturday, ITMO University held Russia’s first reunion of alumni of the international student programming contest ICPC. The event brought together winners and participants of the previous ICPC rounds, as well as representatives of international IT companies, organizers of regional competitions, judges, coaches and volunteers that have helped with the organization of the contest over the years. The meeting was organized by the ICPC Foundation, which works to create an association of ICPC participants from all over the world, and supported by the company Huawei. Participating as an honorary guest was Bill Poucher, executive director of ICPC. 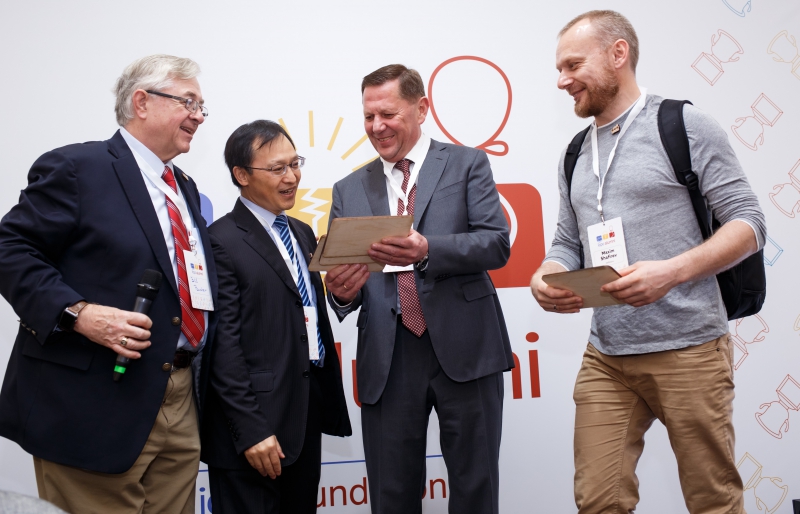 Dating back to 1970s, ICPC (International Collegiate Programming Contest) is the oldest and most prestigious international programming competition. Though up until the 1990s the majority of participants represented the universities of the US and Canada, for the past 30 years the contest underwent a truly global transformation, with over 50,000 students from more than 3,000 universities of 110 countries taking part in the 2019 ICPC. The finals saw a total of 135 teams compete for the main prize.

The selection for the final round of the contest is conducted via a multistep system as per which all universities of the world are grouped into regions where the semi-finals are held. Large regions are divided into subregions which have their own quarterfinals. Each semi-final has its own annually-defined quota of teams that can go through to the finals. This quota depends on a number of factors, including a number of teams participating in the qualification round in that region, the results demonstrated by the region’s participants for the history of ICPC and others.

In recent years, it was the teams from Russia that tended to win the prestigious contest. From 2012 to 2017, the champion’s cup was being claimed by two St. Petersburg universities: ITMO (four victories over the past six years) and St. Petersburg State University (two victories over the past six years). Last year’s tournament gave rise to a new star, the team from the Lomonosov Moscow State University, which also took first place at the 2019 competition.

But it is ITMO University that remains the most distinguished institution in the entire history of ICPC, accounting for a total of seven wins. What’s more, it was the representatives of ITMO University that began the ICPC movement in Russia, still actively continuing to promote the competition in the country. That is why, as noted by Veronika Soboleva, director for development at the ICPC Foundation, the choice for the first ICPC alum reunion was not a gratuitous one.

The creation of the association of ICPC participants from all over the world is one of the ICPC Foundation’s main priorities. Last year, the meeting bringing the community together was held at Stanford University, the US. The event generated a large response, which prompted the organizers to hold similar events in other regions of the world.

As of now, apart from the existing programs, the ICPC Foundation plans to implement a range of new initiatives, the promotion of which will rely on the expertise of the community. Among these is a creation of an endowment fund aimed at supporting talented participants in the development of their potential, says Veronika Soboleva. In addition to that, another important objective of bringing the members of the community together on the basis of such regular meetings is maintaining the exchange of professional experience and helping recent graduates find employment or launch their own projects.

“ICPC is a platform that unites the academia, the industry, and the community. And our main goal is to increase this bond. It’s not a secret that the cooperation between the university and the industry doesn’t always work as well as we would want it to. We hope that events like this one will help to build this dialogue and create a platform for universities to share their ideas and experience and the ICPC and representatives of business to discuss them and give their feedback,” comments Veronika Soboleva.

Attending as an honorary guest, Bill Poucher, executive director of ICPC, spoke about the development of the international community. Today, it is constituted by over 300,000 members, including not only participants and winners of the previous competitions but also over 5,000 organizers, judges and coaches, as well as volunteers that help in the setting up of the contest which continues to grows in scale each year. Thousands of the competition’s participants now work in the industry. According to the data provided by the ICPC Foundation, they are involved in the work of over 1,500 international companies. More than 500 alumni work as CEOs, over 20,000 are engineers and software developers. The ICPC community is also very active in academia, with over 2,000 of past participants serving as university professors.

The executive director of ICPC also highlighted that many in the community are young specialists. At the same time, their field of activity is not limited to IT. They work at a variety of fields, including consulting, finances, banking and others.

“ICPC is a family which, without any exaggeration, unites people all over the globe. This global family gave rise to several generations of first-class programmers. I remember the times when we were just starting to collaborate with ITMO University. Back then, we stood in the face of great challenges and great opportunities. And then I learned that here there was a program that aimed at gathering the most talented students and provide them with opportunities for growth. What you are doing is really impressive,” said Dr. Bill Poucher.

All in all, the event brought together over 100 winners and participants of past competitions from St. Petersburg (ITMO University, St. Petersburg State University), Moscow (Moscow Institute of Physics and Technology, Lomonosov Moscow State University, National Research Nuclear University MEPhI), Yekaterinburg (Ural Federal University), Perm (Perm State University), Nizhny Novgorod (N. I. Lobachevsky State University of Nizhny Novgorod), and Minsk (Belarusian State University), as well as coaches, judges and representatives of major IT companies which support the community and the conduct of the competitions on different levels. Participating as honorary guests of the reunion were Maksim Shafirov, founder of the company JetBrains; Mikhail Mirzayanov, founder of Codeforces, the world’s largest platform for hosting programming competitions; Alexey Fedorov, founder of JUG.ru, the Russian community of Java developers and organizer of Russia’s largest conferences on Java; Alexey Maleev, vice rector of Moscow Institute of Physics and Technology, founder of Moscow Workshops ICPC and director of the ICPC 2020 finals; Sergey Chernyshev, head of educational programs at Yandex; Dmitry Aksenov, founder of the company RDI, and others.

“I am glad to be here in St. Petersburg today, and express my gratitude to ITMO University for securing Russia’s good name in programming and bringing the country into the leading positions in the field. Thanks to these efforts, the final round of next year’s tournament will take place in Moscow,” noted Dmitry Aksenov. “The way I see it, ICPC alumni reunions is a great tradition that allows ICPC alums to keep in touch going forward.”

The 2020 International Collegiate Programming Contest will be held at the Moscow Institute of Physics and Technology, which will also welcome a corresponding alumni reunion. In the meantime, a number of alum meetings are set to take place this year. According to Veronika Soboleva, the ICPC Foundation’s goal is to organize the meetings annually and in every region where ICPC is held. The next meetings are to take place in Turkey and Austria this September, while in November, the members of the ICPC community will be received at Peking University, China.