Selamwit Kassaye is a robotics and AI maven from Ethiopia. We met during the Russian Robotics Week and dove right into all things robots, co-bots, and of course, Avengers! She shared many insights about this amazing field. Read on to learn more about our discussion. 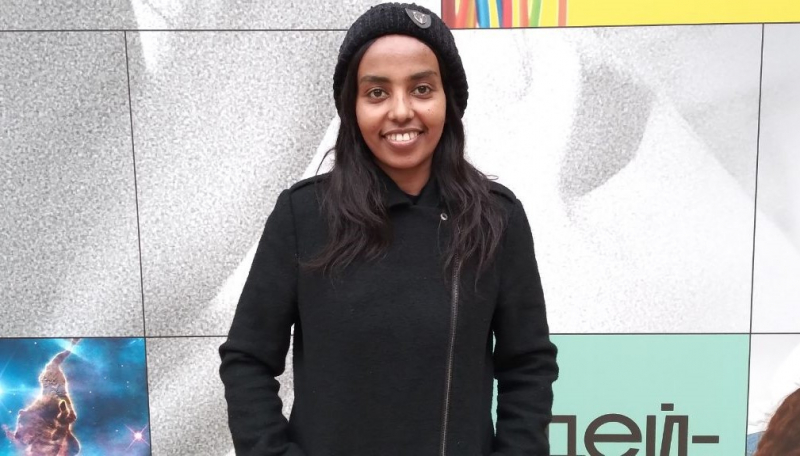 Selamwit Kassaye from Ethiopia. Photo courtesy of the subject

Where are you from and what are you studying at ITMO?

I am an international student at ITMO University from the country of Ethiopia in East Africa. I am pursuing a Master's in Robotics and Artificial Intelligence. I have been a fan of robots since my childhood and that’s why I did my Bachelor’s in electro-mechanical engineering in my home country. I learned about mechanics, i.e. how machines work, with a focus on electronics. Now I want to implement that knowledge when building robots. The field of robotics is very multidisciplinary. It includes mechatronics, software engineering, AI, and electrical engineering. However, I am mostly interested in designing robots.

Have you ever worked with a robot?

I had my first encounter with a robot at ITMO University’s Robotics lab. I had never seen a robot so close before that. I was amazed and excited. The laboratory at ITMO is fantastic: there are so many robots of different types that are programmed to perform specific functions.

Can you explain what those different types of robots are?

Sure. Robots are classified based on their functionalities. It is not like one robot can perform all the functions. There are industrial robots that are designed to work at factories. Then there are mobile robots that can move from one place to another. They are mostly used in transportation. In addition to that, there are humanoid robots, machines that look and act like human beings. They are very popular right now. They are used a lot in restaurants. There is a restaurant in Japan called the Robot Restaurant where everything apart from cooking is handled by humanoid robots. Robots can also be categorized on the basis of their structure. For example, the robots that have wheels for better movement are known as wheeled robots. There are a lot of robots but my favorites are the industrial ones. There can be different types of industrial robots too. Some are programmed for picking and dropping cargo while others can be designed for assembly, like the ones used in car manufacturing. At ITMO, I saw a universal robot, a small one made by the German automation company KUKA for learning purposes, and a co-bot.

Co-bot stands for collaborative robot. Industrial robots are pre-programmed. They act according to whatever they are taught to do. They cannot learn anything new from the user. Therefore, there is a risk that they might hurt you. But a co-bot can collaborate and interact with the user. It is one step closer to a living being. For example, if you touch a co-bot it will sense it and stop working and wait for further commands. They are very safe to work with.

I am interested in industrial robots that would also be collaborative to some level. I come from a developing country that does not have many industries – and those that are there are traditional with no modern tech. I want to change that. I wish to apply whatever I learn here in the industrial sector of my home country because I believe we can improve its economy by implementing industry 4.0. That is the major driving force for me.

It is a term that is used to describe an industrial setup where everything is automated and every activity is controlled by computer algorithms without the need for human intervention. Industry 4.0 makes use of industrial and collaborative robots. Some other of its emerging technologies are the Internet of Things (IoT), artificial intelligence (AI), cloud computing, cognitive computing, smart factories, and smart manufacturing.

Do you think automating everything would lead to mass unemployment?

It might lead to some unemployment but it should not mean the end of jobs for humans completely. For reference, early humans used to hunt with weapons made of stones like spears. Many people were involved in the manufacturing of those weapons. But once modern weapons were invented like guns and missiles, those older weapons were no longer used. But that didn’t take away all the jobs in the world. Instead, it created new opportunities for people to work. Similarly, industry 4.0 will surely take away some jobs but will definitely create a few new ones. There will be a huge demand for programmers and developers. So, it is not going to be a dead end.

What is your opinion on humanoid robots like Sofia? Do you think AI robots can be a threat to humanity?

I admire these developing technologies. I really like humanoid robots but I think we should identify the boundary for such developments. Every scientific invention is a boon or a bane. For example, dynamite was a great invention with which we could develop roads and railway tracks through the mountains. But on the flip side, they wreaked havoc when in the wrong hands. Similarly, AI can be an amazing tool when used properly. At the same time, it must be kept under check to prevent any accidents in the future. I feel ethics plays a major role here.

Many movies, like Marvel’s Avengers: Age of Ultron, have shown such scenarios where a rogue AI attempts to destroy the entire planet. Do you think we might end up in a similar situation in the near future?

I am not so sure about the movies because I don’t watch a lot of them but I can understand what you are talking about. Science has always been a mixture of both, good and bad. I remember an incident when the humanoid robot, Sofia was asked if she would destroy humans and she cheerfully replied, “Yes, I would destroy humans!” Was she mocking or having fun? Nobody knows. But it all comes down to the training she receives during her creation. There is a popular concept in science known as raising an AI baby. Just like raising a human baby, a newborn AI algorithm also needs to be taught well. Any mishandling of the algorithm can lead to it going rogue. Therefore, it all depends on the creator. A scientist with good intentions will always make a good AI. According to me, the movie scene that you described might be a bit too unreal because we always have an abort option that will completely shut down the AI. Nevertheless, one should always act carefully.

Elon Musk once said that robots are aliens among us. They are made up of silicon and can think on their own. Do you agree with his statement?

Any reference to aliens is very controversial. It is true that robots have some thinking abilities but those are limited to their algorithms and the code behind them. I believe a living organism cannot be identified only by its thinking abilities. There is more to it. Therefore, I do not agree that robots are aliens among us.

Do you think robots can have social skills? Can they create their own families?

With the speed at which technology is developing, nothing seems impossible. We do have social robots that are used when treating people who are battling depression. Many people suffer from loneliness. Many kids are bullied at schools and they usually have no friends. Such kids often suffer from mental disorders. These social robots are often used to help such kids come out of depression. To answer the second question, an AI algorithm can be easily reproduced and transferred to a different robot. So I won’t rule out the possibility of robots having their own families.

Looking on the brighter side of things, what are the applications of robots that have benefited humanity the most?

Robots are used a lot in the biomedical industry. Robotic prosthetics are a wonderful invention for people who have lost their limbs or are disabled from birth. These robotic prosthetics give them a new life. An opportunity to work and be a part of the world. People who are paralyzed can also benefit a lot from this technology. The working of these prosthetics is simple. The prosthetic is connected to the person’s nerves through electrical sensors. The brain emits signals in the form of electrical pulses, which are relayed to the robotic prosthetic and using sensors and processors. The prosthetic can decode the signal and perform the task. In the future, with more developments, this technology will become faster and more precise.

What is your opinion on using robots in the military?

I have heard of this before. Some countries are planning to substitute human soldiers with robot warriors. They are called military robots. They can be self-driven or controlled remotely by a user using telecommunications or the internet. But it is a scary scenario. These robots would be very accurate and overpowered. They would be nearly indestructible and would have no emotions or pains. Flawless fighters are the worst thing. If two countries start a war involving robots, it would surely mean the end of the world and mass destruction. Therefore, it is better to avoid it. Certain things should not be developed further.

There is a popular concept going around nowadays of uploading your consciousness to the internet. Do you think this is possible or ethical?

This is quite a moonshot idea because human consciousness is not the same as digital data. However, there could be some advantages to this technology if it ever came to be. For example, in the current practice, if a person is in a vegetative state, they are euthanized. But, that is not the right thing to do. First of all, because they might recover and secondly because the brain might still be functioning. Similarly, the people who are in a coma or are completely paralyzed do not deserve to simply die. This kind of technology might provide them a second chance to live their lives. However, I think consent of the person would and should play a big role in this.

Robotics is a very popular field of science and it will keep growing. What Is the most important thing that is required to become a good robot developer?

The most important thing is education. Good education makes a good professional. To be a good and ethical robot developer, you need proper education. I am so glad that I joined ITMO because the education here is superb. The teachers are so experienced. The laboratory is amazing. I love attending practical classes.

Where do you see yourself in the next five years?

I want to learn as much as I can in the next few years. I want to indulge in research and make myself ready to take on the challenges. After I finish my studies I will most probably go back to Ethiopia and establish my own robotics company. In the next five years, I would like to see myself closer to my dream of bringing a change in my country. I want to see myself playing a major role in transforming my country’s status.