Yimer Getnet: Food Biotechnology is a Promising Field and I Want to Be Part of It

All the way from sunny Bahir Dar in Ethiopia, Yimer Getnet came to ITMO University last September to enroll in our Master’s program in Food Biotechnology. He loves this field and hopes to contribute to its future, particularly back in Ethiopia. 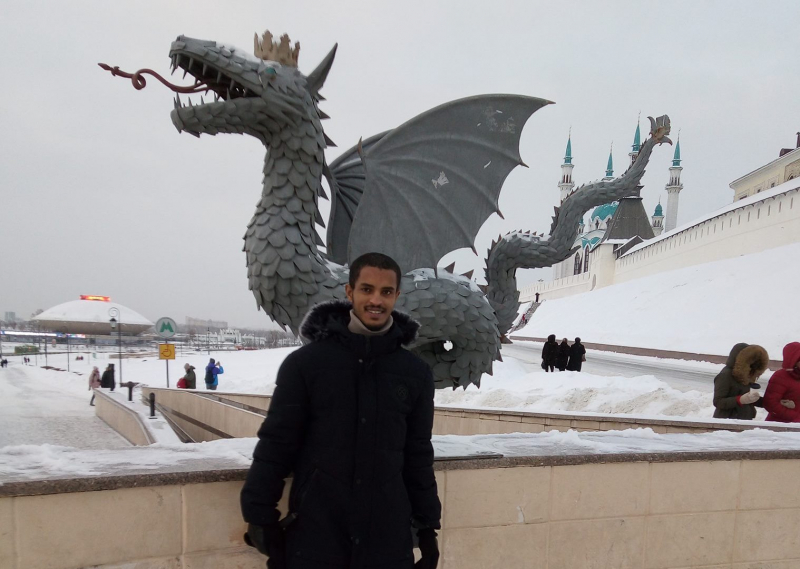 Yimer while he was studying Russian in Kazan.

How did you pick Russia as a place to study?

When I was a teenager, I had the opportunity to learn a lot about Russia. I discovered that it has a fascinating history and considerable influence on science and technology.  In my opinion, Russians are very educated people. This influenced me greatly. Before coming here, I also knew that it was home to many distinguished artists, philosophers and scientists and it was my dream to study in the same place as all those talented people. Besides, I wanted a little change in the weather. I come from a very tropical and warm part of the world so it was fascinating for me to experience a colder climate like in Russia. Fortunately, I love it.

I am in my first year here at ITMO,  but I knew quite a bit about the university before coming to Russia. I was surprised to learn that ITMO University has several programs taught in English and Russian, and it also has double degree programs, which makes it easy and more convenient for scholars to gain knowledge and experience in two different universities at the same time.

It has only been four months since I came to St. Petersburg but I have already taken part in two international guest lectures on food biotechnologу and those too have surprised me. As a Food Biotechnology undergraduate, I spent most of the time inside a laboratory doing experiments and it may be obvious for some but it is important that the facility remains organized it speeds up work a lot. ITMO is good at that.

The staff at the international office are active, organized and helpful. They reply to emails in less than an hour. So my advice to all foreign students at ITMO would be to reach out to them without hesitation - they will always try to help.

What is your primary goal in your Master’s degree?

Food Biotechnology is a new field but I am certain it can turn into a very promising branch in biotechnology with excellent growth potential. My main goal is to study as much as I can because I want to be an expert in food biotechnology for all the possibilities it has.

Can you elaborate more on why you chose this field?

Well, food biotechnology deals with production processes, including bioengineering, that makes food.  I have always felt a fascination with this discipline. Ethiopian economy depends on agriculture but most of the country’s agricultural products are being consumed with minimal processing or exported with no added value. The food and beverage industry is among the largest, but remains traditional and produces cereal, flour, pasta, biscuits, beer, etc. As a result, the sector has not yet reached its potential. I want to be part of the solution to those problems.

I also chose this field because of job opportunities. Food companies are among the largest on the planet, and we all know that people always need to eat. This means if you work anywhere along the food supply chain, you will always have a job. Although there are food companies that close or have layoffs, chances are you can apply your skills to other types of foods or processes, which I think is a huge benefit of this degree. If you study food biotechnology, you have a lot of career options that range from very basic science to applied engineering.

It offers a diverse environment for opportunities. There is no reason to limit yourself to lab work or a desk job. There is something for everyone, whether it be in quality, R&D, sales, marketing, manufacturing, teaching or in the government.

What are your plans after completing your studies in Russia?

I love learning. After I finish my Master’s program, I am interested in continuing my research and doing a PhD related to Food Biotechnologу.

What was the latest experience that made you stronger?

That’s an interesting question. When I arrived to Russia for the first time, it was very difficult for me to communicate with other people. There were a lot of communication barriers between me and Russians. I thought it was cultural or that I didn’t pay enough attention to learning the Russian language so I began to study Russian at Kazan National Research Technological University. Now I feel I have overcome the part that kept me behind because thanks to that experience I can speak Russian and communicate with people around me.