Emina Iskhakova: Just Choose What You Like and Do It

Coming from Central Asia, from sunny Uzbekistan, Emina Iskhakova is currently in her first year in the Intelligent Systems in Humanities program at ITMO where she focuses on studying the methods of collecting and processing Big Data. 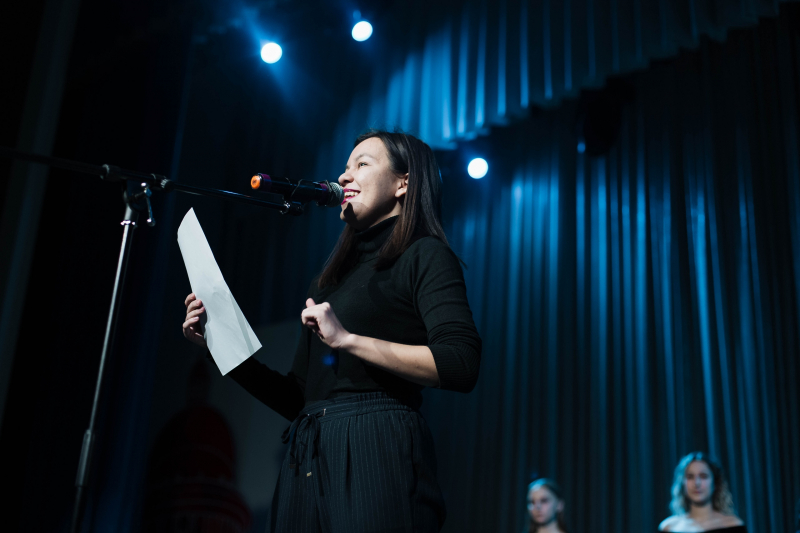 What were you doing before coming to St. Petersburg?

After finishing nine years of school, I decided to spend my next three years at the Tashkent Professional College of IT. But, as we all know, nothing happens by accident. During my college years, I participated in many projects as a volunteer and organizer. What impacted most of my future decisions was participating in the global educational competition Technovation Challenge 2018 where my team and I were trying to make a mobile app that was dedicated to young people taking care of the elderly. This year I will be an online judge for projects all over the world.

In my last year of college, I decided to move to Russia to study. In order to know everything about studying in Russia I visited the Russian Center of Science and Culture under Rossotrudnichestvo. There, we had extra exam preparation classes and different cultural activities. For example, students and staff held a big concert titled Boldinskaya Autumn, a celebration of the famous Russian poet Alexander Pushkin .

Why did you decide to enroll in ITMO?

My father told me about this university in 2018. He said if I wanted to work in IT, I should study at ITMO. That year I researched it, even participated in an online competition. After some research, I found out that such a program as Intellectual Systems in Humanities is unique. It is taught only in five universities in Russia, ITMO included. And, of course, I could not find any program in Uzbekistan related to Data Analysis. In 2019 I started to prepare all the documents and came to St. Petersburg in July. I tried many ways to enroll at ITMO: government scholarship from Rossotrudnichestvo – no success, essay competition – no success, and even portfolio contest – still no success. After all these failures, I was ready to give up and come back. But my father, who was here with me, supported me so much and I got enough points from the entrance exams and I stayed. All that time I knew that ITMO provides millions of opportunities both in science and social life: just choose what you like and do it! Now I am a part of the university’s dance team Flame, I participated in some contests like selection for Mister and Miss ITMO, went sightseeing with ITMO.Students, I’ve already volunteered in four projects and, of course, found a job at the Foreign Language Training Center. So, you can always find something here to work on.

What are your 5 favorite things about ITMO?

Working with awesome colleagues at FLTC (Foreign Languages Training Center), yes, I work there as a laboratory assistant), support for student initiatives, having a chance to meet international students to practice my English and French and a chance to stay at the university till 10pm and, of course, a unique atmosphere at each of the university’s buildings.

Was there something that surprised you about Russia?

Because of a similar mentality, I wasn’t very surprised. I just really liked that the city center in St. Petersburg is as busy at night as during the day.

What do people often tell you when they learn where you are from?

If it’s Russians, they often say that they’ve been in Uzbekistan at least once or they have a relative who was born there. This could be because Uzbekistan received more than one and a half million evacuees during World War II. People also mention juicy fruits and vegetables. Of course! We have at least 300 sunny days a year!

What can you say about your hometown? Could you describe a little bit what it’s like?

Tashkent is a city that harmoniously combines eastern monuments, soviet architecture and modern buildings. You can take a car or train and in less than 90 minutes you could find yourself at the foothills. I miss mountain trips so much! The best time to visit Uzbekistan is spring and autumn because it’s very hot in the summer. If you come to Tashkent, don’t forget to buy nuts at the Chorsu Bazaar; you can also go to the TV tower to get a panoramic view of the city. Also you should go to the State Academic Bolshoi Theatre of Uzbekistan.

If you had a time machine, which time period would you go to?

I would go to the future, maybe to the year 2101. It’s the year I’ll turn 100 years old. I want to see what things would be like, to what degree technology has transformed our world.

A dolphin. I like them very much even if I haven’t seen them in person.

Can you share a fact you just learned and think is interesting enough that everybody should know?

Any Twilight fans here? The author of the popular vampire series, Stephenie Meyer, announced the book Midnight Sun, told from Edward Cullen’s perspective, will go on sale this August!

How are you spending your time now in self-isolation?

I’m staying at home, of course! I do my homework and take part in online classes most of the time. When I want to get some rest, I do yoga exercises from Kronbars, I dance and watch movies in English. Sometimes productivity slows down and I let myself do nothing for some time.

I want every person to be happy and healthy. It might sound very non-realistic and childish, but I am letting go of this dream and giving it to the universe for it to come true.