Andrei Gomez: Learn English to Get the Most Out of Life

Andrei Gomez De Oliveira Giovanni is a Master’s degree student in Molecular Biology and Biotechnology at ITMO University. He is currently doing an internship at Embrapa Genetic Resources and Biotechnology (Brazil) where, under the supervision of Dr. Dmitry Kolpashchikov, his team is developing quantitative logic-gated DNA nanomachines designed to treat cancer. Andrey’s research focuses on improving the CRISPR-Cas9 methodologies to edit the bovine genome. 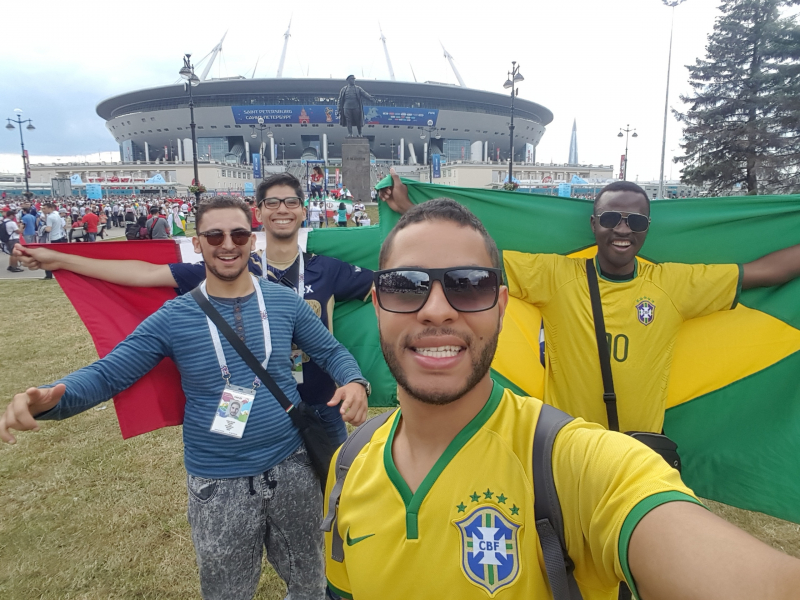 What was happening in your life before you came to Russia for your Master's degree?

In 2015, I graduated with a degree in biotechnology from the University of Brasilia in Brazil. During my Bachelor’s studies, I did a biochemistry internship at the University of Manitoba in Canada. My research focused on the structural characterization of monoclonal antibodies for cancer treatment using mass spectrometry. Forensic scientists use the same chemical analysis methods to identify and characterize drugs. When I moved back from Canada, I joined the forensic police institute in Brasilia as an intern. Later, I conducted forensic research and collaborated with Polish scientists at Jagiellonian University in Poland. Once I came back from Poland, I kept working with the Brazilian forensic police for an additional year until I did a Master's in biotechnology.

What were your plans for after finishing your bachelor's degree?

I knew I didn’t want to do a Master's in Brazil. Back in 2016-2017, Brazil’s government suffered a sudden political change because of the presidential impeachment. When the new party took over, they cut most of the educational budget. Thus, I looked for opportunities worldwide since the Brazilian government stopped offering national and international scholarships. Before coming to Russia, I studied in Canada and Poland. I was looking for a place that would challenge me, so I didn’t want to go to English-speaking countries. Also, I didn’t want to go to Spanish-speaking countries because I felt that would not be difficult and not different for me. When I found out about the Russian Ministry of Education Scholarship for international students, I thought that would be an exciting experience. After applying and going through an extensive selection process, I got the scholarship.

What is life like in Brazil? How is it different to living in Russia?

It's amazing. I feel blessed I was born in Brazil, people there are happy and friendly. The weather is great and there is no winter except in the very south of the country. So, people like to be outside, go to the beaches, practice sports, swim and enjoy the weather. Brazil is full of different kinds of music, dance and other traditional annual events. Hence, Brazilian people like to go out to dance local music like Brazilian funk, forro, sertanejo (nossa nossa assim voce me mata), pagode, samba, axe, etc. Since we have summer most of the year, there are plenty of outside cultural activities every weekend and huge live concerts with thousands of people. I don’t know how to explain it, but for enjoying life, Brazilian people know it all.

Is there something you miss about it?

Family and friends, but also Brazilian parties and food.

What surprised you the most about ITMO?

The amount of opportunities offered to the students is astonishing. I never thought I could take part in international exchange programs and internships. This shows how committed this institution is to being among the best universities worldwide. I am glad to be part of the ITMO family.

Why do you think your research is important and what benefits could we see?

With over 200 million bovines, Brazil has become one of the largest exporters of beef worldwide. It comes with challenges such as genetic and parasitic diseases in such livestock and may have a significant impact on bovine health, reproduction, growth, and productivity. Gene editing technology has the potential to overcome such limitations by deleting defective genes and inserting healthy ones and genes that produce therapeutic molecules to protect the animals from attacks by parasites. The addition of genes that promote cell proliferation such as growth factors might increase meat production. Other benefits would be the enhancement of protein levels in milk and the production of metabolites with therapeutic properties to treat human diseases.

I know you’ve been taking part in non-academic activities like the speaking club and movie nights. Why do you think these types of pursuits are important?

I used to be part of the speaking club team. English is second only to Chinese as the most spoken language in the world. However, as you may imagine, there are few foreigners speaking Chinese. So once you are out of your country, either an English-speaking country or not, most you are going to communicate with other foreign people in English. It is as simple as that. English is not my first language. If I tried to speak Portuguese in Canada, Poland and other countries that I visited it wouldn’t work.

In Russia it is challenging to speak any other foreign language than Russian. The same situation happens in Brazil. It is hard to find people who speak a foreign language, including Spanish, there. It is a choice, though once I learned English many opportunities came up that I wouldn’t have taken advantage of if I didn’t know English.

So far, I have received five international scholarships to study at different universities and countries worldwide. I am sure that if I didn’t know English, I wouldn’t be able to get the following scholarships after the first Canadian one. Learning English increases the probability of meeting people from many backgrounds, making friends, building confidence to travel the world, geting higher-paying jobs, having awesome experiences and enjoying life to the fullest.

Do you have any ideas for future activities in the international ITMO community?

Was there any role model for you in your life?

Growing up, I looked up to my mom. Most Brazilians do not have in mind things like dreams, grinding, a workaholic mentality, etc. We are very relaxed about these things. Most of the role models we have would be soccer players or actors. I never wanted to be like them. I'm going to keep following my path.

Have any of your dreams come true here in Russia?

Yes – I made it to the 2018 FIFA World Cup. The previous one was in Brazil, but I was living in Canada at the time and I missed it.

What do people often tell you when they learn that you’re from Brazil?

If you would like to know how far humanity is from designing babies, rewriting the code of life, creating X-Men-style mutants and increasing human longevity, I would highly recommend the Netflix series Unnatural Selection.