ITMO University has recently hosted SCAMT Workshop Week, an interdisciplinary workshop aimed at helping students acquire in-depth knowledge and practical skills in chemistry and biology, as well as work on their own project in the field of modern nanotechnologies. This year, a total of ten projects were presented at the workshop. Among the highlights are a nano-pharmaceutical drug, a holographic  protection  system, and a robot’s DNA. Organized at ITMO for the second time, the event brought together 55 Bachelor’s and Master’s students from 18 regions of Russia, as well as Ukraine and Belarus. 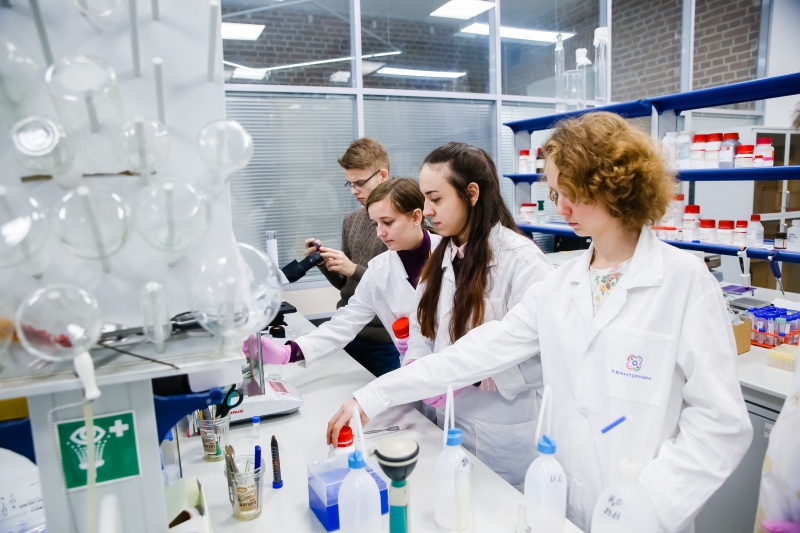 SCAMT Workshop Week is held twice a year. The first SCAMT Workshop took place in a summer school format in June 2018, when it drew some 30 participants, who carried out eight different projects. This year, the event’s coordinators reviewed almost 350 applications and chose 55 students from Russia, Ukraine, and Belarus.

“The selection process is probably one of the hardest parts of the job. Of course, we could have only invited the strongest students from Moscow and St. Petersburg’s top universities, but we wanted to strike a balance between different regions. Next summer, we plan to hold our workshop in English to attract international students. Apart from that, we do our best to cover various fields ranging from chemistry to biology. And last but not least, we aim at students with different levels of training, from first-year Bachelor’s students to second-year Master’s students,” comments Polina Khapaeva, the Development Director of ITMO’s ChemBio Cluster.

Among the workshop’s partners are such companies as Holy corn, Red Bull, Fruttis Russia, Komus, Dia-M, and the Mendeleev 150 Conference.

The format of SCAMT Workshop Week

In a course of a week, from Monday to Saturday, students worked in two directions: first, they attended lectures on various applications of nanotechnologies, partook in workshops on public speaking and familiarized themselves with the industrial projects carried out at ITMO’s SCAMT Laboratory. And second, students were split into groups, each given a project to work on. The main task here was to find a practical solution to the problem given and defend their project during a public defense. Each group was assigned with a mentor (a postdoctorate researcher, or a Master’s or PhD student).

A total of ten projects were presented at this year’s workshop: the participants attempted to create a new nano-pharmaceutical drug, print a holographic image, control a microbial community, construct a robot’s DNA, and create a luminescent cobweb, as well as learned a lot about molecular processes modeling, molecules visualization, and drug delivery (you can read about the projects in more detail here).

In this interview with ITMO.NEWS, SCAMT Workshop Week’s participants share about their experiences.

I have always loved trying my hand at different things. That’s why I decided to take part in this workshop, as it offered me an opportunity to familiarize myself with various SCAMT projects, as well as make new friends and establish useful connections.

I was placed in a group that focused on microbiology. We studied microbial biofilms and the effect nanomaterials have on them, in particular. The thing is that it is pretty difficult to reach the bacteria in these biofilms with antibiotics, but this problem can be partially solved by the use of nanomaterials. These materials initiate the transfer of genetic information inside the films, and we can take advantage of this characteristic. For example, we used nanomaterials to transfer a plasmid carrying an antibiotic resistance gene from one bacteria to another.

Elisaveta Kulaeva, a second-year student at the Academy of Biology and Biotechnologies at Southern Federal University

Thanks to this workshop, I learned a lot about ITMO’s Master’s programs. In my opinion, it’s very important to know in advance about in what field you want to pursue your future career, and that’s where the experience of participation in such events can come in handy.

The project my group is engaged in has to do with DNA-based machines. We create these machines and study how they split RNAs. We are all given the same task that we have to perform on a certain DNA machine and its target.

What I like the most about the workshop is that it’s really practice-oriented. Not all Russian universities can boast such cutting-edge equipment as ITMO.

Uliana Alevskaia, a first-year student at the Faculty of Food Biotechnologies and Engineering at ITMO University

I knew about ITMO’s SCAMT Laboratory long before entering the university, so I was very excited when I learned about the workshop. I’m in a group that is developing a biofuel cell energy system. For instance, we study the ways of extracting energy from cellulose.

As I’m just in my first year at the university, I still have a lot to learn, as well as understand what my research interests are. This workshop gave me a chance to get valuable practical skills and communicate with many talented students from various fields.

Tatiana Pristinskaia, a third-year student at the Institute of Natural Sciences at Udmurt State University

My group works on the development of nano-pharmaceutical drugs. Actually, we have a very tight schedule: we attend general lectures in the morning, then we listen to field-specific lectures, and then goes the practical part. At the end of each day, we discuss the results with our group coordinator. The purpose of our project is to come up with a new targeted anticlotting drug delivery method. My research project at the university is also dedicated to this, so the knowledge that I receive here will definitely come in handy in my future studies.

The project I work on as part of the workshop has to do with holographic protection methods. What do we need it for? We all know about holograms; they are extremely interesting and versatile. However, unfortunately, they are also very unstable, as your every touch leaves stains, which just ruins the whole thing. To avoid it, we cover our holograms with titanium dioxide, which creates a protective layer. Thanks to this layer, the hologram will still function properly even if we stain it with something.

Olga Sokolovskaia, a fifth-year student at the Faculty of Chemistry at Belarusian State University

The project I’m busy with at SCAMT Workshop Week has to do with metal-organic frameworks (MOFs). MOFs have multiple applications. Among them is targeted delivery of anticancer drugs to tumor vessels. We’re now synthesizing these substances, and then we’ll infuse them with the drug and watch if it works. Then we’ll have to present our project to the event’s coordinators and other participants.

At my university, I specialize in polymeric materials, but it’s not completely my thing. Now I’m thinking about continuing my studies here, at ITMO University. That’s why I came here in the first place, to see the situation from the inside, learn more about the laboratory’s projects, and talk to its researchers and students.

Olga Platonova, a second-year Master’s student at the Faculty of Biology at St. Petersburg State University

I see SCAMT Workshop Week as a chance to broaden my horizons and learn about other research fields I might be interested in. I’m a microbiologist through and through, so it’s only natural that my project at the workshop has to do with microbiology, and in particular, with the use of ultrasound to enhance the effectiveness of antibiotics. This sphere had great potential in medicine and science in general. What is remarkable about the workshop is that it helped me obtain the valuable experience of working with new methods I’d never used before, for example, ultrasound.