Seven Sins of Our Memory or Why We Forget Things

What do scientists know about the way our memory works? Which part of the brain is responsible for the process of remembering? Is it possible to remember everything or at least not forget the important things? Polina Krivykh, a psychophysiologist, popularizer of neuroscience, and author of the book Where Are My Glasses and Other Stories About Our Memory answers all these questions. 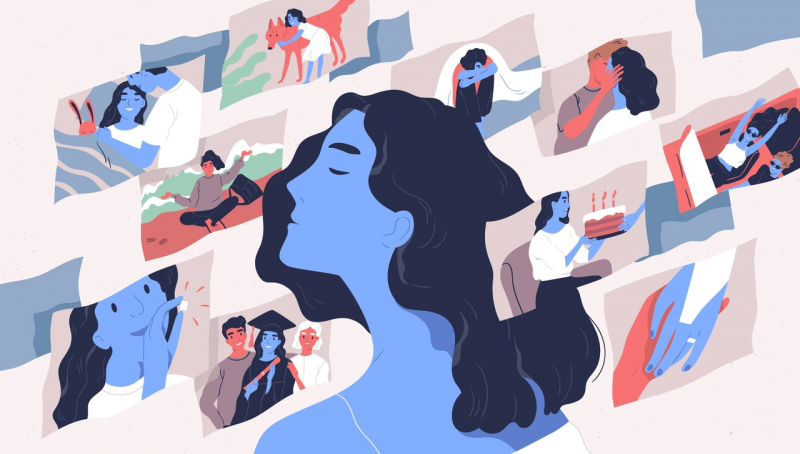 The following article is a recap of Polina Krivykh's lecture about memory that has recently taken place at the Nekrasov Central Library.

Memory and its functions

Memory was one of the first cognitive functions that scientists began to study simply because it was the easiest to approach. Scientists struggled to find an experiment that would allow them to study attention or thinking, and at that time there were no MRI or EEG. But studying memory was quite simple – for example, you could let people memorize sets of words, a sequence of numbers, poetry, etc.

Now, memory is defined through its functions: storage, consolidation (the process of transferring information from short-term to long-term memory), retrieval, and forgetting. Forgetting is also a full-fledged function of memory, and it’s quite important.

Memory is most often compared to a warehouse or library where each book is responsible for a separate story. The only problem is that there is no catalog in this library, and most of the books are in random order.

People’s complaints may arise from irregularities in the process of storing or retrieving information. Continuing with the analogy of a library, the problem may be either that you learned some fact but didn’t place it on a shelf in your library or you have, but you have no idea where exactly.

There is also such a curious phenomenon as reminiscence – a sudden remembrance of a memory or a piece of random information. It's as if you were walking through your internal library and suddenly a book fell on your head. Now you know exactly where it is, and you can return to it again and again.

Scientists have tried to figure out whether our memory has any limits. Today, we know that our internal library is endless thanks to Solomon Shereshevsky, whose case was thoroughly investigated and described by the famous Soviet neuropsychologist Alexander Luria.

Dr. Luria had spent 20 years trying to find the limits of Shereshevsky's memory, but it turned out that the latter remembered absolutely everything that had happened to him. For example, even after 17 years, he could accurately reproduce the list of 100 words that the scientist gave him at the very beginning of his research.

Shereshevsky's ability is called hypermnesia, and of course, it is not the only case known to science. This phenomenon let us understand that our memory resources are unlimited. But hypermnesia also has numerous side effects (besides causing people to remember the moments they would love to forget).

Shereshevsky suffered from prosopagnosia, or face blindness – he couldn’t distinguish and remember the faces of people. And he also couldn’t make logical constructions, generalize information, and draw conclusions. The memory of people with hypermnesia resembles articles from Wikipedia – they are filled with information and facts, but it is impossible to use them for a full-fledged book.

At that time, unfortunately, there were no such technologies as MRI and EEG yet, so his brain was not thoroughly studied. Scientists are still trying to figure out where our memories are stored, but we do know which part of the brain is responsible for the formation of our memories, their consolidation to long-term memory, as well as their retrieval. All these functions are performed by the hippocampus, a major component of the brain named partly for its resemblance to a seahorse (which “hippocampus” stands for in Greek).

Scientists learned about the hippocampus thanks to the patient widely known as H.M, which is how he was called in the scientific literature, though his name has since been declassified. Since childhood, Henry Molaison suffered from severe epileptic seizures. Over the years, his illness progressed, seizures happened several times a day, and drug treatment did not yet exist. Medical specialists offered him to undergo a surgical operation to remove the part of his brain that was at fault –  the hippocampus.

Right after the surgery, it became clear that the patient’s memory was irreversibly impaired. He could still recall his childhood memories and recognize his family and friends, but he was unable to form new memories. Every morning, he woke up thinking that he had just had an operation, and several times a day he became acquainted once again with his attending physician and medical staff.

Further tests showed that H.M. retained the ability to acquire new motor skills. So, he was taught to draw a complex figure through a reflection in a mirror, and with each attempt, he got better and better. And it amazed him because he was sure that he was doing this exercise for the first time. It was later revealed that another brain structure, the cerebellum, is responsible for motor and muscle memory.

Afterward, there were not many studies of people with damaged hippocampus, mostly because such operations are no longer performed. However, a study of the brains of patients with Alzheimer's disease has shown that the associated memory problems are caused by destruction of the cells in the hippocampus.

The seven sins of memory

Daniel Schacter, an American psychologist and Harvard University professor, studied human memory for many years and eventually formulated the seven sins of our memory.

The first sin is transience – that refers to a weakening, deterioration, or loss of a specific memory over time. Once you have learned new information and put the book on the shelf in your internal library you will remember well enough where this book is for a while, and you can easily turn to it again. But the more time passes, the weaker your memory becomes, and it takes more and more effort to retrieve it again – and then the memory may disappear altogether.

At the same time, things that we would like to forget, on the contrary, we remember too clearly – Schacter called this sin persistence. The problem is that the stronger our desire to forget something, the more attention we pay to this memory, playing it over and over again, and thus preventing it from fading.

The third sin is suggestibility: we can easily believe in something that actually did not happen. For example, if we add some new detail to our story, then later we will remember this change. After several iterations – repeated retelling of the story to different people – the memory of the story can change beyond recognition.

Another way to change the facts, which is often used by our memory, the scientist called the bias. It is so important for our brain to maintain a holistic picture of the world that it can easily correct our old memories in accordance with new views. For example, we can change our minds about some people and immediately forget what we thought about them before.

Memory is closely related to another cognitive function – attention. The sin of absent-mindedness often lets us down during conversations: if we get a bit distracted, we no longer remember what the other person just said to us.

Blocking is a primary cause of the tip-of-the-tongue phenomenon, which is directly related to the imperfection of the process of extracting information from memory. It's as if we were looking around through the shelves in search of the necessary book knowing for sure that it should be here somewhere, but we just can't find it.

The last but not least is the sin called misattribution – that is, our tendency not to remember where we acquired this or that information. This is just a way in which our brain tries to save its resources, but it can also lead to rather unpleasant consequences.

Our memory is, of course, imperfect, and that’s just the way it is. However, there are some ways to train it. One of the examples is the American journalist Joshua Foer who, in just a year, trained his brain so that he could win the USA Memory Championship and break the record for memorizing cards. In his book Moonwalking with Einstein, he describes the entire process of preparing for the competition, mastering mnemonic techniques, and shows the infinite capabilities of our brain – if only you learn to structure information and, of course, train a lot.

Mnemonic techniques have been around since ancient times. The oldest one was described by the famous Roman orator Cicero. The basic idea of this mnemonic technique called the method of loci is to imagine yourself placing all the needed information in a certain location such as your own apartment, yard, or part of your commute. Each memory has its own place, which makes it easier for you to find it when needed.

The second well-known memorization technique is based on the principle of restructuring information into a more convenient or interesting form. For example, a sequence of random numbers can be thought of as dates of memorable or historical events, and word lists – as associated visuals. Information restructured in this way is much easier to reproduce.

It is important to remember that no mnemonic technique guarantees instant results, as these are the tools that take a long time to master.

Nowadays, apps that supposedly help develop memory and other cognitive functions are extremely popular. But the scientific community has not yet concluded whether they are helpful or not. So far, all the research has shown that by doing such exercises every day, you only develop the skill of completing this particular type of task. For example, if people have learned to memorize sequences of numbers well, then in life they will be able to remember phone numbers or PINs – but overall, their memory will not improve.

A full recording of this lecture (in Russian) is available here.