The third interview of the ITMO.EduLeaders Winners series stars Alexey Peregudin, an assistant at ITMO’s Faculty of Control Systems and Robotics, who shares more about how he got into teaching, why he doesn’t hide his student mischiefs, and what he’s planning next. 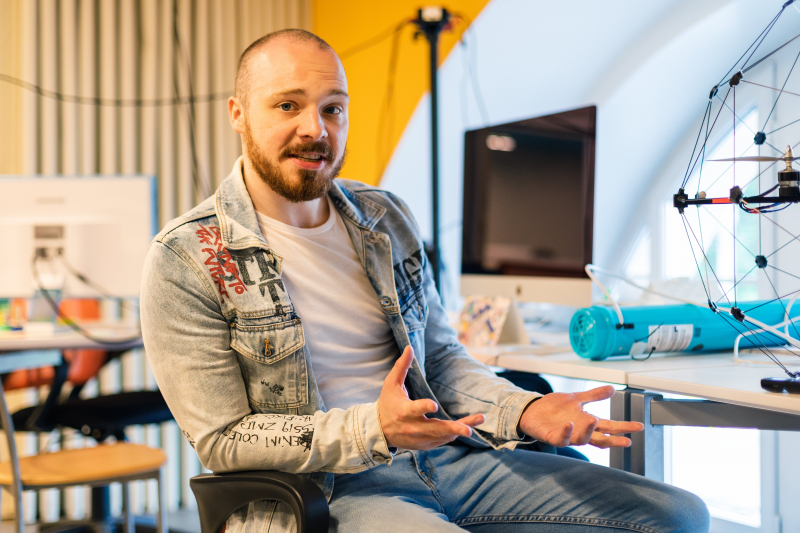 How did you get into ITMO?

In 2011, I became a Bachelor’s student at ITMO. Like many in Russia, I looked for a university with a military department (since military service is mandatory in Russia, such departments offer to do your service while at university – Ed.). My parents insisted on a tech major rather than, say, management, and they were damn right! During my studies, I came to realize that I have a knack for mathematics and physics.

What did you study?

However, it was for the better as I had to study hard on my own and it was way more interesting. That’s why I’m into the idea of students taking on the role of teachers. This way, they learn much more. I stand by this as I didn’t get much out of the university.

How did you start teaching?

When I finished my Master’s program, I realized that I wanted to stay at the university. I felt great in the academic environment. To do so, I decided to apply for a PhD and start teaching. At that time, I had already won several competitions and had other achievements. So, I talked to the dean of my faculty and he offered me to teach an intro course for first-year students. At first, I did it together with Alexandr Kapitonov. It was a great experience!

You know firsthand that it can be hard to keep students engaged. What’s your secret?

I have no idea! (laughs) My students see how passionate I am about my work. I’m not a boring lecturer who reads off from books and I’m not afraid to admit that I don’t understand something. It seems that students are more interested in getting a personal touch from their teachers. This way, we have a more lively interaction. But I have no exact formula.

What should teachers avoid in their practice?

Students cut classes that are boring. I think that it’s high time for new teaching methods that go beyond typical lectures, notes, and tests.

My course has always been theory-oriented and I think that it'd be great to use robots, videos, and all sorts of stuff in classes to engage all of the senses. If you only relate the logic, you will capture a very small fraction of your audience.

While many teachers complained about remote work during the pandemic, you created an online course, which brought you a victory at the ITMO.EduLeaders competition. Would you say that you have gained from this situation?

Of course, I have. It was hard at first when it wasn’t clear how distance learning would work and what platform teachers would use. It was something new and scary. As I had no idea how to launch a YouTube channel and organize live streams, I had to figure it all out by myself and build up the nerve to make the first video. After that, everything ran like clockwork. Surely, I had some difficulties along the way but it was still a win for me.

At the ITMO.OPEN: Educational Practices conference, you said that your online lectures would be useful in post-pandemic times, as well. Do you plan to stick to this format?

Yes, I do believe that these lectures will be of use even after the pandemic. They provide visual content. Of course, you can use presentations at your lectures but it’s different, better when it’s online. Moreover, your lectures will always be available. Your students and even students from other universities can access them at any time.

I like this project but for now, I’m engaged more in other practices. Yet I’m planning to get back to it in the next semester. I believe that this format works great for lectures, while practical classes can’t really do without face-to-face communication. So, it’s worth a try.

Following the student-oriented approach, you have to stay on the same page with your students. But what’s going to happen when other generations enter university? These are people who are much younger than you and grew up with different cultural references. What will you do?

I don’t know yet but we'll see (laughs). Right now, I feel that I’m getting older than my students but I am also more experienced, so I have no problem with being in tune with them, it happens naturally.

How do you keep your learning going?

I read books and watch educational videos as my field, the theory of automatic control, is rather specialized. At the same time, I’m in a PhD program at ITMO and about to defend my thesis.

I’m trying to figure out how to make a robot remain in place when exposed to external disturbances. Let’s say, you have an unmanned ship, it’s affected by waves and has a malfunctioning GPS, so it can’t define its location correctly yet it has to maintain its position within the smallest possible area. And I’m confident that it is possible to make this ship stay within such an area in the given conditions.

It’s just one of the examples, but generally the maths I deal with can be applied to drones affected by wind and other systems, too.

There is also a myth that people engaged in control theory aren’t so good with technologies and can’t build a robot themselves. Is it true?

In my case, yes. I’m a true theorist, and it’s only thanks to my students that I put my knowledge into action. For instance, I showed them a rotary system, with its frequency responses, impulses, and so on. I tried to demonstrate everything I learned on a robot.

How do you relax?

I play quaternity chess. This is a unique four-player game resembling real life while ordinary chess is more like a war: if one gains, another loses. It’s another thing when there are four players. Here, if you put someone at a disadvantage, it doesn’t necessarily mean that you will gain something. All players interact with each other and collaborate from time to time. This game boosts a wide range of skills.

Do you play for yourself or take part in tournaments?

I do participate in tournaments and usually take second place. However, this game isn’t so popular yet: even international competitions bring together no more than 40 people.

Do you have any other hobbies?

In my spare time, I study mathematics. Soon, I’ll finish my PhD and I know exactly what I’m going to do next. When reading specialized literature, I always make notes on paper. So, I have a stack of such sheets that I then try to make use of. Control theory is both my hobby and my life.

I also have some ideas for future articles. They need some polishing but I’ll do it as soon as I have the time. Take the ship, for example, that has to stabilize in a small area when rocked by waves. You have to take my word for it but I think that it’s incredibly interesting to figure out how this area can shrink if we got the frequency spectrum of the waves. If we know that our object moves from this to that frequency and so on, how small can it be?

Why did you decide to apply for the competition?

Someone told me to try. They said that I have an amazing channel. Do I, though? There are only six or eight videos but people still somehow like them. So, I decided to give it a try. I liked the idea of this competition and I also enjoy being on stage.

Did you expect to win?

I thought about it. But although my project was good, I didn’t know what others had. That’s why I wasn’t that surprised but I think I’d not be upset if I lost.

What does this victory mean to you?

First of all, I feel the responsibility. I got this prize for what I did in the past: my last video came out in December 2020. I feel that I should do more. So, I think I need to make more videos and improve their quality. Now that more people know about me, I have to get better, as well as improve my teaching and organizational skills.