ITMO University has recently hosted a summer school for young scholars striving for international recognition. The school participants defended their roadmaps for developing world-class laboratories in their regions and shared their impressions with ITMO.NEWS. 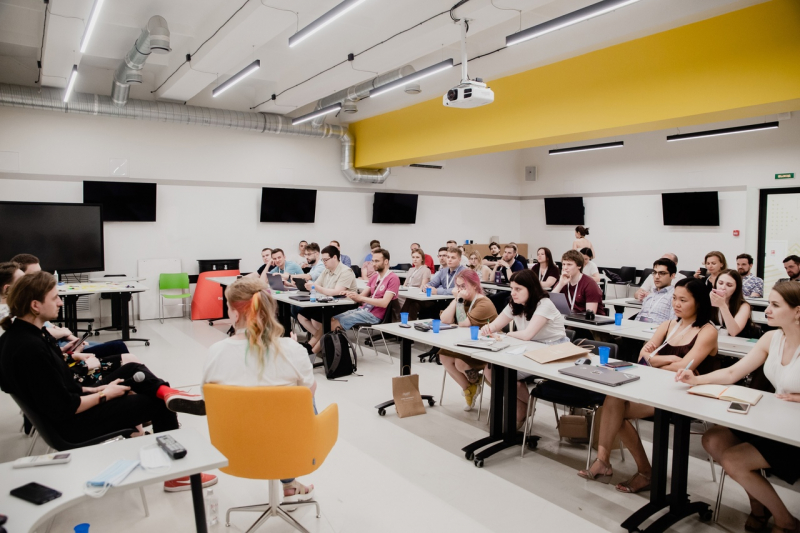 June 25 marked the end of the first-ever ITMO’s school for future principal investigators. One of its initiators, Vladimir Knyaginin, Vice Governor of St. Petersburg, met with the students at the opening ceremony and their defense.

The PI School brought together young scientists holding a PhD degree from 30 Russian regions. Within five days, speakers from various universities and academic institutions talked about the laboratories of the future focusing on the topics of cutting-edge science, young people in research, innovative management practices, business and education cooperation, and in-demand specializations.

“Everyone agreed that it was an amazing event that had clearly struck a chord, while some even noted that it far exceeded their expectations,” says Polina Khapaeva, one of the event’s organizers. “Many thanked us for inviting scholars from various fields. The school has set the ground for bringing forth new ideas and projects. Yet we’ll be able to fully observe its results only in the near future.”

On the last day, the school’s participants presented their roadmaps and described how they plan to create a world-class research team within the next five years.

Before the students left St. Petersburg, ITMO.NEWS met with some of them to learn more about their experiences.

Anton Popov, the Institute of Theoretical and Experimental Biophysics in Pushchino

I’m a senior research associate at the Institute of Theoretical and Experimental Biophysics in Pushchino, an important scientific center in the Moscow region. Lately, I’ve been thinking about my future and creating my own laboratory. Right now, I do have a team and together we study various kinds of biological activity and nano- and biomaterials for anti-burn, radiotherapy, and cell technologies. However, this is not a laboratory yet.

At some point, I got an email about the PI School, an amazing opportunity to visit St. Petersburg, listen to the topics that interest me, and learn handy lifehacks. I hurried to submit my video application.

Overall, I’m happy with the school. It was very well arranged. The lecturers shared their visions of the current situation, prospects, and science policy, as well as elaborated on the scientists of the future. Thanks to the school, I picked up a few lifehacks for the startup I am working on and met like-minded people. It’s amazing to be surrounded by top-tier scientists. All participants are young, actively engaged in science, and open to new contacts. Such schools are great platforms for networking.

Alexander Kvashnin, the Skolkovo Institute of Science and Technology

Since this year, I began to think more about how I can create my own research team, laboratory, and so on. I started participating in various projects on leadership skills. Once, I came across a Facebook post about the PI School. I got interested in the school, its topics and invited experts, and decided to apply.

Most of the situations that were discussed during this week I’ve already experienced firsthand. And although I had more background than other participants, I still had the chance to learn something new and, most importantly, the school showed me that I’m on the right path. In terms of organization, I enjoyed the format, it went quite well.

I’m engaged in the field of computer modeling of novel materials and their properties, and I see my future laboratory dealing with the modeling of materials with desired properties for the industry. Thus, it will become a link between science and industry.

So far, I’ve been struggling with starting a dialog with the industry. It’s not that easy and requires certain experience. And the PI School helped me get closer to my goal. I understand now that you have to go out there and try. The main thing is that you have to talk to everyone. Don’t make a list of the top people to reach out to but talk to everyone and choose from those who have agreed.

I head the laboratory for the physical properties of micro- and nanostructures at the Irkutsk National Research Technical University. At the moment, we’re working in two fields: thin films for spintronics and high-temperature superconductors.

I learned about the school from the vice-rector for research at my university who contacted me and said that they wanted me to represent the university at this event.

The PI School is a unique opportunity to learn how to build a team. There, I had the chance to take a critical look at the work of our lab. Perhaps, I’d like to take a more interdisciplinary turn and even collaborate with the school’s participants once I am back in Irkutsk. At the school I met colleagues working on related topics that can potentially become major projects.

I heard about the PI School from my colleagues. After studying the school’s website, its tasks and topics, I started to prepare for the school: gathered the needed documents, made a video, and so on.

I’m most interested in applying various physical and physico-chemical techniques to create materials with unique properties, namely, the use of laser technologies. If I had my own laboratory, I’d like to continue developing in this field. I don’t know yet whether I want my laboratory to be at a university or the institute as both have their own pros and cons.

The school gave answers to all my questions and made me revise my approaches to building research teams. I am no longer afraid of teaming up with young people, I want to work closely with the industry, and know how to manage my future team.

I learned about this opportunity from the announcement that was posted at our institute. I sent my application and was accepted. Why did I decide to apply? I loved the very idea of this school – it’s unique and I don’t remember anything like this in Russia. I was excited to participate and listen to other people’s opinions.

I was interested in ITMO, too. Before that, I thought that ITMO was a university for programmers and was happy to learn that there is also a chembio cluster. I wanted to see what it is like, and how people work and live here.

The school was a useful experience. Firstly, it helped me organize and structure my knowledge. Secondly, the school allowed me to fully unleash my potential and, finally, I received a wide range of helpful tools that I can put into practice. Yet not all of them are well-suited to the academic environment but we’ll see what they amount to in practice.

The focus of my future laboratory will probably be on non-coding RNAs. It will most likely be established within a university as I’m not sure whether it can be done at the institute or not. Perhaps, I’ll have to search for a new platform for development. However, I’m confident that the developed skills will help me achieve my goals.

As noted by the organizers, ITMO University will stay in touch with the school’s graduates and continue helping them bring their projects to life. Some participants will receive mentor support even after the school, if necessary. It is also planned to organize new schools for future leaders and employees of world-renowned laboratories from various regions of the country.

The PI School took place at ITMO University on June 21-26. Out of 150 applicants, only 40 most promising scientists got the chance to study at the school. The event was sponsored by Evrogen, a Russian biotech company, and Dia-m, Russia's largest supplier of laboratory equipment, supplies, and reagents.