Academic Corporations, Not Universities: Skolkovo Institute Head Andrey Volkov on the Future of Universities and PIs in Russia

A series of open lectures was held as part of ITMO PI School: Rising Stars on May 18-19. The event brought together leading experts from the Skolkovo Innovation Center, academia representatives, and ITMO research leaders to discuss which specialists universities need and how Russian science and education sectors are transforming in general. One of the speakers was Andrey Volkov, the head of Skolkovo’s Public Strategy Institute, a professor at the Moscow School of Management, and a supervisor of Project 5-100 and the Priority 2030 program, who spoke about how the transformation started, how universities are changing today, and why they should evolve into academic corporations instead. 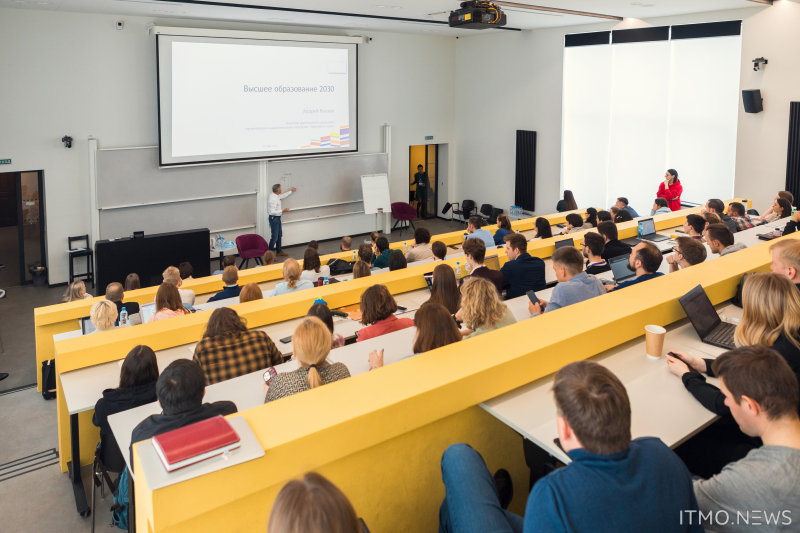 Science resembles industry more and more today. With ever-increasing societal demands and competition, universities and scientific organizations cannot but take their research and technologies to the next level. How can it all be achieved? Who should initiate cutting-edge research? And how can these studies be conducted in today’s social climate? These and other more complex tasks call for novel leaders who will take full charge of managing scientific projects. Not only will they set objectives and hypotheses, as well as supervise projects, but also recruit and manage teams, collaborate with companies, and take part in educational processes.

All this is a job for principal investigators (PIs). This position is already fairly common in many countries, however, not in Russia yet. The question is: can such specialists be trained here and what kinds of skills should they possess? As noted by Andrey Volkov, aspiring PIs have to go all the way through from a theorist, an organizer, and then a manager to finally become a technological entrepreneur. The speaker stresses that this is not a linear but a topical route meaning that specialists can take the necessary steps in any order they like, come back to previous tasks, change their teams, and review their tasks.

At the same time, PIs should have a set of different competencies and personal traits under their belts. They should be great theorists, be well-trained in their field, have organizational and management talents, as well as understand the market’s needs and be able to come up with life-changing solutions. As one person may not have these characteristics all at once, PIs usually have to review their priorities throughout their careers. For instance, they might have to delegate some of their long-standing projects.

On top of that, modern science is built on different role models. Researchers cannot devote all their time to developing a brilliant theory without thinking about its practical applications, says Andrey Volkov. Today’s scientific activities cannot do without collaborations, including with the industry.

Not only science but also education changes. Modern universities are nothing like the ones that were there 20 years ago. The global transformation kicked off as early as 2004 with the Federal University project, followed by Project 5-100 eight years later and Priority 2030 in 2021. From the position of someone involved in all these processes, Andrey Volkov shared the prerequisites behind these changes and compared Russian and international education models.

When working on the Russian transformation program, the experts relied on the experiences of China (with its Soviet-like education system), France (this is the only country, apart from Russia, that has both academies of sciences and educational institutions, following the model established in the 1930's), and Germany (with its highly efficient university operation model).

Just like the Soviet Union, China practiced specialized education until 1995 when reforms started. The transformation took around 20 years and cost 50-80 billion dollars. Yet all the efforts paid off and ever since, China has been home to a plethora of innovative universities, which surpass the oldest universities in the UK and USA on international rankings.

Germany introduced educational reforms in 2007 aiming to create consortia of research centers, universities, and technological companies. The reforms resulted in 52 consortia, with each meant to solve a certain research or technological problem and their research funded by the state. Andrey Volkov believes that this exact model is a way forward that should be adopted by Russian universities as part of the Priority 2030 program.

The French experience, on the contrary, served as a counter example. France tried to unite science academies and universities via joint endowment funds offered by the state. However, this attempt turned out to be unsuccessful. Most participants received funding yet did not bring any fruitful results.

According to Andrey Volkov, all the federal projects, including Project 5-100 and Priority 2030, encourage universities to move away from the Soviet model and introduce the ones implemented by today’s most influential universities. He also noted that this transformation takes place naturally within universities themselves, and ITMO proves it vividly.

The major outcome of this global transformation must be the establishment of the University 3.0 that will become a powerful entity for producing scientific knowledge, top-notch specialists, and innovations.

University as a corporation

According to Andrey Volkov, the financing system needs to change, too. The situation at the moment is that most universities still depend heavily on state funding (which amounts to ~57% of their total budget). At the same time, profits stemming from the production of knowledge (R&D, scientific and engineering services, intellectual and creative properties) amount only to 7%. For comparison, universities in the USA and China make 14 times more off of their R&D projects.

Ideally, the expert says, the model should look like this: 40% state funding, 30% from research and R&D grants, and 30% more from contract-based education, sales of innovative technologies, and so on. All this should result in the creation of strong universities capable of producing their own innovations; in other words, universities as corporations.

“To me, the word “corporation” doesn’t mean KPIs, reports, a board of directors, and all that. To me, it’s closer to the Latin word “corpus” (Lat: “body,” “substance,” “structure” – Ed.), meaning a community of experts who define the spirit and the nature of this corporation. A corporation has three products: its scientific knowledge, its educated and well-trained staff, and the technical knowledge that has a qualitative effect on life – put simply, innovations. There are few such universities in the world, but they are out there. My favorite example is KU Leuven, which was ranked as Europe's most innovative university for four years straight. It’s difficult, but possible,” says Andrey Volkov.

But who should be making the important decisions at a university? In response to this question, the expert brings up The University: An Owner's Manual – a book by former Acting President of Harvard and Dean Emeritus Henry Rosovsky. The book offers three options: the administration, the students, or the teachers. In the medieval times, universities belonged to the students – even the rectors were chosen from among their number. At the oldest universities of Europe and the USA (such as the aforementioned Harvard), the power lies in the hands of the teachers. At most Russian universities, the administration is in charge, but the situation is changing. At Skolkovo, for instance, the deciding power is with the heads of educational programs. This is because the university relies on itself for funding and therefore on the skilled lecturers and well-developed programs that would attract the prospective students. This, believes Andrey Volkov, is the point of all reforms and changes:

“I want universities to be cool, prestigious places for self-fulfillment, places people would be eager to get into and not get out of. The global competition between universities is about who can offer the best conditions. And the potential for students’ personal development and success is the chief factor that determines a university’s appeal. You won’t disagree, after all, that ITMO strives to attract the best people and win them over from others. And the stronger a university is, the more concerned it is with this goal,” concludes the expert.