In mid-August, the Tochka Kipeniya (Boiling Point) platform based at St. Petersburg State University of Aerospace Instrumentation hosted the International Conference of Augmented and Virtual Reality Technologies in Creative Industries. The event was held within the cross-border cooperation program Interreg Baltic Sea Region 2014-2020. 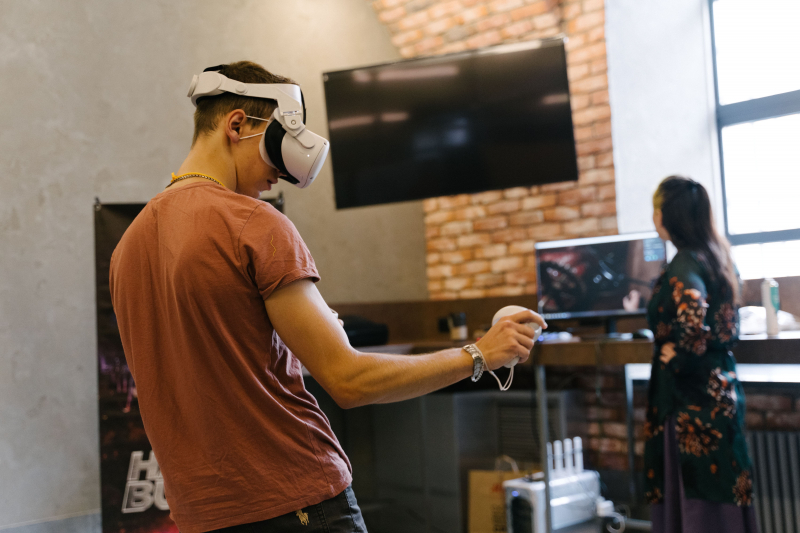 The educational part of the conference was devoted to the present and the future of AR/VR technologies. Experts, including company representatives and specialists from ITMO University, FEFU, and SUAI, discussed their applications in the industry, education, and art.

Maria Kobyakova, creative director of Haptic.Team, presented various examples of successful application of AR technologies in public spaces and city events. Thomas Bremer, a professor at the Game Design Department of HTW Berlin, held a workshop on how VR/AR technologies can help to preserve and promote cultural heritage. Selena Volkonskaya, deputy head of the New Stage of the Alexandrinsky Theatre, founder and curator at the New Media Laboratory, demonstrated the theater’s VR/AR-related projects. Sergey Zakharov, creative producer of the Super8 studio, shared his experience in creating large-scale projects, including Hermitage VR and ones for the JetBrains museum of advanced technologies and robotics.

ITMO University was represented by Artem Smolin, head of the Center of Usability and Mixed Reality at the Faculty of Software Engineering and Computer Systems, Andrey Karsakov, head of the Interactive Visualization Laboratory at the National Center for Cognitive Research, and Nadezhda Bey, a practicing VR artist and student of the Art & Science Master’s program. ITMO students of the Computer Technologies in Design Master’s program also presented several projects, including a VR sequel to the Well, Just You Wait! game (1984).

Read on to learn what the participants think about the future of VR and AR and how to make these technologies more inclusive for people.

At the conference, I spoke about the various projects on AR technologies in public events that were implemented at our laboratory. For instance, we provided the visuals for the opening ceremony of the Minsk European Games and the finals of WorldSkills in 2019 and did a project for the international tennis tournament St. Petersburg Open. On top of that, we were part of the Thirty-Three Characters project for the Manege Central Exhibition Hall. Our laboratory has been engaged in similar projects for several years.

The thing is, AR is extremely popular right now but not everyone can use it. This is a highly promising tool in terms of day-to-day life. However, it requires advanced technologies, and, unfortunately, even modern smartphones do not fulfill all the needed requirements.

The technology has come a long way within the industry, too. It’s used to train staff, simplify warehouse operations, and for other practical tasks. AR is being used more and more on television for streaming and live footage. In my opinion, this trend will strengthen its position in the industry and pave the way for more affordable and simpler tools.

I believe that it will take one easy-to-use device from a tech giant to make the AR/VR technologies widely common in the next five to ten years. Right now, the field is more about enthusiasm and one-off experiments – and hence the remaining wow-effect.

I delivered a talk about my experience with VR and related experiments I’ve done over the past year. I have gained valuable background through trial and error and conducted unique experiments while working in this field. I also touched upon the prospects of VR art: the demand there is for it now and the possibility to sell it on the NFT crypto art market.

As such technologies are still considered new and innovative, the market demand for them keeps growing. Every time I post my artwork, I get lots of comments from people saying that they’ve never seen anything like this. People are interested in something they know little about.

Even though the technology has been around for a while, it hasn’t resonated much until now. Today, we have more access to these technologies as the market offers low-cost headsets and new VR tools.

I talked about how we teach our students to use VR/AR technologies in their projects and presented several student ideas implemented within various grant programs in collaboration with other ITMO faculties and our partners.

Our students can choose any topic or field for their work, be it a game, an educational product, or an interface. One of our students created a remake of the Soviet game called Well, Just You Wait!, which was demonstrated at the conference. The game was well-received by both guests and our colleagues.

The more you demonstrate your achievements, the more responses you get, and it doesn’t matter whether there are 600 or 10 people in the audience. What matters is that that this way you create a certain community of experts and company representatives who can interact with each other. That’s the environment where joint projects (commercial, creative, or grant-based) are born.