Established in 2005, World Usability Day started a series of thematic events around the world meant to serve as a platform for specialists in human-computer interaction and UI/UX where they can exchange their knowledge, opinions, and cases. One of such events is the International WUD@ITMO Conference recently held for the seventh time at ITMO University. Read on to learn what topics the conference addressed, how inclusive interfaces are created, and what are the best design tools for UX professionals. 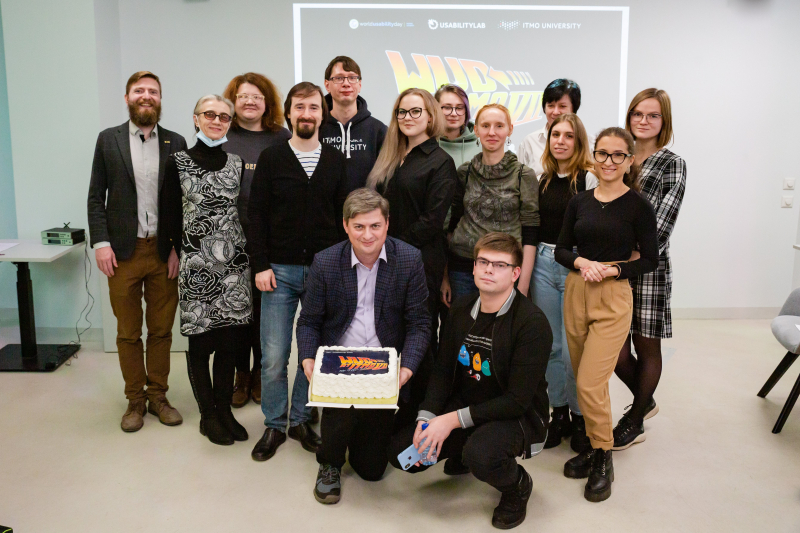 The organizers and participants of the VII International WUD@ITMO Conference. Photo courtesy of the organizers

The conference is a joint effort between ITMO’s Center for Usability and Mixed Reality and the representatives of the Multimedia Technologies, Design and Usability Master’s program, as well as the Moscow-based company UsabilityLab, which has been one of the event’s organizers for the second year running.

“There have been lots of pleasant changes since the first conference. We managed to make a powerful team that unites our staff and graduates who now work at major companies in the fields of usability and human-computer interaction, teach and supervise students, as well as help us find sponsors for the conference,” says Artem Smolin, the head of ITMO’s Center of Usability and Mixed Reality.

This year, World Usability Day in Russia was marked by three online conferences. On the first day, November 11, the UsabilityLab company lined up a series of interviews with UX leaders and the representatives of the Otkritie bank spoke about UX in banking on the second day. The culmination became the WUD@ITMO Conference, which gave the floor to the speakers from Tallinn University, the University of Luxembourg, EPAM Systems, UsabilityLab, 4Blind, SberBank, Wärtsilä Digital Technologies, and Modum Lab.

“The conference gave us room for experiments. We’ve held workshops and debates, both online and in mixed format. In the future, the conference might even take place in a metauniverse,” comments Artem Smolin.

At the conference, Fedor Belomoev, CEO of 4Blind, delivered a talk about the company’s products for deaf-blind and blind people that help them hear and speak, as well as work with graphics and images. With their Braille PADs, visually impaired people can sense images through braille. The pins of the display are placed vertically, thus creating a relief surface.

Alexander Ovcharenko, a UX manager at Wärtsilä Digital Technologies, highlighted the impact of technologies and tools on people’s lives in his report titled Mental Hospital in the Hands of Tools (an allusion to Mental Hospital in the Hands of Patients by Alan Cooper – Ed.). In his words, new devices and programs can, on the one hand, expand people’s horizons but on the other – lead to technology addiction.

The speaker continued by outlining four types of UX tools: one for design (e.g. Figma and Photoshop), one for research (various methods for user interviews and data analysis), and the other two for processes (e.g. Agile methods) and technological tools.

Dmitry Satin, the founder of UsabilityLab, and Andrey Balkansky, the head of ITMO’s Usability Laboratory, had a debate about the interaction between business and higher education institutions. The speakers agreed that while modern business has a shortage of highly qualified specialists and fundamental research, academia is in need of industrial support. The best way to increase academia-business collaboration is by letting students do their internships at companies and promoting joint educational programs.

In his turn, Alexander Volosyuk, a lecturer at ITMO’s Faculty of Software Engineering and Computer Systems, elaborated on the academic environment. ITMO offers Multimedia Technologies, Design and Usability for Master’s students, which includes two specializations: 3D Modeling and Virtual Reality Technologies in Art and Culture and Design of Human-Computer Interfaces. Currently, the students of the second track, are working on a wide range of research projects. They are creating interfaces of recommender systems, digital audio workstations, and mobile apps, as well as studying the interaction experiences of visually impaired users with technologies and visualizing medical records together with specialists from the First Pavlov State Medical University of St. Petersburg.

In 2021, the program welcomed 55 new students, including people over 30 years old, and 31 Master’s students entered their second year.

Recordings of all conference days (in Russian) are available on the official website of the conference.